FEDERICO AND THE WOLF 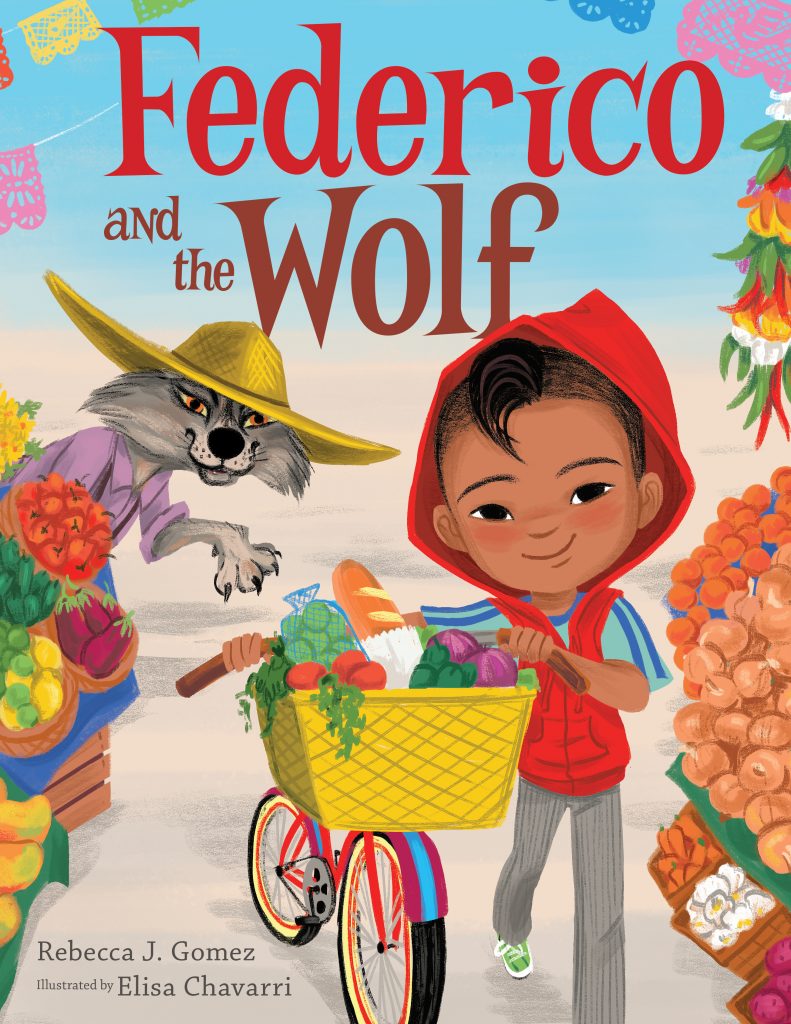 If you love fairy tale retellings, Federico and the Wolf is for you. Rebecca J. Gomez has taken the classic story and not only modernized it, but centered it in the Mexican American culture with great success.

The book’s appeal stems from its endearing main character Federico whose ingenuity and bravery will have young readers rooting for him as he takes on the infamous hungry wolf. And though he sports a hoodie, Federico is definitely not your grandmother’s Little Red. In fact in this version, Federico sets off to the local market “… to buy ingredients to make the perfect pico.” His plan is to get the stuff needed to bring to his abuelo (grandfather), then together the two can make a special salsa. The market art (see below), like so many other illustrations in this delightful picture book, is a razzle dazzle of glorious color and atmosphere. As a reader I wanted to jump into the scene.


On his way to see Abuelo, Federico heads through the city park and deep into the woods on his bike. It’s not long before the famished wolf stops him looking for “grub.” The young boy, however, claims he has no time or food to spare. When he arrives at his grandfather’s shop, Federico notices a suspiciously furry and pawed person beckoning him inside.

At first it might seem that Federico’s been taken in by Wolf’s disguise, providing the kind of suspense kids love. But, once he realizes what he’s up against, the clever lad resorts to clever measures. I won’t spoil the spicy ending, but suffice it to say that because of Federico’s quick thinking, the chances of Wolf ever returning are rather slim. When grandson and grandfather are finally safe from the the wolf’s conniving clutches, the pair can begin to prepare the pico as originally planned.

Chavarri’s vibrant illustrations work beautifully with the prose, helping to set the tone of this excellently executed fractured fairy tale. The pictures are light and lively when Federico is happy and they get darker whenever the wolf is present.

Gomez, with her wonderful use of rhyme, brings a spirited approach to this tale that invites multiple readings. I love how she’s incorporated Spanish words into the story. They not only feel natural, but add to the ambience of Federico’s world. Kids can figure out the words’ meaning many times just by looking at the illustrations such as silla for chair. Readers can also take turns playing the parts of Federico and Wolf for added enjoyment. A glossary in the back matter along with a recipe for the salsa tops off this read aloud treat. By all means, add this new picture book to your story time collection. And, remember to carry some chili powder in your hoodie pocket if you plan a walk in Wolf’s neck of the woods.


Find out more about Rebecca here.

Find out more about Elisa here. 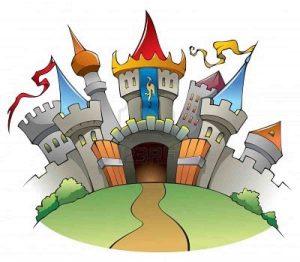 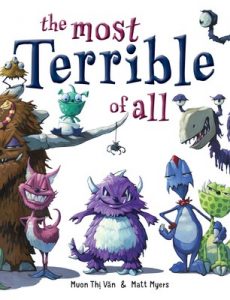 THE MOST TERRIBLE OF ALL
Written by Muon Thị Văn
Illustrated by Matt Myers
(Margaret K. McElderry Books; $17.99, Ages 4-8)

If you like fairy tales, Muon Thị Văn’s new spin on Snow White will enchant you. Snow White and the dwarfs aren’t featured, rather the focus is on the Magic Mirror used by the Evil Queen. In The Most Terrible of All, the queen has been replaced by Smugg, a lovable monster. Smugg is certain he’s the most terrible beast in the land—his mirror tells him so. Until, one day, when he’s out-terribled by someone new, someone “a million times more terrible.” Not one to sit idly by, Smugg goes in search of this interloper. His quest takes him all the way . . . next door where a houseful of fiends are all potential contenders for the title of Most Terrible.

This ghoulish fractured fairy tale delighted me. Matt Myers’s art features lovely blues, greens, purples, and pinks giving the book a calm vibe even though the action’s quite exciting. His “ginormous sea serpent” is wonderfully scary and my favorite creature in the book.

Kids will enjoy this picture book because it’s a funny version of a story they already know. The monsters are charming and the ending is just perfect. 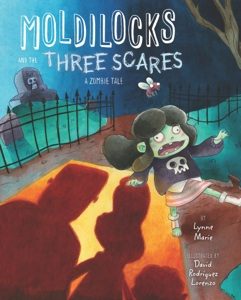 Goldilocks has gone ghoulish in Lynne Marie’s picture book, Moldilocks and the Three Scares: A Zombie Tale. The Scare family—a monster dad, mummy mom, and vampire daughter—are enjoying a lovely night together preparing a midnight snack of sliced finger sandwiches and Alpha-Bat soup. But, of course, the soup is too hot; it boils Dad’s bolts, causes Mama to unravel, and gives Baby a fang-ache.

David Rodriguez Lorenzo illustrations are deathly cute. Details enliven each scenes. The page that enchants me is Moldilocks zombie-stumbling across the dining table with a fly escort. The three chairs are perfectly suited for each family member. Their décor is skeletal chic. A skull vase displays withering flowers, an old-fashioned TV’s rabbit ears appear to be femurs, and the standing lamp is a headless skeleton holding up its lampshade.

Pay attention to the opening pages because those lines will come back to haunt you with the book’s modern ending. When the Scares catch Moldilocks in their ghastly abode, Mama muses that her “nightmares have been answered”; I think Moldilocks would agree. 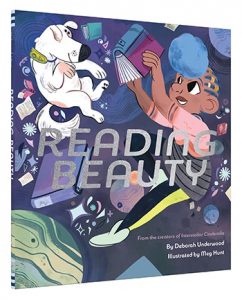 
The winning team of Deborah Underwood and Meg Hunt from Interstellar Cinderella are together again in Reading Beauty, another rhyming fractured fairy tale picture book. In this version, instead of the princess pricking her finger on a spinning wheel, Princess Lex lives in a book-loving kingdom and is cursed to go into a deathlike sleep from a paper cut. Therefore, all books are secreted away on her fifteenth birthday.

“Without its books, their world grew bleak, consumed by dark and gloom.” Luckily Lex’s cute puppy, Prince, has been trained to fetch her things to read. I like how this smart princess takes matters into her own hands, especially the funny scene where Lex fools the fairy.

The art pops from the page. A bright blend of classic fairy tale and futuristic wonder will delightfully transport readers into a modern world. You’ll have to pick up your own copy to discover the creative ending. 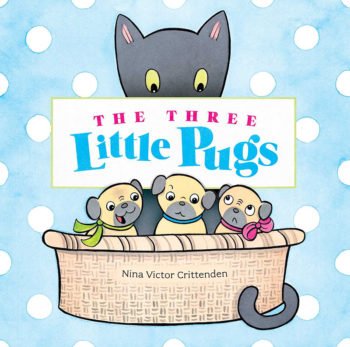 Pugs replace pigs in Crittenden’s humorous THE THREE LITTLE PUGS, while the huffing-puffing wolf becomes a snoozy-sleepy cat who takes over the pugs’ cozy bed. Playing off the traditional story’s theme to build with straw, sticks or bricks, the pugs employ familiar household substitutes. Drinking straws, drumsticks and snaplock toy bricks don’t help the pups oust the cat from their wicker bed basket. How can the pug trio broker a lasting peace with the snoozing intruder?

Crittenden’s light, bright illustrations are perfectly suited to the short, sweet text full of rhyme and repetition. There is plenty of action from the busy and resourceful pups to keep the pages turning quickly. While this pug-a-licious tale could convince a few toddlers to embrace their nap schedules, the twist ending also lends itself as a fresh bedtime story selection perfect for a cuddle and a snuggle, pug-style. 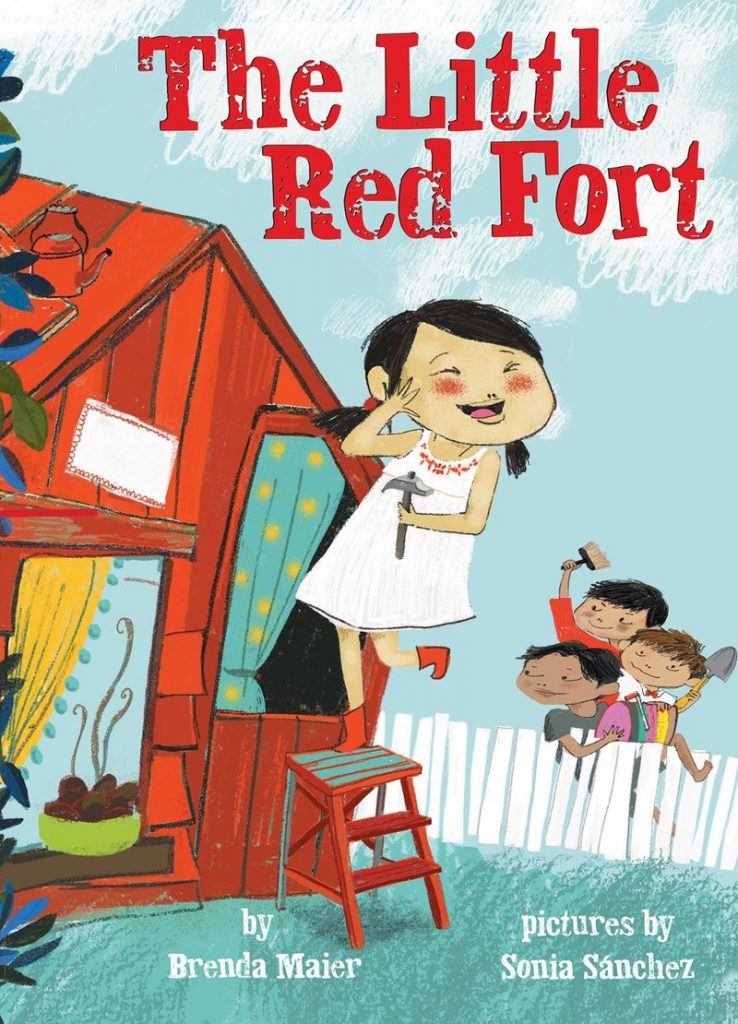 The Little Red Hen becomes an able, ambitious little sister in Maier’s THE LITTLE RED FORT. Young Ruby wants to build a backyard fort, but her brothers refuse to help. When they say “You don’t know how to build anything,” Ruby shrugs and responds “Then I’ll learn.” She forges ahead with drafting plans, gathering supplies and cutting boards. Along the way she is skillfully assisted by the adults in the family (parents and a grandmother!) Once the fort is finished, Ruby is satisfied with some peaceful solo playtime until her brothers express an interest in her awesome project. Will they find a way to make it up to Ruby after scorning her efforts? The clever twist ending is modern, engaging and satisfying for all.

Sánchez puts bold colors and loose, sketchy lines to vibrant use, portraying pig-tailed Ruby with determination and enthusiasm. The large, textured images are well-matched to Maier’s subtle patterned prose, echoing the traditional text in format and expanding the storyline to contemporary sensibilities. Determination, cooperation and creativity are powerful themes woven into the story with care while simple childhood fun and warm family life will be foremost in readers’ minds.