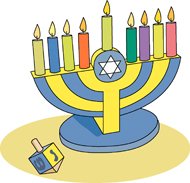 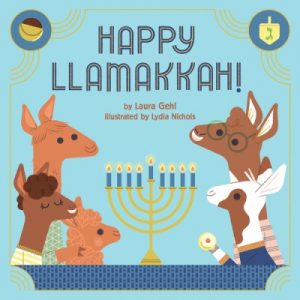 In the colorful picture book, Happy Llamakkah!, adorable llamas young and old gather together for the eight-day Jewish celebration. Each night a new candle is lit by the shamash (helper candle) as dreidels spin, latkes are fried and ribbons are tied. The story is told with few words and many sweet faces of the llama family who end each of the eight nights saying Happy Llamakkah! Children familiar with Hanukkah will enjoy seeing the candle lighting as it reminds them of their own special Hanukkah traditions with every page turn. And the words “Happy Llamakkah” replacing the traditional Happy Hanukkah wish just adds laughter and fun for young readers. I personally laughed each time I read those words. This rhyming picture book closes with an Author’s Note which explains in simple terms why Jewish people celebrate the miracle that happened long ago. Happy Llamakkah! beautifully tells the story of the menorah in the window; and I liked how the reader learns that it was only recently that Jewish families incorporated gifts as part of their Hanukkah festivities. Happy Hanukkah!
• Reviewed by Ronda Einbinder 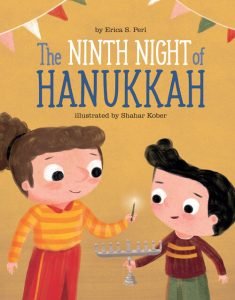 In The Ninth Night of Hanukkah, Max and Rachel’s family move to a new apartment right before Hanukkah begins. So it’s frustrating when they can’t find the box that was packed with all the items they need for Hanukkah: the menorah, candles, Dad’s lucky latke pan, dreidels, gelt, and jelly donut recipe. So how can they celebrate Hanukkah? With help from their new neighbors and a bit of innovative, creative thinking, they try each night to celebrate, although as the refrain says, “It was nice . . . but it didn’t feel quite like Hanukkah.” But when Mom’s guitar is delivered the morning after the eighth night, the kids come up with a way to still celebrate the holiday and give back to all their new neighbors who helped them. . . and when the missing Hanukkah box turns up, it finally feels like Hanukkah. Charming cartoon illustrations add to the warmth of this holiday book about a diverse and multi-ethnic community coming together in friendship. • Reviewed by Freidele Galya Soban Biniashvili 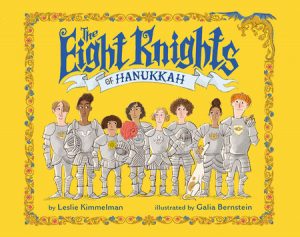 I had a smile on my face throughout my first reading of this clever new take on Hanukkah and again the second time to write this review. Kimmelman’s wordplay in The Eight Knights of Hanukkah makes for a fun Round Table themed romp that delivers in the form of eight knights named Sir Alex, Sir Gabriel, Sir Henry, Sir Julian, Sir Rugelach (♥), and three females, Sir Isabella, Sir Lily, and Sir Margaret. There’s also Lady Sadie whose request to the knights prompts the adventure and premise of this story. “A dastardly dragon named Dreadful is roaming the countryside,” and its antics are disrupting preparations for the Hanukkah party she’s been planning. Their mission is to “fix things with some deeds of awesome kindness and stupendous bravery.”

And so they set out to achieve this goal. While Sir Isabella and Sir Rugelach journey to find Dreadful, the other six knights assist the citizens in whatever way they can. Knightly language adds to the enjoyment, “Hark!” exclaimed Sir Gabriel. “Methinks I hear a damsel in distress.” Whether peeling potatoes to help said damsel or making sufganiyot (donuts) at the bakery where a sign reads “Helpeth Wanted,” there’s no task too arduous for the team to tackle. But what about Dreadful? Alas, the disappointed dynamic duo of Sir Isabella and Sir Rugelach fear they’ve exhausted all hopes of reining in that dragon until a smoky surprise greets their eyes. With their mitzvahs completed, the noble knights can begin their Hanukkah merrymaking with Lady Sadie and all the guests knowing their actions have spread kindness through the realm. In addition to Bernstein’s expressive characters, humorous details, and great use of white space, don’t miss her endpapers map to get a lay of the land.
• Reviewed by Ronna Mandel 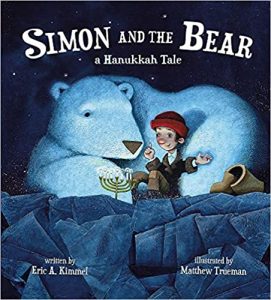 SIMON AND THE BEAR: A Hanukkah Tale
Written by Eric A. Kimmel
Illustrated by Matthew Trueman
(Little Brown BYR; $12.99, Ages 4+)

First published in 2014, this paper-over-board reissue features a newly formated cover ideal for younger readers. Somehow I missed the original version and was happy to find that Kimmel’s Simon and the Bear: A Hanukkah Tale had me turning the pages in anticipation as it also warmed my heart.

When Simon sets sail to America from the old country just before Hanukkah, he departs with inspiring words (and a knapsack full of latkes, a menorah, candles, matches, brown bread, hard-boiled eggs, and herring) from his mother. “Wherever you are, Simon, don’t forget to celebrate Hanukkah and its miracles. Who knows? You may need a miracle on your long journey.” This foreshadowing lets readers know something will happen, but I never expected a Titanic-like episode where Simon’s boat sinks. Mensch that he is, he offers the last spot in a lifeboat to an older man and manages to find safety on an iceberg.

All alone but ever the optimist, Simon lights the candles as Hanukkah begins. As he plays dreidel, he also prays for a miracle. He is surprised and slightly scared when a polar bear appears. Simon offers it food in exchange for warmth and company. The passing days see the bear share his fish with Simon until the menorah’s flickering lights attract a rescue boat on the final night of Hanukkah. Arriving safely in New York, Simon meets the man he gave his lifeboat spot to. Now the Mayor of New York, this grateful man is intent on repaying Simon’s good deed making the final miracle happen, bringing Simon’s family to America. Kimmel’s crafted a fantastical and truly satisfying story through and through. In the character of Simon, he’s brought us a selfless main character readers will root for. Trueman’s jewel-toned colors and shtetl clothing design help ground the story in the early 1900s. The play with light always brings our eyes to focus on Simon over multiple iceberg scenes. Together the story and illustrations (I love the newspaper clippings about Simon’s survival) will make any reader a Hanukkah miracle believer.
• Reviewed by Ronna Mandel 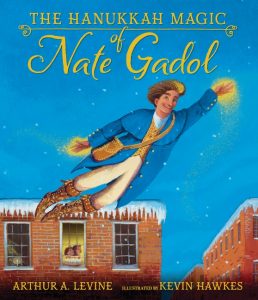 The magic of Levine’s, The Hanukkah Magic of Nate Gadol, begins with its glowing golden accented cover and is woven throughout this picture book embuing it with a feeling that it’s always been a Jewish folktale parents share every holiday. But it’s not! It’s a new story about a big-hearted Jewish spirit “whose magic can make things last exactly as long as they’re needed.” The tale was inspired by the author’s observations and emotions he experienced growing up as a Jew whose holiday and beautiful traditions were overlooked, overshadowed, and ultimately influenced by Christmas. Read the illuminating Author’s Note for more on this. Nate’s name is also significant in that it corresponds to the dreidel letters Nun and Gimmel, two of the four initials representing the Hebrew phrase “Nes Gadol Haya Sham,” meaning, “A great miracle happened there.“

I was willingly transported to an unnamed American city in the late 19th century where immigrants of all nationalities lived and worked. Nate soon finds himself drawn to the plight of the Glaser family, newly arrived Jewish immigrants from Europe who are penniless as Hanukkah approaches. Additionally, their neighbors’ baby girl is sick and the O’Malley family cannot afford the medicine needed. Whatever the Glasers had they shared with their close neighbors but when there was nothing, Nate knew “he couldn’t stretch what wasn’t there.” How could either family even begin to think about celebrating Hanukkah or Christmas under those circumstances? The have-nots need a miracle. During a serendipitous meeting Christmas Eve on a city rooftop with Santa Claus, Nate is told, “The sleigh magic is nearly empty. Are there a lot of people having trouble believing this year?” The winter of 1881 is a tough one indeed meaning one thing; Nate to the rescue! He helps out the “red-suited man” who returns the favor in kind. Nate’s magic delivers Christmas presents under the O’Malley tree and, much to the surprise and delight of the Glaser children, not just beloved Hanukkah chocolate which was all they usually hoped for, but a pile of presents as well.

Hawkes’s muted color palette enhances the illustrations of this bygone era. His larger than life depiction of Nate Gadol, with a tinge of gold in his hair and a sparkle in his eye convey a positive mood despite the harsh circumstances the two families face. The pairing of Hawkes’s atmospheric art with Levine’s thoughtful prose makes a new story like The Hanukkah Magic of Nate Gadol already feel like it’s been a treasured read in our home for years.
• Reviewed by Ronna Mandel

The third book in this charming series.

Read Ronna’s review of this middle-grade paperback in L.A. Parent magazine below.

A Dreidel in Time – A New Spin on an Old Tale