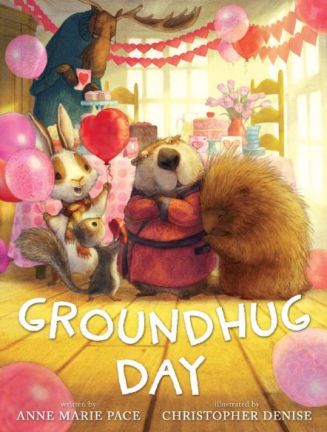 Groundhug Day is a picture book delight that seamlessly weaves a heartwarming and credible friendship story together with Groundhog Day and Valentine’s Day holidays. Making a themed book that can be read on more than a few days each year is a feat few authors and illustrators attempt, but the winning combination of Anne Marie Pace and Christopher Denise have managed to pull this off quite successfully!

Moose is planning a Valentine’s Day party and he’d like to celebrate with all his pals. There is however just one little hitch. While Bunny, Porcupine and Squirrel can attend, if Groundhog sees his shadow on Groundhog Day, he’ll “go back into his hole for six more weeks.” In other words, he won’t emerge in time for February 14th festivities. So it’s no surprise that when Groundhog comes out and sees his shadow, he’s quick to head back down, but hints there’s more to it than that. Ever the intuitive one, Moose thinks perhaps his pal is afraid of shadows. Determined to show Groundhog that shadows aren’t scary at all, Moose enlists help from his friends to demonstrate “just how awesome shadows are.”

Here’s where young readers, already drawn into the story, will be treated to several beautiful pages of illustrations (in addition to to all the other striking artwork in warm welcoming tones) showing what wonderful things shadows are and can do. It’s easy to feel the joy both author and illustrator felt about creating this lovely picture book. More fun times are in store because, despite no longer being fearful of shadows, Groundhog must still get his six weeks of sleep! This tale, honoring the support that genuine friendship offers, is both a sweet and satisfying read that has all the feels you’d want from a picture book. 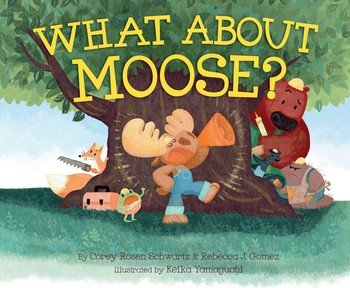 Tonight I attended a book launch by Los Angeles illustrator, Keika Yamaguchi, at the Casa Verdugo branch of the Glendale Public Library. I not only learned about her illustration process to create the artwork for What About Moose?, but I also got to watch the reactions of dozens of children in attendance. By their response, I knew the books would fly off the shelves.

This recommended-for-read-aloud rhyming picture book introduces youngsters to Moose, Fox, Bear, Skunk, Frog, and Porcupine who intend to build a treehouse together, through teamwork. Moose, however, has other ideas and proclaims himself foreman. As he issues order upon order, Moose’s behavior does not endear him to his friends. In spite of this, there is humor to be found on every page both in the rhymes and illustrations. Kids’ll eat up the fact that Moose has taken to giving his “commands from a big megaphone.” His bossiness will not be lost on children as they sense the tension building between Moose and his pals as every so often one of them asks, “But what about you, Moose?” Soon your child will be asking the very same thing, quite eager to see how Moose will respond. In fact, he’s so busy ordering his friends around that he neglects to notice the treehouse built around him. It’s only once the roof is put on that Moose realizes the door is too tiny for him to fit through!!

Luckily for Moose, his friends are a caring bunch. They hatch a plan to help him get out of the house safely because how long can the animals bear to listen to Moose’s complaints as he “groaned and he grumbled. ‘It’s squishing my butt,'” to which Fox replies, “We’ll help you … if you keep your mouth shut!” That line, incidentally is one of my favorites although far from being the only one!

The constructive ending is more than satisfactory and will give parents an opportunity to talk about the benefits of teamwork. The illustrations are adorable and, though Moose was by far the favorite character judging by hands raised when that question was posed to the attendees, Bear was a close second. I must add that in Yamaguchi’s talk this evening she explained to the audience that she had to do a lot of research on how to build a tree house before she could approach the illustrations. Well, it appears she’s learned how!