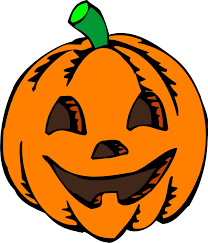 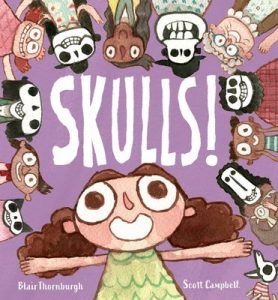 For Halloween or any day for that matter, Skulls! will entertain young readers with its eye-opening facts and fun watercolor illustrations featuring oblong faces and childlike representation.

Blair Thornburgh’s hit the nail on the head with this unique picture book that introduces kids to an important part of the human body via an adorable young narrator. Made up of twenty-two different smaller bones, the skull accounts for “about 10 percent of our body weight” but we often don’t think about it. When we do, as Thornburgh points out so perfectly, it’s absolutely amazing, kind of gross and thoroughly entertaining.

We tend to take for granted how a skull is “like a car seat for your brain,” keeping it safe and in place. It’s also actually full of holes otherwise it would be so much heavier. “But most important of all: skulls are not trying to be scary.” Once kids learn about all the cool skull-related things shared in Skulls!, they’ll probably want to share them with you, especially the jaw and mouth ones. And when they do, they’ll probably ask for a grilled cheese sandwich which means they’ve learned something. After they’ve eaten they’ll probably thank you for helping their “skull grow hard and strong.” In turn, you can use your mandible bone and connecting muscles to smile. 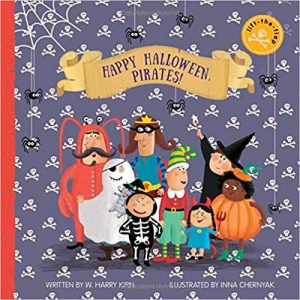 Happy Halloween, Pirates! is a large-sized, kid-friendly, 18-page lift-the-flap board book that’s a rollicking, rhyming read aloud for Halloween. Toddlers will love hearing the story then peeking under the flaps to see what treasures the illustrator has buried beneath.

Shiver me timbers! A pirate crew receives an invitation via crow to a Halloween party. The action starts immediately as they and assorted pirate ship creatures (a cat, some mice) plan their costumes.

Next the pirates go ashore to have some fun with friends galore. They find the haunted party house and join in the festivities. Whoa! The kids who invited their sea-faring pirate pals surprise them by dressing up as pirates themselves on board a mini pirate ship! Between the flowing rhyme, the interactivity of the flaps and the vibrant artwork, children will stay entertained this Halloween as they play with and say Happy Halloween, Pirates! And who doesn’t enjoy a pirate party? 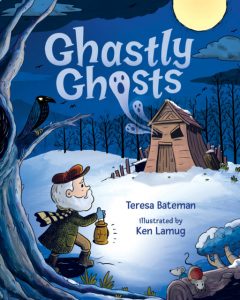 My level of manageable frightening can be found in Ghastly Ghosts. This pleasing and well paced rhyming picture book starts off by setting a Halloweenish mood, but the main character, Old Dave, refuses to be scared by the moaning noises emanating from coal shed. The rhyme works wonderfully in moving the story forward with a subtle upbeat vibe so as not to make little ones’ (or my) hair stand on end. The art style is appealing with a lovely palette that also keeps the fright level slight.

Old Dave wishes for some company as it gets lonely up in the middle of nowhere which is exactly where he lives. But alas, no one goes out on a night so dark and freezing, and if they do it’s not to the place where a ghostly choir can be heard loudly saying, “Ghastly ghosts in the old coal shed!” Oh how I admire Old Dave’s guts. Rather than cower at the scary sounds, our hero faces off with the spirits who he reckons might also enjoy the warmth of his cottage once he replenishes his coal supply. Still more of the “Ghastly ghosts …” chorus erupts, but they’re interrupted by brave Old Dave. “I know. I do. I’d like to bet you’re cold ghosts too.” Together with the ghosts, Old Dave’s coal pail gets filled and everyone is welcome in his now warm and cozy place. “In fact, they’re quite good company. His friendless nights are history.” 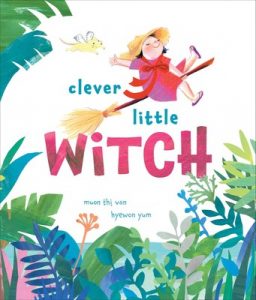 Clever Little Witch is more of a sibling tale than a Halloween one, but since witches abound during this season, it still feels appropriate to share. Plus Thi Van has written a story that will definitely resonate with older kids who’d like nothing more to get rid of their younger siblings.

In this charming picture book narrated by Little Linh, we learn instantly from her that she’s “the cleverest little witch on Mãi Mãi Island” if she does say so herself! She tells us what she needs which are a broomstick, a book of spells and a rare and magical pet. What she doesn’t need is an annoying baby brother who does things like ride her broom without asking, chew pages from her spell book or use her magical mouse “as a flashlight.” Yup, the little guy’s gotta go!

Baby Phu is offered around by his older sister, but no one on the island has any desire to take her little bro off her hands. Nope, not the troll, not the forest fairy queen and not the Orphanage for Lost and Magical Creatures. Youngsters will get a huge kick out of these scenes when the reasons why Baby Phu is rejected are explained. The troll, for instance, got hiccups from the last baby brother he ate.

When Little Linh turns to her magical book of spells she sees that “Baby Phu had eaten half the spell.” Clever as she was, she could certainly figure out what the rest was and transform her brother into a goldfish. When the spells go awry and she creates first a frog, then a seal and finally a dragon that steals her wand, things are not looking good. The story’s heroine chases the dragon on her broom. But when the dragon’s tail accidentally knocks down the broom and Little Linh begins falling, guess who comes to her rescue before she crashes to the ground? YES—the dragon, much to her surprise! Does the dragon stay a dragon or does he turn back into Baby Phu who becomes more appreciated? Ahh, you’ll have to visit Mãi Mãi Island to see for yourself! Hyewon Yum’s illustrations of acrylic gouache and color pencil are full of energy. The variety of colors she uses exudes a warm and happy feeling with every page turn. What a sweet, humorous and imaginative sibling story to share with kids!

GINNY GOBLIN CANNOT HAVE A MONSTER FOR A PET
Written by David Goodner
Illustrated by Louis Thomas
(HMH BYR; $17.99, Ages 4-7)

Ginny is a force of nature and, though perhaps not the best role model for children, will definitely make them laugh and maybe even answer back to the narrator speaking right to them, and that’s just what an ideal read aloud like Ginny Goblin Cannot Have a Monster for a Pet should do.

As I read this picture book, the follow-up to Ginny Goblin is Not Allowed to Open This Box, I thought about a little girl some 22 years ago. No matter what her parents told her, she’d do the opposite. I always worried about her, but she’s actually doing great now that she got all those wild escapades out of her system … and a horse as a pet.

What’s so fabulous about this story is that Ginny’s crazy antics ultimately get her just what she wanted in the first place which is a goat, a non-monsterish pet unlike all the unbelievable others she goes in search of page after riotous page to drive her point home. Whether it’s on a beach where the narrator hopes “she’ll find a tropical fish, or a cute little hermit crab,” Ginny always has something else in mind and goes for it. In one case that means going into the deep, dark sea in a submarine seeking a kraken. We’re reminded that krakens “are unfathomable monsters, and Ginny Goblin cannot have a monster for a pet.” I can just hear the kids at story time repeating that phrase and loving it.

So what do you suppose happens next? You guessed it, as will young readers. Down she goes into a cave in search of a dragon. That sized pet won’t fit in a house will it? So of course Ginny’s taken to a forest where birds who make great pets live. Ha! Instead Ginny catches a basilik, but a magical pet isn’t the answer either. If you think she’s done thinking about getting a monster for a pet because she’s distracted by a visit to a space museum, think again. Ginny commandeers a rocket to outer space where an acid-spitting alien is on her agenda but not the narrator’s.

Goodner skillfully brings the readers and Ginny back to Earth where the idea of a pet like a goat is suddenly looking a lot better than it originally did! Paired with Thomas’s whimsical gouache and pen-and-ink artwork, Goodner’s prose take youngsters on an amusing and mischievous  journey that will delight them and anyone lucky enough to read the story to them.

Skelly & Femur, by Jimmy Pickering from Simon & Schuster Books for Young Readers
is reviewed by Trevor, age 6. Trevor is entering 1st grade in Long Beach and has previously
reviewed for Good Reads With Ronna.

Many things go missing in Skelly Manor. Where has everything gone?

The main characters are a skeleton girl, Skelly and her dog. I liked figuring out what happened. This is a story that maaaaybe (sic) could happen. The illustrations were colorful and really looked beautiful and cute. I liked them. I would tell all my friends to read this book and I would read a lot more from this author.

Parent Note: The illustrations were quite good. Trevor paused at each page to look carefully at the details before reading aloud the fairly easy words. It was fun to try and figure out what happened, but the ending wasn’t really on anybody’s radar.