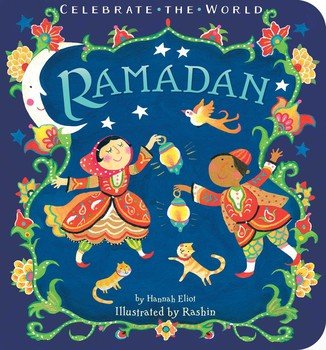 I’m happy to share Ramadan, the first book in a new board book series from Little Simon geared towards preschoolers called Celebrate The World. “The series aims to show readers how different cultures celebrate and cherish the holidays important to them.”

Alluding to the lunar calendar, Ramadan takes places in the ninth month of the year “when the crescent moon first appears in the sky …” With its 24 pages of ebullient illustrations, Ramadan is a cheerful and easy-to-understand introduction to the Islamic holiday observed by over a billion Muslims across the globe. Little ones learn that during the monthlong fast of Ramadan, eating occurs “only when it is dark outside,” and involves prayer, introspection and spending time with family and friends. Other important aspects of this holy holiday include being “thankful” and helping others. When the month has ended, Muslims celebrate Eid al-Fitr, also known as the Sweet Festival, for three days during which time they “pray” and “give each other gifts.”

Eliot has included just the right amount of information to pique a preschooler’s curiosity. The simple language that is used works perfectly with Rashin’s festive and upbeat artwork conveying the impression that both author and illustrator thoroughly enjoyed working on this book. That said, I have no doubt that readers will agree. The depiction of the crescent moon, the men kneeling in the mosque, and all the fabulous food scenes are sure to please. I look forward to all the other books in this series if they’re as well crafted as Ramadan. They’ll be popular for parents and educators alike for being a positive way to help youngsters understand and welcome traditions from near and afar. 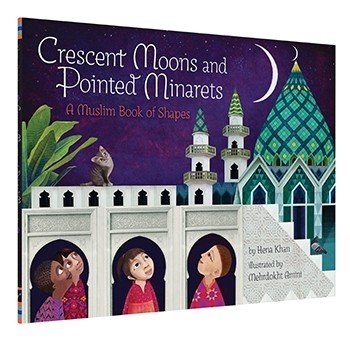 Khan’s spare, rhyming text introduces readers to various shapes, but it’s much more than a book about shapes. Every spread spotlights a different aspect of Islam. For example, we learn that a minaret (with a cone-shaped roof) is the tower in a mosque from which the call to prayer is broadcast; a daff is a large circular drum; and the Ka’aba (a word which means “cube” in Arabic) is a holy temple in the city of Mecca. A glossary at the end of the book provides definitions and an author’s note explains the important connection between Islam, shapes, and geometry.

I savored every page of Amini’s exquisite mixed media illustrations. Vibrant colors and detailed patterns, including some incredible tilework, draw the eye in and keep it lingering long after Khan’s lilting, rhythmic text has been read. As an added bonus, every spread depicts a different country (though there’s no mention of it in the main text). In an interview with Deborah Kalb, Khan indicated that Turkey, Tanzania, and Malaysia are represented. I imagine that trying to guess where each scene is set could lead to some terrific conversations.

Usually, shape books are aimed at a very young audience, but Khan and Amini have added so many additional layers to the “shape” concept, that readers of all ages will surely be drawn to this beautiful book. And given that hate crimes against and harassment of Muslims have spiked in the past several years, a book that sheds light on their traditions and family life is especially important. After all, as Khan told School Library Journal in 2013, “Educating kids about different cultures is key to building tolerance and acceptance.”

While readers who practice Islam will enjoy seeing themselves on the pages of this gorgeously illustrated book, as a non-Muslim, I relished the opportunity to learn about some of the traditions, art, architecture, and culture surrounding the world’s second largest religion.

Author Hena Khan is on tour with her new chapter book, Power Forward, the first in a series. Click here to see if she’s coming to your town! 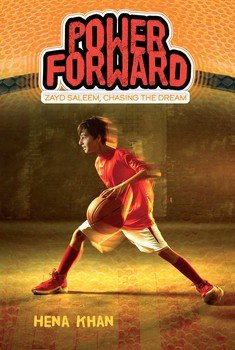 I have to admit—I don’t read a lot of books about sports. But that didn’t stop me from enjoying the first book in Hena Khan’s new chapter book series one bit. I bought a copy of Power Forward (Zayd Saleem, Chasing the Dream) for my nephew at one of Khan’s book signings (the first on her tour) then, as soon as I got home, read the entire thing in one sitting.

Fourth grader Zayd Saleem eats, sleeps, and breathes basketball. He’s on the D team (for now) but with practice he knows he can make the Gold team. Tryouts are two weeks away and he needs all the help he can get. That’s why he bails on his early morning violin practice and plays basketball instead—and he’s actually improving. But when Zayd’s mom discovers he’s been skipping violin and lying about it, the punishment is harsh: no basketball for two whole weeks. And that means no tryouts.

Zayd narrates his tale with a good dose of humor, but the humor never comes at the expense of emotions. We feel deeply for our narrator as he tries to make space for his own dreams while meeting his parent’s expectations. But something’s got to give—and Zayd will need to stand up for himself if he wants to keep those dreams alive.

Family plays a big role in this story and Khan does a terrific job of crafting real characters that we want to spend time with. Zayd’s got an annoying older sister, a fun-loving uncle, an adoring grandmother, an understanding grandfather, and parents who really want what’s best for their son—readers may find themselves wishing for an invitation to dinner.

Sports fans might open Power Forward for the basketball, but they’ll keep reading for the humor, honesty, and cozy warm feeling of being part of the Saleem family. And luckily, they won’t have to wait too long to join the fun again. The next two books in the series hit the shelves soon. Look for On Point (Zayd Saleem, Chasing the Dream, Book 2) on May 29, 2018 and Bounce Back (Zayd Saleem, Chasing the Dream, Book 3) on October 2, 2018. Let’s hope there are many more to come!

• Both books reviewed by Colleen Paeff