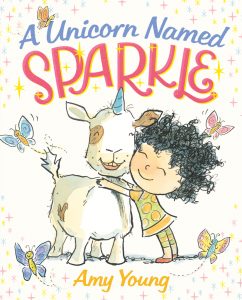 Carving out a new niche in the unicorn-book market may seem a difficult task, but A Unicorn Named Sparkle by Amy Young accomplishes this task with humor and flare. When Lucy finds a mail-away ad stating, “Unicorn, 25 cents,” she, of course, sends her quarter off to Unicorn City, New Jersey, barely able to wait.

Meanwhile, Lucy imagines all the wonderful things they’ll do together. She’ll name her unicorn Sparkle and “he will be blue with a pink tail and pink mane.” To ease him into her world, she plans to give him a cupcake.

When the big truck rumbles up, Lucy’s cupcake disappears in one chomp. I must note that this is a great image—just the unicorn’s mouth coming out of the shipping crate, snapping down the cupcake – terrific!  What emerges from the shipping crate doesn’t quite match Lucy’s expectations. “He had spots. His ears were too long. He smelled funny. Oh, and he had fleas.” And that’s just the beginning. 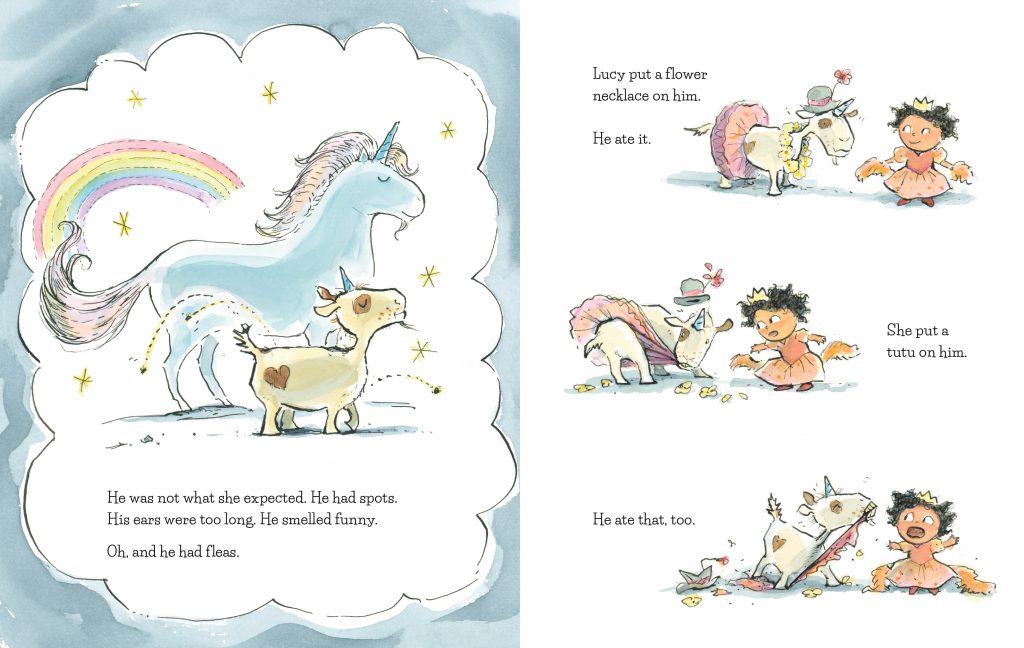 Playing together doesn’t go the way she planned either. So Lucy does what every frustrated shopper would: she phones Unicorns, Inc., and tells them to take Sparkle back. While she awaits the truck’s return, Lucy gets to know Sparkle and even stands up for him when neighborhood kids tell her that Sparkle looks like a goat. Of course we all know that Sparkle is a “special kind of unicorn.”

In this tale of friendship and discovery, Lucy comes to the conclusion that you may not get what you expected—and that can be just fine too.

Author and illustrator Amy Young’s A Unicorn Named Sparkle is a truly enjoyable read, ideal for the pre-K crowd. And her vivid, expressive images are well-matched to the text. Sparkle may not be the handsome unicorn we imagined, but he surely will capture our hearts.

A little girl’s good intentions enable her to accomplish what grown men could not in
Twelve Dancing Unicorns, by Alissa Heyman with illustrations by Justin Gerard, (Sterling Children’s Books 2014, $14.95, Ages 4-7).

Those of you familiar with The Twelve Dancing Princesses by the brothers Grimm, will enjoy this enchanting adaptation of the popular fairy tale. For those of you who haven’t read Grimm’s fairy tales, Twelve Dancing Unicorns, a stunning new picture book, easily stands on its own.

Despite being guarded by his finest men, the king finds his twelve prized unicorns mysteriously break free of their golden chains each night unseen by the watchmen. People come from all over the land to see the unicorns, but one young girl has grown particularly fond of the smallest one. She sees the creatures are unhappy being cooped up, and wants to help them.

When the king offers to grant a wish to anyone who can solve the mystery of the broken chains, the girl is the first to step up. Laughed at by the townspeople, and chided by the king for being too young to handle such a task, the girl remains undaunted. With the help of her mother, who gives her an invisibility cloak, and the bright moonlit sky, the girl discovers the unicorns’ secret, and has quite an adventure in the process.

I was reminded of Jan Brett’s illustrations, as I got lost in Gerard’s ability to capture otherworldly beauty in his work. His use of page and picture boarders provides a classic fairy tale feel to a modern book. I found Heyman’s lyrical story book style of writing very appealing; her words capturing the wonder and glory of the mystical world of unicorns.

Twelve Dancing Unicorns: a must read, must keep, and must pass down from generation to generation picture book.