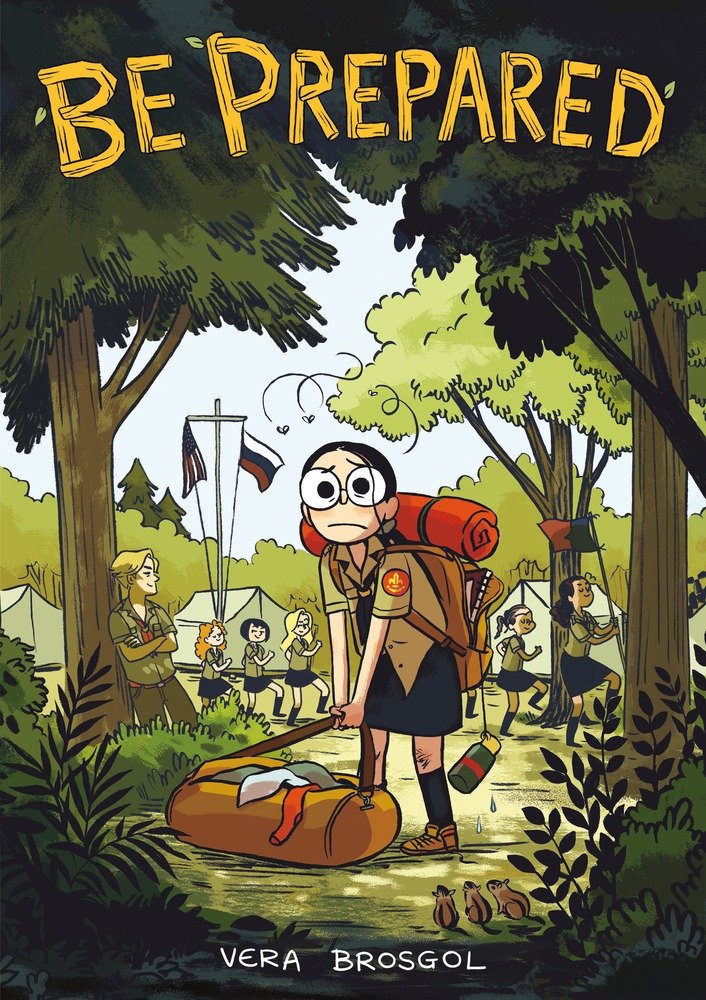 Be Prepared, a middle grade graphic novel written and illustrated by Vera Brosgol, is the book I needed in middle school. Aside from the fact that I never actually got to go to summer camp, I imagine my experiences would have been eerily similar to the protagonist’s trials and tribulations, including the torture of the unknown when it came to outhouse bathrooms. (I did go camping a lot and have never met a Port-a-Potty I liked, but then, who has?). The expressive and verdant illustrations truly capture the specific tumultuous emotions of tweens and beyond and captured my heart with the integrity and honesty given to this age group.

Even though your kids are back to school with visions of summer lingering in their heads, Brosgol’s novel will help quell some of those summer pangs. Written from the perspective of a young Russian girl named Vera who is trying to fit in with her peers, Be Prepared simultaneously pulls the reader into an immediate place of recognition as well as a fresh perspective from a Russian family.

While her friends have big houses and to-die-for birthday parties, Vera struggles to gain acceptance in her smaller home she shares with her Mom and little brother. When Vera finds out from a Russian friend at Temple that a special summer camp exists geared towards Russian kids, she almost explodes with delight at the thought of going to a camp where she can relate to her peers and make some new friends. Since her school peers have been to sleep away summer camps and trips all over the world, Vera listens intently and absorbs information as they talk extensively about it all, hoping that following this summer she’ll have camp stories to share as well.

Vera and her brother have never been to summer camp, and she is determined to convince her mom that they should both go. And they do. As the first day of camp approaches, Vera is bursting at the seams. Her younger brother remains apprehensive. Thrown into the midst of a tent with two older campers who are seasoned participants, Vera’s welcome is not what she had in mind. Initially frowned upon for being so young, Vera’s artistic skills impress the older campers and they start asking for drawings. In return, Vera is suddenly at the center of attention she always thought she wanted. But giving away her art quickly turns into giving away her contraband candy stash as well as turning a blind eye to other campers she might have a genuine connection with. When Vera is caught with candy in her shared tent by the camp counselor, every bunk is raided until all the candy is gone, and Vera’s popularity with the older girls plummets. Adding to Vera’s stress and dismay is the fact that her younger brother seems to be enjoying camp just fine and isn’t anxious to leave as soon as possible like she is.

The turning point for Vera is her camp counselor encouraging her to find friends that don’t ask for something in return for “friendship.” Soon Vera finds out that a young camper with a missing guinea pig is an interesting and fun person to hang out with. At the end of camp both Vera and her younger brother come to terms with some of the pros and cons of summer camp on the drive home and, in a tender moment of sibling connection, find out that they have both struggled.

Check out Be Prepared and feast your eyes on the amazing artistry and storytelling skills of Vera Brosgol, an author your kids are sure to want more of.