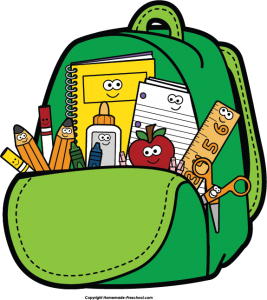 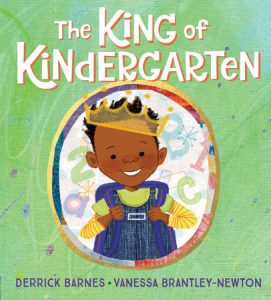 The King of Kindergarten written by Newberry honoree Derrick Barnes and illustrated by Vanessa Brantley-Newton, transforms the average day at kindergarten into an extraordinary, royal adventure.

It’s fun to read Barnes’ regal language. As Mom says, “today” her little boy is going to be the “King” and, with this encouragement, he prepares to venture out confidently. Brushing his “Royal Chiclets,” he dresses himself and “wolf[s] down a tower of pancakes.” I love the emphasis here on growth, maturity, and independence. Being “deliver[ed] … to a grand fortress” (a.k.a. school), he joins the “round table” where he cheerfully exchanges greetings with his classmates. The royal theme continues during circle time, recess, lunchtime, and beyond, each opportunity allowing him to exercise his noble code of honor by braving playground politics, sharing his royal bounty (in the form of an extra cup of chocolate pudding), and showing kindness to his friends. Vibrant colors invite us readers to participate in the little boy’s “Kindergarten Kingdom;” flowing shapes excite us with anticipation of what’s next on his adventure.

A great way to introduce the school day to budding kindergartners, The King of Kindergarten shows us how a little change of perspective can rewrite a potentially scary event into a magical tale. 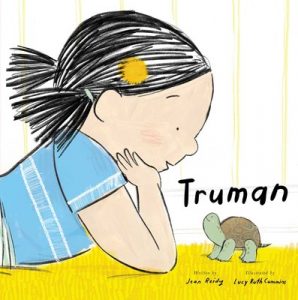 Written by Jean Reidy and illustrated by Lucy Ruth Cummins, Truman is a heartwarming story of the loving relationship between a pet and his owner. But it can also be read as a tale about the challenges a younger sibling faces as his older sister starts school.

There is no doubt readers of all ages will fall in love with Truman. How could you not? He’s “the size of a donut—a small donut—and every bit as sweet.” In simple yet powerful ways, Reidy and Cummins express the affection Truman and Sarah share. Sarah isn’t merely Truman’s owner; she’s “his Sarah” (my emphasis)  who shares the same “peaceful and pensive” personality as her adorable tortoise. Humble shapes and bursts of yellow throughout paint a happy home with decor that brings back memories of my own childhood, notably, the Felix the Cat look-a-like clock on the wall.

This particular day, though, is “truly unsettling” because Sarah is acting different. She eats a “big banana” at breakfast, “clip[s] on a blue bow in her hair,” “strap[s] on a backpack SOOOOOO big thirty-two tortoises [can] ride along in it,” and leaves extra food for Truman. Most shockingly, she boards the number 11 bus, that mysterious bus he can see from his window riding in the “honking,” “growling” city below. Truman spends the day in worrisome wonder as to where Sarah could possibly be and why it’s taking her so long to return.

Through Reidy’s funny tone and Cummins’ artistic perspective, Truman’s journey out of the safety of his tank, and his determination to find his beloved owner is as endearing as it is humorous. Of all the challenges Truman faces, my favorite is his crossing of the living room rug—“That glorious … ENDLESS rug” made all the more imposing by the mean looking toys along his path we see through Truman’s eyes. When he hears the number 11 bus, he’s ready to cross the threshold, but Sarah is back in time to reunite with her pet and congratulate him on his bravery. 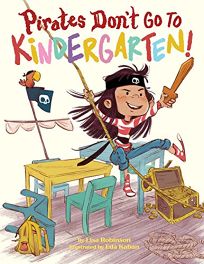 Can an honorable pirate be loyal to more than one captain? This is the question posed in Pirates Don’t Go to Kindergarten! written by Lisa Robinson and illustrated by Eda Kaban.

Equipped with the pirate basics (treasure map, spyglass, and cutlass), Emma storms into school, this first day of kindergarten, determined to set sail once again in last year’s ship commanded by “the roughest, toughest, awesomest preschool pirate cap’n ever”—Cap’n Chu. Yet, it’s a new year and, as Ms. Chu gently reminds Emma, Cap’n Chu has “‘a new band of pirates” to lead. Despite attempts by Cap’ns Chu and Hayes (Emma’s new teacher) to interest Emma in her outer-space-themed kindergarten classroom, Emma sails back to Cap’n Chu’s ship, fiercely allegiant to her pirate roots.

When Ms. Hayes’ class pet needs feeding, Emma shows interest and discovers all the fun activities in the kindergarten class:  a nature center, an art studio, a reading nook, and science station. What’s the one thing missing? “NO CAP’N CHU!” Back in Ms. Chu’s classroom, everything blows out into a full mutiny. This is where the book provides a great opportunity for caregivers to talk about just how confusing and conflicting emotions can be. At the heart of Emma’s protest is feelings of fear and loss at having to accept this major childhood transition and perhaps, even, feelings of guilt as devotion to one person may feel like betraying another. With heartwarming affirmation from Ms. Chu, Emma is ready to “‘open the shuttle hatch’” of her new classroom, bringing her own pirate spin to the kindergarten space station.

A great picture book for talking about transitions, Pirates Don’t Go To Kindergarten! will draw in seafarers and landlubbers alike.

…and Annie Silvestro’s BUTTERFLIES ON THE FIRST DAY OF SCHOOL 😀 http://www.anniesilvestro.com/books#/new-gallery

Absolutely! THANKS TONS for adding and so sorry we missed it. Could swear I’d requested this one and The Pigeon HAS to Go to School!