A THANKSGIVING BOOKS ROUNDUP
Here’s a selection of our 2017 faves
For little ones to gobble up! 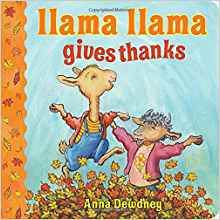 In just under 60 words on 14 sturdy pages, Llama Llama Gives Thanks, based on the characters created by Anna Dewdney, perfectly and joyfully conveys what the holiday is all about — celebrating together with friends and family, trying new foods and giving thanks not just on Thanksgiving but throughout the year. A message worth remembering and easy to understand when shared by Dewdney’s beloved characters. 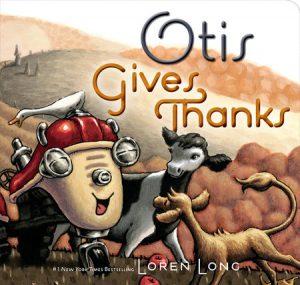 Otis Gives Thanks, a 30 page board book, is certain to appeal to old Otis fans and bring new ones on board. Long’s popular tractor is grateful for so many things on the farm where he lives and works. Whether he’s hopping over hay or settling down to sleep, Otis is always thankful for playful moments, hard work and friends. This beautiful book radiates warmth with its stunning artwork of muted hues and feeling of a bygone era. Every page is a tribute to the heartland where our food is grown and a caring community including farmers love the land and the country, just like Otis does. www.otisthetractor.com

Where is Baby’s Turkey? 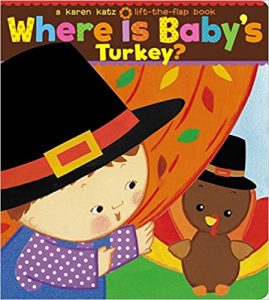 This sweet interactive board book invites young readers to help Baby find his cuddly turkey. By lifting assorted flaps and searching behind seasonal flowers, a gate, a basket, the fridge, in the kitchen and behind the door, Baby is introduced to a colorful variety of Thanksgiving items until his plush toy turkey is found. With just the right amount of flaps to entertain and engage, Where is Baby’s Turkey makes an ideal gift this holiday season for those just learning what Thanksgiving is all about. 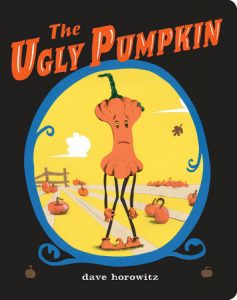 Written and illustrated by Dave Horowitz
(Nancy Paulsen Books; $7.99, Ages 2-5)
Move over duckling, here comes The Ugly Pumpkin! Horowitz’s hit, The Ugly Pumpkin is now in board book format with its humorous illustrations and rhyming first person text. Ideal for both Halloween and Thanksgiving, this tale is about a distinctly shaped pumpkin who is frequently mocked, never gets picked and is left to wander on his own to find someplace where he’ll be accepted and belong. The mood picks up when he discovers “a garden that was overrun with squash. I noticed something very odd and then thought, O my gosh …” This little pumpkin was a happy little pumpkin when he learns he’s really a squash! And for him, that was definitely something to be thankful for! Horowtiz’s whimsical illustrations add another layer of zaniness to a funny story that easily engages kids since it’s impossible not to empathize with the long, thin orange narrator.

Rettie and the Ragamuffin Parade 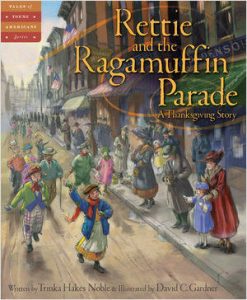 If you’ve ever visited New York’s Tenement Museum, this historical fiction picture book will surely resonate with you. But even if you haven’t, from the very first page you’ll be transported back to the Lower East Side in November of 1918. Americans were overseas fighting and at home an influenza pandemic swept across the country making thousands of children, rich and poor, orphans. The disease did not discriminate. In the two-room tenement of nine year old Loretta Stanowski, or “Rettie” as she was known, looked after her consumptive mother and three younger siblings. Her father was a soldier somewhere abroad. So, to earn money to support the family during her mother’s illness, Rettie cleaned rags. She also longed for the upcoming Ragamuffin Parade which many now say was the precursor to Macy’s Thanksgiving Day Parade. But would the city call off the event since so many people were ill and public gatherings had been stopped to prevent the influenza from spreading? During the Ragamuffin Parade, wealthy people would line the streets and give pennies to the raggedy clothed children who asked, “Have ya anything for Thanksgiving?” There would also be a scramble at busy street corners were pennies were tossed in the air and kids would scramble to collect as many as possible, hence the name. The parade would provide a much needed opportunity to bring in extra money. Putting food in the mouths of her family was Rettie’s top priority as was staying healthy so when her tenement building’s manager came down with the flu and was quarantined, an opportunity for Rettie to earn more money presented itself. This moving story is a well-written and engaging resource for anyone interested in daily life in early 20th century New York, although these scenes likely played out in cities across America. As the war came to end on November 11, 1918, President Woodrow Wilson declared November 28 a day of Thanksgiving. To this day we gather together as Americans to share a meal and reflect on our many reasons to be thankful. Between Noble’s well-researched story and Gardner’s evocative illustrations, Rettie and the Ragamuffin Parade is a treat. The spirited young Rettie is an inspiring main character and her devotion to her family shines through on every page. An author’s note at the end provides more details for young readers as does an archival photo circa 1910 of the ragamuffins. Despite having grown up in New York, I’d never heard of this parade and appreciate Noble’s successful efforts at capturing the time, place and people struggling daily on the Lower East Side.