HAVE YOU SEEN MY BLANKIE?
Written by Lucy Rowland
Illustrated by Paula Metcalf
(Nosy Crow; $16.99, Ages 2-5) 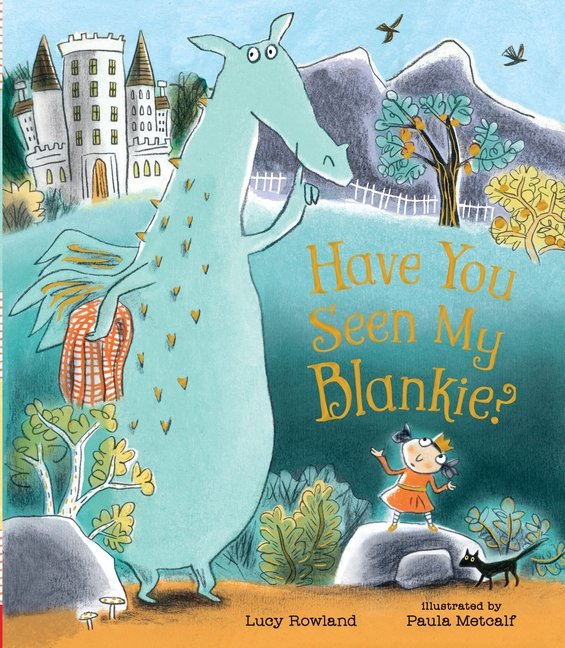 Princess Alice always takes her soft, warm and snuggly blankie to bed until one day it goes missing in Have You Seen My Blankie? The picture book, told in rhyme, is written by speech and language therapist Lucy Rowland, with colorful full-page illustrations by Paula Metcalf.

The book opens to Princess Alice’s bedroom with purple walls, a large canopy bed and more toys than most kids would know what to do with. But the toys aren’t as important to Alice as her white and orange blankie she is shown cuddling on her bed. “This blankie was so cuddly! So soft and warm and snuggly!” 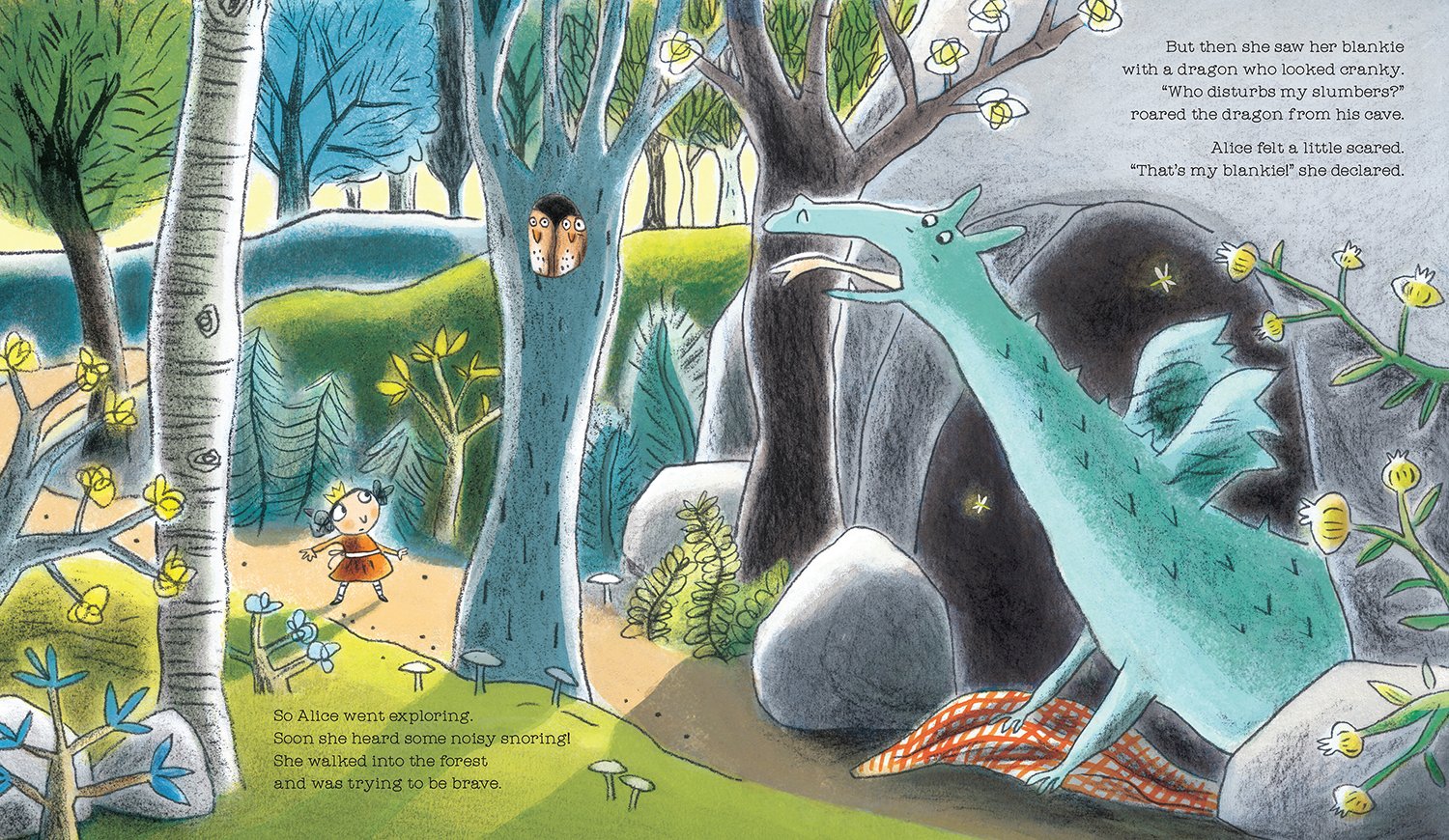 “But one day … it went missing!” Metcalf shows Princess Alice searching under her bed, the piano, the couch pillows, and even inside the toilet (she stands on a stool for this drawing!) Each illustration shows her princess crown on top of her head which I found adorable. Princess Alice hurries to the palace door and asks her brother, who is upside down swinging on a tree (but his crown doesn’t slip), “Do you have my blankie, Jack?” Jack explains that after he used her beloved blankie as a curtain, a giant took it from him and wouldn’t give it back! Rowland offers some laugh out loud brother sister dialogue kids will love.

Princess Alice’s search begins as she tracks down Giant Jim who says, “Yes, I had your blankie but I used it as a hankie.” Each illustration depicts beautiful detail of the scene. We know Giant Jim is a chef by the apron he is wearing, and the rolling pin in his hand. His outdoor table is set for tea, and his smile shows the reader he is a nice giant. 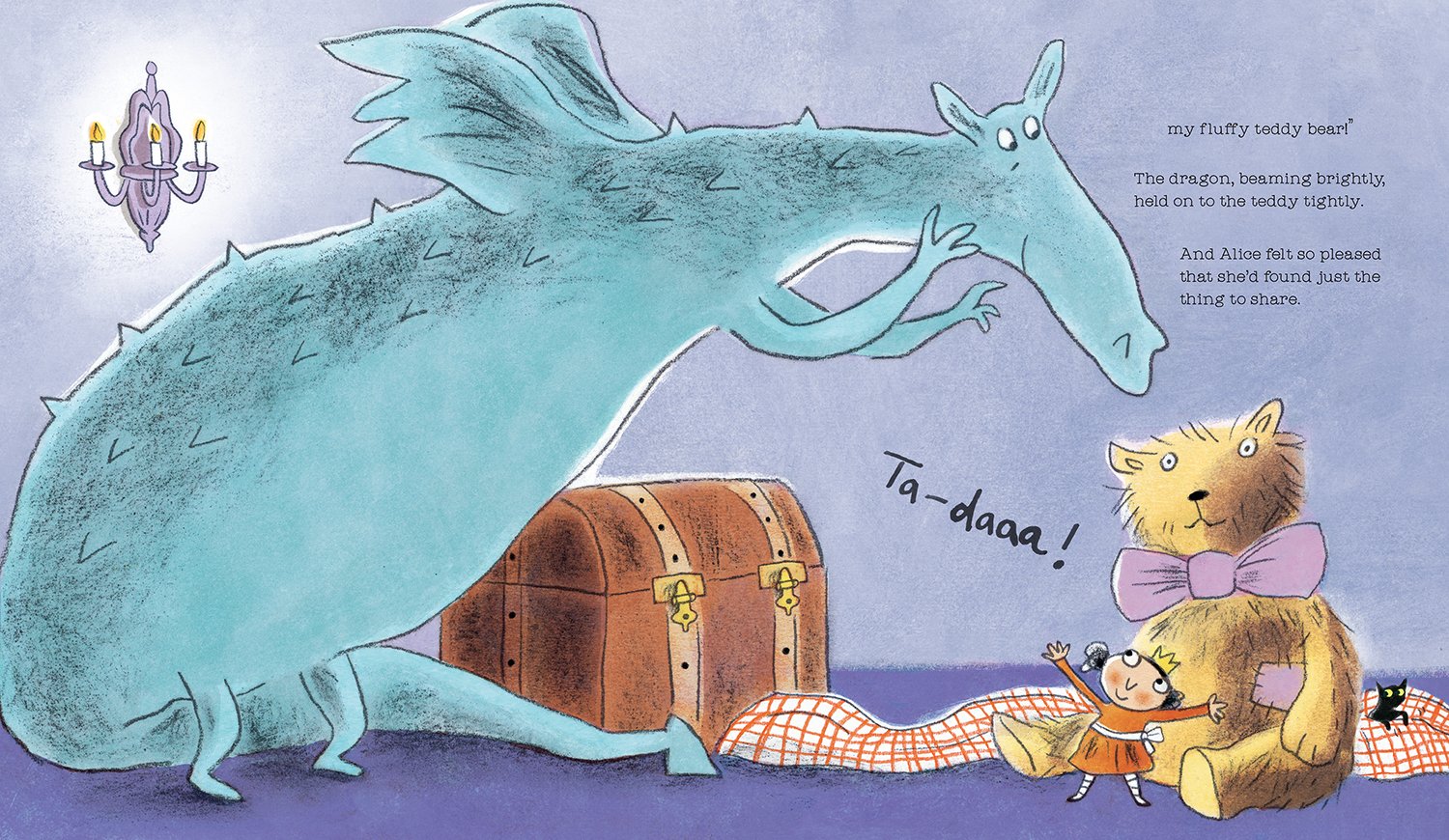 Page by page Princess Alice continues her search for her beloved blankie. “But then she saw her blankie with a dragon who looked cranky.” Alice felt a little scared. “That’s my blankie she declared.”

Alice has an idea and works with the dragon to find him a replacement, so he will return her blankie. The detailed drawings and fun rhymes, take the listener into an imaginary world of magical kingdoms, giants and snuggly teddy bears. Princess Alice shows love and compassion for the dragon who took her blankie. Knowing how important it is to sleep with something soft and warm, she wipes away his tears. strokes his head, and promises she will find something that’s just right.

This sweet story teaches children about kindness and compassion, even for someone who may have caused them harm. They’ll be happy when two unlikely characters become friends: ” … inside a royal palace lives a young princess named Alice. And now there is a dragon who will often come to stay!” Have You Seen My Blankie? is a comforting bedtime story for any child who, while still needing a security blanket or stuffed animal to cuddle, will feel reassured to learn that even a big dragon needs a snuggle at bedtime. 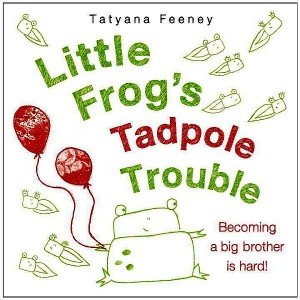 Tatyana Feeney wows us again with her simple brand of illustrating and storytelling in Little Frog’s Tadpole Trouble (Alfred A. Knopf Books for Young Readers, $16.99, Ages 1-3).

The universal tale of a new baby (or in this case, nine tadpoles) taking all of mommy and daddy’s attention from big brother (or in this instance, Little Frog) will delight older siblings, whether boys or girls.

We all know newborns don’t do much, but require oodles of attention from their parents. So it is when Little Frog suddenly finds himself the big brother to nine tadpoles. They can’t build towers, they can’t play the drums, and they can’t even jump! All they can do is take mommy and daddy’s time away from Little Frog, who is resentful of missing story time and goodnight kisses from his parents.

Then, one day the tadpoles grow into little frogs themselves becoming perfect playmates for their big brother. Little Frog decides having siblings isn’t so bad after all, and that it makes his family better than ever. Little Frog becomes the best big brother and one youngsters can relate to.

A companion book for Feeney’s other works: Small Bunny’s Blue Blanket (see below) and Little Owl’s Orange Scarf, Little Frog’s Tadpole Trouble is the perfect book when a new baby is brought into the family. 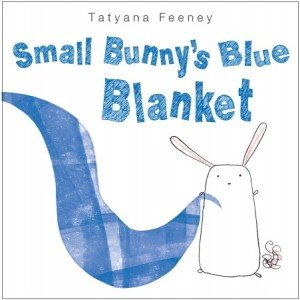 Here’s a book for all of you parents out there with little ones who have an attachment to a blanket, stuffed animal, or other inanimate object. You are not alone! Who hasn’t tried to sneak a sour smelling “doggie” into the washer? How many times have you heard of the dad cajoling the night janitor to let him into the preschool to retrieve the “bunny” left in a cubby, just so his daughter could go to sleep, or seen the dirty, frayed, and much loved blanket dragging behind a toddler in the grocery store? Tatyana Feeney, author of Little Owl’s Orange Scarf and Little Frog’s Tadpole Trouble, has enchanted us again with Small Bunny’s Blue Blanket and captured one of the cutest and at the same time most frustrating, loves of wee ones: the security blanket.

Small Bunny’s Blue Blanket (Alfred A. Knopf Books for Young Readers, $6.99, ages 1-3 ) is released this time as a board book, just perfect for tiny hands to hold. With simple text and illustrations in watercolor and ink, it will be enjoyable for the youngest of “readers.”