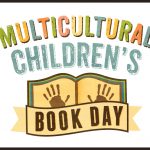 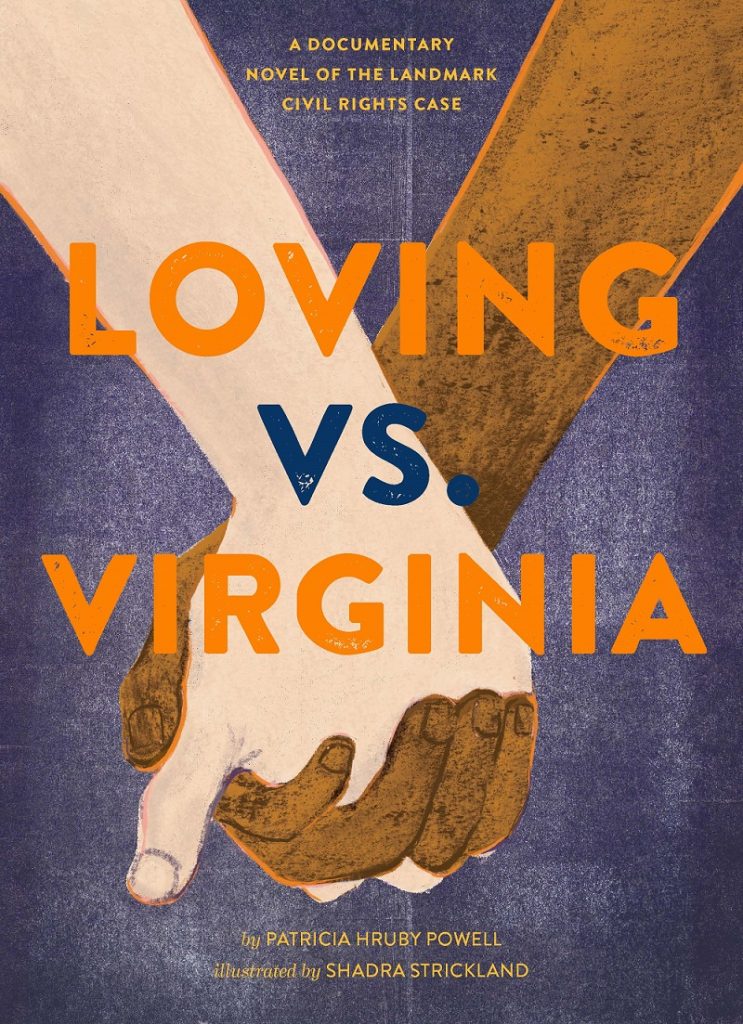 REVIEW: When I read Patricia Hruby Powell’s Loving vs. Virginia I felt like a fly on the wall or a Jeter family cousin, as the action of this powerful story unfolded around me. Despite knowing how things turn out in the end, I found every aspect of this teen docu-novel incredibly riveting and eye-opening. Through meticulous research and interviews, Powell has successfully managed to transport readers back in time to the Jim Crow south of Caroline County, Virginia. Plunked down into the small neighborly community of Central Point, we’re quickly swept up into the lives of sixth grader Mildred Jeter, and her close knit family. The year, 1955.

As the romance between family friend Richard Loving and Mildred Jeter developed and grew, so did their problems. Strict segregation laws banning interracial marriage were in effect in over 20 states making any romantic relationship between a black woman and a white man a crime, and vice versa. Virginia, the state that Mildred and Richard called home, made no secret of its distaste for interracial marriage and did whatever it could to thwart these relationships. Mildred often noted that had their genders been reversed making Mildred a white woman and Richard a black man, he’d have surely been hung.

So while things were already difficult for these two, matters were made worse by the local law enforcement. A nasty man named Sheriff Brooks was determined to keep the lovers apart or make them pay. When Mildred and Richard eventually got married in D.C. where it was legal to do so, they returned home to Central Point intending to stay under the radar. But secrets were hard to keep in small towns and it wasn’t long before Sheriff Brooks invaded their home as the legally married couple slept together. The marriage was not considered legal in Virginia and the Lovings were guilty of committing a crime. Mildred and Richard were arrested! Having not seen the film or read anything about the Lovings, I was shocked by this dead of night intrusion.

This would only be the first of several arrests that eventually led Mildred and Richard to young lawyers with the National Civil Liberties Union. The Loving’s rights as Americans, according to their plucky attorneys, were being denied. It took several years and a lot of personal sacrifice for the couple, but they worked through every issue, and their compelling case was ultimately heard by the U.S. Supreme Court. Of course as we all know, they won in a unanimous decision under Chief Justice Earl Warren, but the fear of losing was palpable. It was no longer illegal to marry someone of another race. And at last, the Mildred and Richard could raise their children in their home state of Virginia without fear of breaking the law. Perseverance, fearlessness, and commitment helped this couple make history. The year, 1967. And now in 2017 we can proudly mark the 50th anniversary of this important case and the Lovings that made it happen.

Powell’s writing is at once simple yet sophisticated. The ample white space of each unillustrated page invites readers in slowly and calmly as the tension of the story builds. Told in blank verse, Powell’s narratives alternate between the distinct voices of Mildred Jeter and Richard Loving, bringing enlightening perspectives to teen readers. The text is complemented by illustrator Shadra Strickland’s evocative artwork done in visual journalism style “characterized by a loose, impromptu drawing style” containing overlapping lines and “an informal feeling of sketches in the final composition.” Strickland’s illustrations made it easy to picture the setting, the characters, the time period and the events. I cannot imagine this story with any other type of art. Its minimal and muted color palette and its interspersing of historical photos in black and white worked wonderfully to convey the mood of this era. Helpful information can be garnered from the extensive resources included in the back matter of this book such as a time line, a bibliography, quote sources and moving messages from the artist and author. With its still timely message of civil rights, equality and racial tolerance, Loving vs. Virginia should be required reading for every high school student. I will be recommending it to everyone I know with a teen at home. 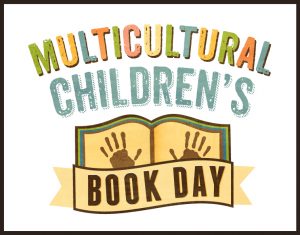 Multicultural Children’s Book Day 2017 (1/27/17) is its fourth year and was founded by Valarie Budayr from Jump Into A Book and Mia Wenjen from PragmaticMom. Our mission is to raise awareness on the ongoing need to include kid’s books that celebrate diversity in home and school bookshelves while also working diligently to get more of these types of books into the hands of young readers, parents and educators. Despite census data that shows 37% of the US population consists of people of color, only 10% of children’s books published have diversity content. Using the Multicultural Children’s Book Day holiday, the MCBD Team are on a mission to change all of that.

We’d like to also give a shout-out to MCBD’s impressive CoHost Team who not only hosts the book review link-up on celebration day, but who also work tirelessly to spread the word of this event. View our CoHosts here.

The MCBD ebook is LIVE on Amazon here!!
This ebook will be FREE to everyone January 26th-January 30th. For people who have KindleUnlimited it’s free for them all of the time.

Hashtag: Don’t forget to connect with us on social media and be sure and look for/use their official hashtag #ReadYourWorld.

From acclaimed author Patricia Hruby Powell comes the story of a landmark civil rights case, told in spare and gorgeous verse. In 1955, in Caroline County, Virginia, amidst segregation and prejudice, injustice and cruelty, two teenagers fell in love. Their life together broke the law, but their determination would change it. Richard and Mildred Loving were at the heart of a Supreme Court case that legalized marriage between races, and a story of the devoted couple who faced discrimination, fought it, and won.

Shadra Strickland is an illustrator whose work has won an Ezra Jack Keats Award, a Coretta Scott King/John Steptoe Award for New Talent, and an NAACP Image Award. She lives in Maryland.

GIVEAWAY:
Details of our giveaway courtesy of Chronicle Books are below. Plus, if you follow us on Facebook and let us know that you did by telling us in the comments of this blog post, we’ll give you an extra entry. An additional comment on our Facebook page post for this book review gets you yet another entry. Also, if you enjoyed this review, please subscribe to our blog. Thanks and good luck!