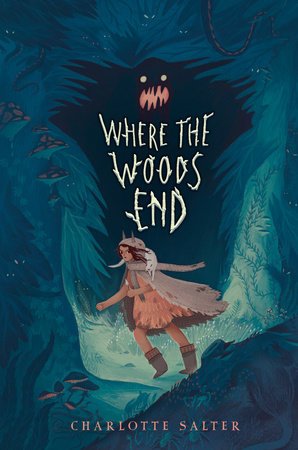 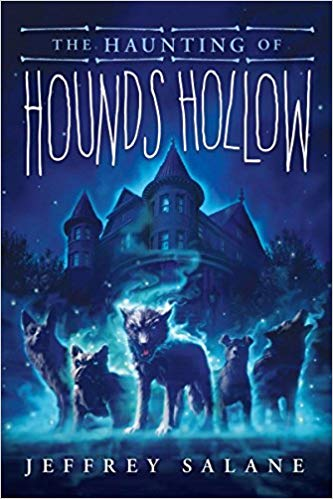 The middle grade novel, The Haunting of Hounds Hollow by Jeffrey Salane, is a recommended read for chilly, dark winter evenings. When Lucas Trainer’s family inherits a house from an almost-forgotten relative they move from the comforting familiarity of the big city to Hounds Hollow. For Lucas, making new friends means explaining his undiagnosed disease (his parents call it the Dark Cloud). Adjusting to being in the middle of nowhere is complicated by their crazy new mansion—akin to the Winchester Mystery House with rooms that lead to nowhere and a construction crew that doesn’t stop building.

The town’s history of people disappearing coupled with what may be a roaming pack of malevolent ghost dogs is enough to scare anyone away, but Lucas and his two new friends, Bess and Lens, decide they must uncover what’s going on before it’s too late. Lucas has a mysterious key that he hopes will unlock secrets from the past that continue to have hold of the house and its environs.

This book is suited for kids who like plots that delve into horror. The Haunting of Hounds Hollow takes some dark turns, particularly at the end. If you think your kid will grow into a fan of stories like Stephen King’s Pet Sematary then this tale will not disappoint. 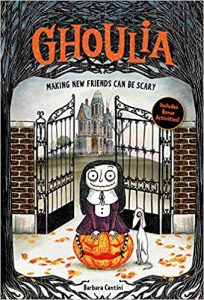 In her debut chapter book as author-illustrator, Cantini brings young readers Ghoulia, a friendly, warm and purple-loving zombie girl (can a zombie be warm, just asking?) who really has only one wish, to have friends. Stuck inside the grounds of Crumbling Manor, Ghoulia has been forbidden to leave the premises out of fear she and her Auntie Departed, her closest relative, will be made to leave the village should they be found out. In this first book of the series, and at just 64 illustration-filled pages, Ghoulia is a fast and fun read for anyone curious about zombie kids. Ghoulia’s cast of characters includes her Auntie Departed, Shadow the cat, Uncle Misfortune who happens to be a head and ideal candy bucket for Halloween, Tragedy the Albino greyhound and Grandad Coffin, a chess-playing distraction for a zombie granddaughter’s escape on Halloween. Ghoulia pulls off this daring feat (and that could be a pun since her body parts can come off whenever she wants) on Halloween when her brilliant idea to masquerade as herself in order to meet the local children is a huge success. But alas, what will happen when the village trick-or-treaters learn the truth and it’s revealed that Ghoulia’s not dressed up in a zombie costume but actually is one? A secret Monster Society is formed and everyone lives (well that’s not totally true of course) happily ever after. Cantini captures the atmosphere of Ghoulia’s off-beat world with page after wonderful page of whimsical illustrations and a sweet storyline. Book 2, Ghoulia And The Mysterious Visitor is up next in this winning new series so fans won’t have to wait long to find out what’s in store for the charming zombie girl. Several entertaining pages of bonus activities are included in the back matter.   • Review by Ronna Mandel 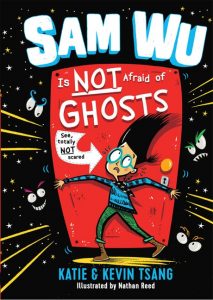 Chapter book, Sam Wu is NOT Afraid of Ghosts is a good match for reluctant readers because of its simple text, frequent illustrations, and funny asides in the margins or footnotes. As the title implies, there will be a lot of ironic humor; Sam Wu must face his fear of ghosts and reestablish himself in the eyes of his peers after a truly embarrassing incident. Luckily he’s learned a lot from his favorite TV program, “Space Blasters.” Now it seems there’s a ghost in Sam’s house, so Sam and his friends must prove they are brave ghost hunters.

Kids can sympathize with how it feels to not fit in. Sam introduces his friends to his favorite meal (roast duck and turnip cake) and urges them to take just one bite—even though the turnip cake does smell a lot like feet. Doing so, he successfully bridges their cultures using delicious food. Regaining some dignity with his classmates is harder, but Sam Wu demonstrates he’s no “Wu-ser” (as Ralph, the class bully, calls him).

In the closing Q&A, authors Katie and Kevin Tsang explain how they’ve woven some of their own childhoods into the story, showing they are “definitely NOT afraid of answering some author questions.”

Nathan Reed livens up the story with hilarious images of the characters including the evil cat Butterbutt, and Fang, the toughest snake ever. There is visual interest on every page to keep kids engaged beyond the text of the story.

Sam Wu is NOT Afraid of Ghosts works well as a Halloween book for kids who prefer not-very-scary ghost stories with plenty of laughs.
• Review by Christine Van Zandt 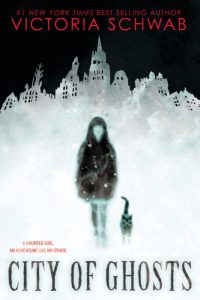 Looking for a spooky Halloween read? Check out Victoria Schwab’s middle-grade novel, City of Ghosts. The story opens when eleven-year-old Cassidy’s birthday gift sends her over the edge (literally) and she drowns (sort of—a boy-ghost named Jacob retrieves her from death). Soon after, Cass is drawn toward something she calls The Veil and discovers that she can cross over into the place where ghosts dwell.

Jacob and Cass travel to Scotland with Cass’s parents whose book The Inspecters (inspectors of specters) is being made into a television series. Cass meets another girl with the same sort of gift in Edinburgh, the city of ghosts. There, mysterious locales harbor dangerous inhabitants; Cass must quickly learn how to survive.

The reveal-and-conceal relationship between the lead characters in City of Ghosts is fascinating. There’s a lot to learn about the other side when adventures through The Veil become more complex. This book explores historical haunts and interesting folklore as the alluring story unfolds in ethereal delight.

Victoria Schwab is the #1 New York Times best-selling author of more than a dozen novels for young adults and adults, including the Shades of Magic series, Vicious, Vengeful, This Savage Song, and Our Dark Duet.  • Review by Christine Van Zandt Writer, editor, and owner of Write for Success www.Write-for-Success.com @WFSediting,Christine@Write-for-Success.com