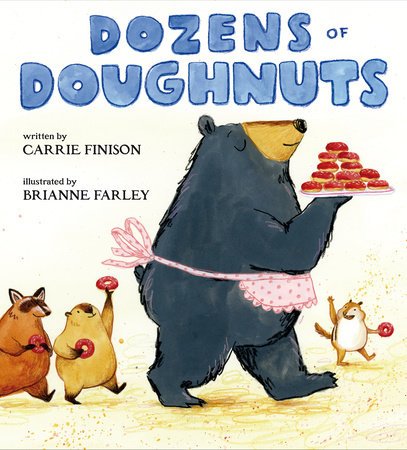 Sharing batch after batch of homemade doughnuts is what thoughtful friends do. But what’s LouAnn the bear to do just before hibernation when her stomach growls from hunger and no doughnuts remain? Such is the predicament presented in Carrie Finison’s debut counting/math practice picture book DOZENS OF DOUGHNUTS with illustrations by Brianne Farley.

Farley’s fun art introduces the reader to a variety of delicious-looking doughnuts, each numbered to 24. Pink Sprinkles, Swirly, Jelly-Filled, and Nibbled (with a bite taken from this purple glazed doughnut) set the stage for the story to come.

A big brown bear is seen through her kitchen window busy stirring the big bowl of batter. She’ll eat some sweet treats, then, warm and well-fed, she’ll sleep away winter, tucked tight in her bed. The orange and yellow leaves show off the colors of fall as we see a beaver nearing the front door.

Although one dozen doughnuts are hot from the pan and ready for LouAnn the bear to devour, an unexpected DING-DONG! gets the story going in a whole new direction. Do you have enough for a neighbor to share? Woodrow the beaver asks. The reader counts the 12 red doughnuts on the large plate as LouAnn places 6 doughnuts on her plate and 6 doughnuts on Woodrow’s plate. Now the real counting begins.

With DING-DONG! after DING-DONG!, Finison’s rhymes welcome friend after friend at the bear’s front door. You’re welcome. Dig in! I’ll make more, says LouAnn. She measures and mixes as fast as she can. Clyde the Raccoon, Woodrow, and LouAnn are seen with four doughnuts on each plate, but note the smile leaving our kind-hearted bear’s face. Page after page, we see more friends arriving until there are no doughnuts remaining for our generous and exasperated hostess LouAnn.

She’s ready to sleep through the snow, ice, and sleet. But winter is near, and there’s nothing to eat! As the page turns, LouAnn lets loose a dramatic ROAR! and readers see the group of friends scram. Soon though they’re back, having realized they need to make things right for their pal. They return the kindness and become the bakers. (Another great lesson for young readers).

This sweet (after all it is about doughnuts) rhyming book is such an entertaining and clever way to teach kids how to count to 12 and also divide 12 by 2, 4, or 6. Conveying the importance of sharing is the icing on top. I felt empathy for LouAnn, who almost began hibernation hungry until her friends came through for her. Finison’s words show young readers why being considerate matters while cleverly sneaking in how to count and divide. Plus we see how many flavors of yummy doughnuts can be made!
NOTE: Read this book after a meal otherwise be sure to have donuts on hand!