AN INTERVIEW WITH ALEXIS O’NEILL 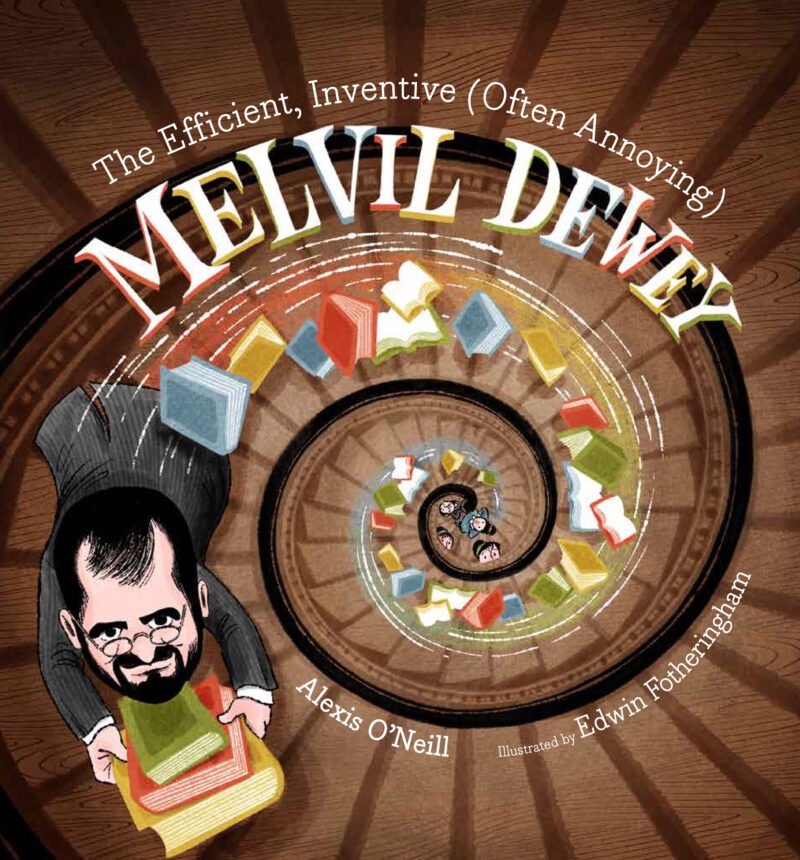 I’m thrilled to have Alexis back on GRWR to talk about her latest picture book biography and the quirky visionary she chose to write about.

Melvil Dewey’s love of organization and words drove him to develop and implement his Dewey Decimal system, leaving a significant and lasting impact in libraries across the country.

When Melvil Dewey realized every library organized their books differently, he wondered if he could invent a system all libraries could use to organize them efficiently. A rat-a-tat speaker, Melvil was a persistent (and noisy) advocate for free public libraries. And while he made enemies along the way as he pushed for changes–like his battle to establish the first library school with women as students, through it all he was EFFICIENT, INVENTIVE, and often ANNOYING as he made big changes in the world of public libraries–changes still found in the libraries of today!

Buy the book from your local independent bookseller.

Good Reads With Ronna: It’s like the history of Melvil Dewey has been hiding in plain sight all these years. I never gave much thought to his decimal system of book organization for libraries, and definitely never figured it out. What sparked your curiosity into the man and his contributions?

Alexis O’Neill: I hadn’t given him much thought either, Ronna, until a librarian friend sent me a funny video she used to help teach kids the Dewey Decimal System. That made me realize I didn’t know a thing about the inventor of this seemingly ubiquitous system.

GRWR: Apart from what Melvil Dewey is most famous for, what other ideas did you discover during your research phase that he championed which have impacted our lives?

AON: Dewey really championed education for all. He was concerned about rural Americans as well as the waves of new immigrants having easier access to information. He also was a proponent of the Simplified Spelling movement, a precursor to today’s texting – getting rid of vowels and extra letters in words that hindered or were unnecessary to pronunciation – like “tho” for “though.” He chopped “Melville” down to “Melvil” but when there was an outcry, was convinced not to change “Dewey” to “Dui.”

GRWR: Let’s talk about Dewey’s dream of a librarian school at Columbia College where he was the chief librarian. Trustees did “not want women on their campus.” So how did he succeed?

AON: He got around them by following the spirit of the law and not the letter of the law. When Columbia College Trustees refused to have women on campus, Dewey bent rules to his needs: he opened his School of Library Economy in a storeroom over the chapel across the street. The entering class had seventeen women and three men.

GRWR: Dewey is referred to in the jacket flap as “EFFICIENT, INVENTIVE, and often annoying.“ Can you describe some of his quirky character traits?

AON: Even if Dewey had no fatal flaws (and he indeed had them), I still don’t think I’d be able to stand being in the same room with him for very long. He talked incessantly and rapidly. While the average American speaks at about 100-130 words per minute, one of Dewey’s students clocked him at a rate of 180 words per minute. When he tried to convince others about one of his ideas, he was like a dog on a bone. From a very young age and throughout his life, he obsessively kept lists of things such as his height, weight, assets, and more. And he fixated on the number 10, thus decimals. He wrote, “I am so loyal to decimals as our great labor saver that I even like to sleep decimally” (in other words, 10 hours a night.)

GRWR: Melvil approached every endeavor and encounter in his life at 100 mph. The train visuals speeding through the pages of your story perfectly convey this energy. Do you think he moved at this pace because he had so much to accomplish in his lifetime that was predicted to be short after he inhaled smoke during a fire in his youth?

AON: Dewey grew up in a deeply religious, restrictive household. He was always concerned with wastefulness and a desire “to leave the world a better place than when I found it.”  But when he was recuperating from a fire at his school as a teen, this desire became an obsession as did his preoccupation with efficiency.

GRWR: There are a lot of words printed in bold throughout the book. You also ask young readers several questions throughout it as well. Can you explain why?

AON: I wanted readers to come along with the book’s narrator on a breathless ride in “real-time” as Dewey’s driving energy rushes through the years. I used present tense, direct questions, and bolded words to make the narrative voice break the fourth wall and emphasize the surprise the narrator feels while making observations about Dewey.

GRWR: What made Dewey fall out of favor in the public’s eye?

AON: A couple of decades into his career, Dewey was exposed as a racist, anti-Semite, and serial sexual harasser. He had created the Lake Placid Club that specifically excluded people of color, Jews, and other religious groups. And there had been justified complaints for years in the American Library Association, a group he helped found, about Dewey’s serial harassment of women. For his actions, he was censured by the NYS Board of Regents for his discriminatory practices, forced to resign from his positions as State Librarian and director of the library school, and ostracized by the ALA.

GRWR: How do you reconcile Dewey’s love of books and reading driving his initial motivation to help immigrants and those who cannot afford books with his bigoted views of Jews and others?

AON: I really can’t reconcile or explain this.

GRWR: Is it hard to write about someone whose personal views you may not necessarily like or agree with?

AON: Dewey’s goal was to make the world a better place. So the question is, did his classification system make the world a better place? I believe it did. It expanded educational opportunities for the general public by making access to information more efficient. There are countless examples of artists, scientists, and others whose negative personal behaviors are hard to reconcile with their contributions, but their contributions have made significant, positive differences in so many lives.

GRWR: You used to write fiction and of late have switched to nonfiction kidlit, primarily biographies. What about writing fact-based stories appeals to you? And what do you think kids like about them?

AON: I still write fiction, but I love American history! Early in my writing career, I wrote many articles for Cobblestone Magazine, and doing the research was a kick. Like me, I think kids are excited to know when something is real. Some facts–especially in history or science–just take my breath away.

GRWR: Where do you turn to for story inspiration?

AON: Footnotes in books, articles, videos – lots of things spark ideas for stories. I never know where the next spark comes from or if it will flame into a book.

GRWR: If you’re able to divulge this info, what is on your radar for your next picture book?

AON: Right now, I have a couple of fiction picture books circulating, and I’m working on a middle-grade nonfiction project. After so many years of writing “tight,” doing long-form work is challenging. I keep wanting to cut words!

Thanks for this opportunity, Ronna!

GRWR: What a treat it’s been to have you back here to share your insights about Melvil Dewey, Alexis. I will never look at those numbers in the library the same way again!

Alexis O’Neill is the author of several picture books including The Recess Queen, the winner of several children’s choice awards, and The Kite That Bridged Two Nations, a California Young Reader Medal Nominee. Her new picture book biographies are Jacob Riis’s Camera; Bringing Light to Tenement Children and The Efficient, Inventive (Often Annoying) Melvil Dewey. Alexis received the California Reading Association’s award for making significant and outstanding contributions to reading throughout California and is an instructor for the UCLA Extension Writers’ Program.