Under The Freedom Tree – a 2014 Junior Library Guild Selection! 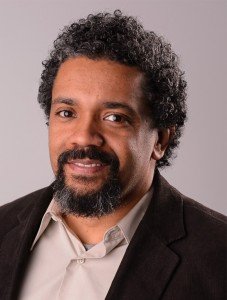 Today Good Reads With Ronna and London Ladd discuss how, as the illustrator of Under The Freedom Tree (Charlesbridge, $16.95, Ages 6-9) by Susan VanHecke, he came up with the illustrations for this picture book which we’re highlighting for African American History Month (also known as Black History Month). If you didn’t see yesterday’s post where we interviewed author Susan VanHecke, please click here to read it.

BLOG TOUR & GIVEAWAY
We’re joining other reviewers this week as part of a special Charlesbridge Publishing blog tour and hope you’ll take the time to visit all the bloggers’ sites. We’re also delighted to be giving away one copy of Under The Freedom Tree, so enter by clicking here for a chance to win. This giveaway ends at midnight PST on February 24, 2014. Please be sure to write Freedom Tree in the subject line and include your address. Like us on Facebook for an extra entry. A winner will be chosen by Random.org and notified via email on February 25th. Good luck!

REVIEW
Under The Freedom Tree shares the story of three captured slaves, Frank, James and Shepard, during the Civil War, who take an enormous risk to escape across dangerous waters in Virginia to reach the Union Army on the other side only to discover they are still not totally free. However, with the help of clever General Butler, a lawyer before the Civil War, the three fugitives are able to remain with the Union side on a technicality. The winds of change were beginning to blow in the right direction. 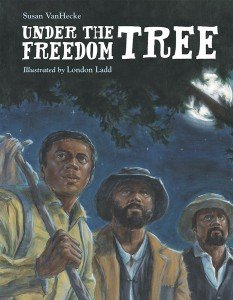 VanHecke delivers a powerful tale told poetically in free verse and based on actual accounts of the creation of America’s first “contraband camps.”  After word of Frank, James and Shepard’s successful escape, others followed suit. First hundreds then thousands.

Better forward than back.

Former slaves built a community in what was known as Slabtown, or the Grand Contraband Camp. By day they worked for the Union, but they were freer than they’d ever been, some living in a home of their own for the very first time.  Silent witness to this all was the majestic old oak tree, the Freedom Tree. Illustrator Ladd conveys so much spirit and emotion in every spread, whether by depicting children being taught under the shade of the oak or the joyful gathering of the community to hear the reading of Lincoln’s Emancipation Proclamation. “Lives forever changed under the Freedom Tree.”

Be sure to sit down with your kids and read this fantastic picture book that helps shed light on a little-known yet inspiring event of the Civil War. Also included are a bibliography and author’s note at the end providing more historical information that helps place many of the events in Under The Freedom Tree in context.

Good Reads With Ronna: When a publisher approaches you with a book to illustrate, do you see the completed manuscript or is it still rough round the edges? I’m curious because I wonder if your illustrations have ever influenced the direction a book can take?

London Ladd: It depends on the publisher. Most of the time I’ll get a completed script, but there have been a few times I will get something that’s in the last stages of editing. It’s minor wording that doesn’t affect my ideas.

Good Reads With Ronna: What is your illustration process, i.e. do you research the subject matter, then sketch and finally paint the art to be used?

London Ladd: I’ll usually read and reread the manuscript, then I do a few small quick thumbnail sketches. After that I start diving into the research and this is the most fun because I get to learn new things, but sometimes I get so involved I get lost and have to pull myself back into focus. After gathering myself I do more sketches to storyboard all the pages. Then I take A LOT of reference photos. I draw the final sketches and send to the publisher for feedback and after things are approved I paint the final artwork.

GRWR: In terms of medium for Under the Freedom Tree, did you use acrylics and combine them with pastels and colored pencils like your bio describes or did you try something different with this book?

Ladd: I primarily use acrylic paint, but recently for Under the Freedom Tree, I’ve combined colored pencils and pastels. I feel it adds more depth to the art and creates a signature look. When I’m working I get messy so my clothes will get covered in paint. It’s a bad habit I’ve tried to stop but I get so locked in I can’t help it. In the past I’ve tried oils on top of the acrylics but when it got on my skin I had bad reactions and discontinued use. 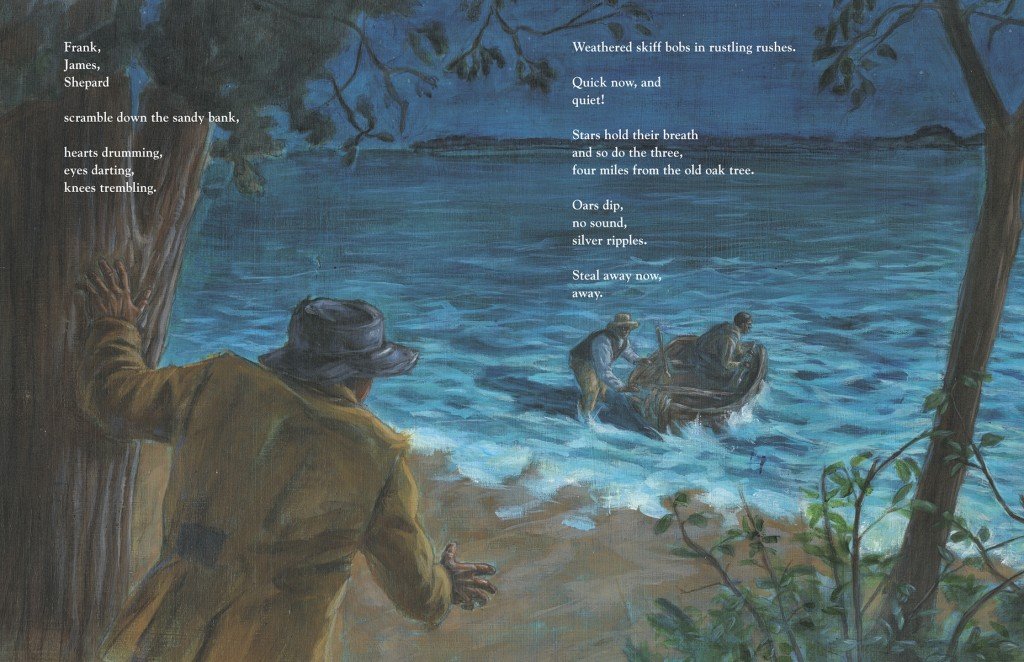 Interior spread from Under The Freedom Tree by Susan VanHecke with illustrations by London Ladd, Copyright © 2014, Charlesbridge Publishing.

GRWR: What is your favorite illustration in Under the Freedom Tree?

Ladd: That’s a difficult answer because I really love each illustration in this book for various reasons. If I had to pick one right now it would be the first page with them running because when I first read the manuscript that page came alive so clearly in my mind’s eye and heart. I could vividly hear the sound of the crickets chirping, the pounding feet of the three men in the tall grass, the hurried sound of their breathing in the night as they sneak off. If you watch the book trailer that’s exactly how I saw it in my head.

GRWR: Which was the most difficult to complete and why?

Ladd: I think the page where the people are rebuilding after the Confederate soldiers torched Hampton. I didn’t know how to approach it. What do I show? How do I convey in my illustration the words effectively? When I traveled to Hampton to do more extensive research and see landmarks like Emancipation Oak, Fort Monroe and Sewel’s Point (the spot where the men escaped from) I stopped in the Hampton History Museum and they had this amazing exhibit from that era. There was a replica of a burnt brick wall with an actual photo of Hampton after the fire in 1862. When I saw that I knew exactly how that page should look. It’s funny because without visiting I would have never created that page.

GRWR: Is it difficult as an illustrator to try to capture a unique moment in time and have your illustration convey a mood or incident?

Ladd: Wow that’s a good question. I guess it depends on the project. For March On I wasn’t born during the march on Washington so wanted to capture the moment. What would it be like if I was there and to be a part something so special? For Oprah I felt a connection to her story. I’m also an only child who had a fierce determination to better myself and succeed. With Under the Freedom Tree it was a spiritual experience for me as an African American. The issue of slavery can be a sensitive subject, that’s why it was so important for me to visit the sites and gain a deeper understanding of what I’m illustrating. To see the Emancipation Oak, a 400 year old tree that still stands to this day in person at Hampton University, and to stand on the very shore in Norfolk, VA and look across the Chesapeake Bay, filled me with so many ranges of emotions. The contraband slaves are not widely known in history so I wanted to illustrate their amazing story of bravery, courage and strength with honor. 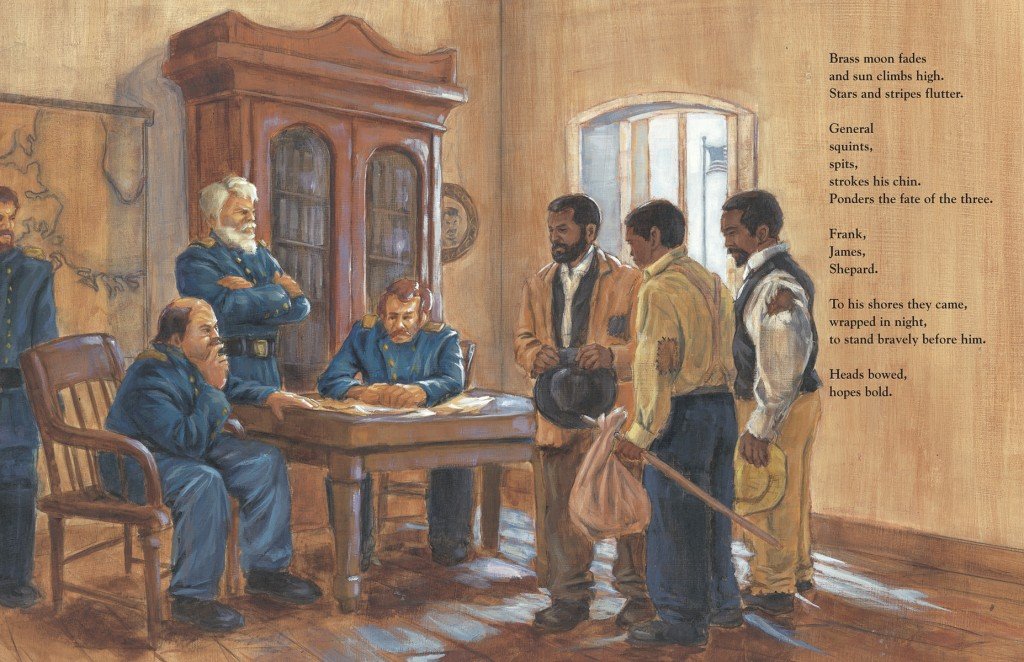 Interior spread from Under The Freedom Tree by Susan VanHecke with illustrations by London Ladd, Copyright © 2014, Charlesbridge Publishing.

GRWR: To date the books you’ve worked on have dealt with slavery, civil rights and outstanding, influential African Americans. Are these the themes that speak to you the most as an illustrator? What other types of subjects can you see yourself illustrating?

Ladd: The human spirit interests me. I love stories of a person or people achieving through difficult circumstances by enduring, surviving and overcoming. I find it intriguing to see what causes a person to push themselves to succeed. Specific subjects that I would like to illustrate are cowboys, pirates and the bible, and I also desire to illustrate a graphic novel, too. I recently finished a book of poems about young people lending a hand to help others.

GRWR: Would you like to write and illustrate your own book one day?

Ladd: Yes!!! I have a few stories on my heart that I want to write and illustrate. Some are historical characters and some are fictional stories incorporated with my personal experiences.

GRWR: Your involvement in promoting art is impressive and I’ve read you’d love to open an art school. Do you feel schools today are not as involved in promoting the fine arts as they used to be therein limiting children’s exposure to an important form of self-expression?

Ladd: It’s always been a passion of mine to want to give back/share with people who have an interest in creating art of some form. I believe art crosses racial, social, economic barriers. For three years I’ve worked at an inner city afterschool program teaching art to 4th and 5th grade students so I feel schools especially in the inner city are interested in the arts but the funding isn’t there like years past so they do the best with what they have. 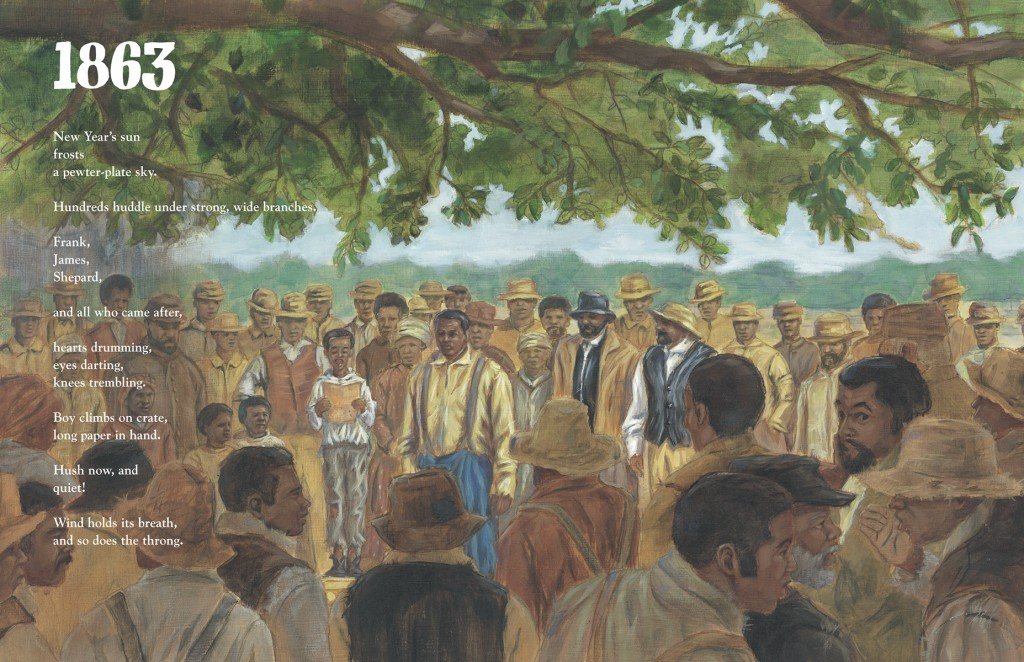 Interior spread – The reading of the Emancipation Proclamation from Under The Freedom Tree by Susan VanHecke with illustrations by London Ladd, Copyright © 2014, Charlesbridge Publishing.

Thank you so very much, London Ladd, for both your time and your information. It’s been a fascinating interview.

If readers want to find out more information, you can visit the Under The Freedom Tree website here: www.UnderTheFreedomTree.com.

The Cart That Carried Martin by Eve Bunting

Tired of Your Name? Visit The Change Your Name Store by Leanne Shirtliffe

A ROUNDUP OF TANTAN PUBLISHING MATH CONCEPTS PICTURE BOOKS featuring: Could You Lift Up Your…