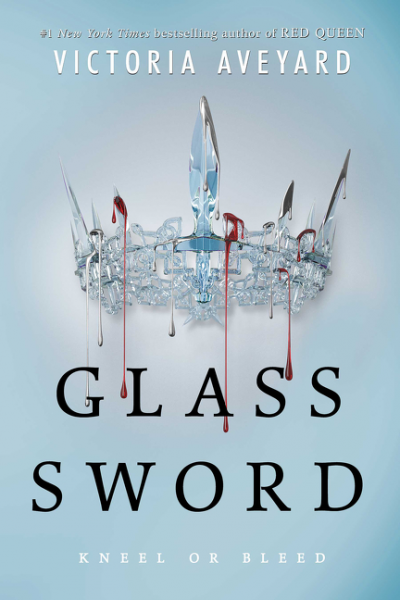 Glass Sword by Victoria Aveyard is the next installment of her riveting series Red Queen. The story picks up right where we left off in the previous book. Mare and Cal are now fugitives, having fought their way out of their own executions. Maven, now king after using his mother’s power to force Cal to kill his own father, is in pursuit of Mare and Cal aided by his entire army and a society of Silvers, who have been manipulated to believe in his lies. Mare realizes that the only way to win this fight is to find others like her, those they call “new bloods.”

Aveyard brings in a little bit of an X-Men feel as the “new bloods” are slowly found. They are Reds with Silver abilities but are stronger than the Silvers themselves. They learn how to control and use their powers while preparing for war against Maven. However, Mare is constantly torn between her need to save others, her own self-doubt, and the betrayal that surrounds her. Two things are always constant in this book, lives are always at stake and you never know whom to trust. As Julian, Mare’s former teacher and Cal’s uncle, said repeatedly in Mare’s lessons, “Anyone can betray anyone,” and this mantra remains true as the story progresses.

Mare is searching for the new bloods, but Maven is too, so every venture out to find them is a risk of her life and that of her team. Maven sets trap after trap in order to catch the new bloods and, more importantly, to try and catch Mare. Throughout the novel, the relationship between Mare and Cal is ever intriguing, but it’s not clear what their future holds. This book is hardly predictable, but the one entirely foreseeable element is betrayal, right up until the end. It will be tough to wait an entire year to see what happens next, but I will be on the edge of my seat, eagerly awaiting the next book and what is sure to be an exciting conclusion.