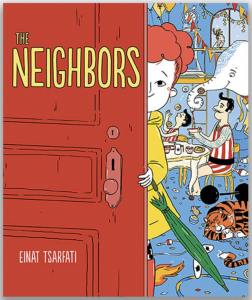 Whether or not children have ever set foot in an apartment building, I’m guessing they’ll want to after reading The Neighbor so they can try their hand at guessing who lives behind closed doors. The narrator of this charming picture book is a little girl who lives “in a building that is seven stories high.” Whenever she heads upstairs and passes by her neighbors’ doors, she imagines, based on clues from each door and its surroundings, just what type of person or persons makes that apartment their home.

Not only is the story packed with wonderful artwork, it’s also full of a bevy of interesting apartment dwellers. Take for example the ground floor flat. It’s got over half a dozen locks and a closed circuit security camera so the youngster figures that inside lives a family of thieves whose assorted hauls range from Egyptian artifacts to a pirate’s treasure. The apartment that has a wheel outside must belong to acrobats. This spread alone (one among many!), with its uni-cycle riding monkey on a slide, an elephant and a fire breathing baby, warrants multiple views and includes a surprise for observant readers. Muddy footprints on a doormat hint at an explorer’s presence on another floor. It’s likely a vampire resides on the floor where the lights always go out on the landing as the narrator makes her way home. Many apartment buildings I’ve visited abroad have the hall lighting on timers so this makes perfect sense since the picture book was translated from Hebrew. I appreciated the Art Nouveau touches in the vampire’s abode as well as his flair for clothing design. The music emanating from the door on floor six means only one thing—it’s party-time as depicted in another detail-rich spread. The little girl reckons the musical family inside “celebrates someone’s birthday at least once a week.”

So what about the girl’s apartment where she lives with her folks? It’s no surprise she finds her parents boring despite loving them. Her bedroom is filled with souvenirs from all over the world and she probably dreams of exotic places and exciting adventures. But, little does she know that, as she drifts off to sleep, her parents are superheroes living a wild life outside her very own bedroom door

Tsarfati’s included a cleverly hidden hamster (note the LOST signs at the book’s beginning) to search for in the comfortably cluttered and colorful illustrations plus one other treat. When her folks check if she’s asleep, the little girl’s eyes look slightly open so she may actually know what her parents get up to. Perhaps it’s a case of the grass is always greener in the other apartments? That it’s open to interpretation is just part of the pleasure derived from reading The Neighbors. I love that the book beautifully incorporates senses such as smell and sound into the story. Parents, caregivers and teachers can take advantage of several possible activities to explore using the book as inspiration. For example, have children create their own doors for you to guess who lives behind them and vice versa. Or maybe cover the illustration after studying the door in the The Neighbors to see what your child can conjure up. This is the kind of book I would have returned to again and again with my children and I hope you’ll agree.