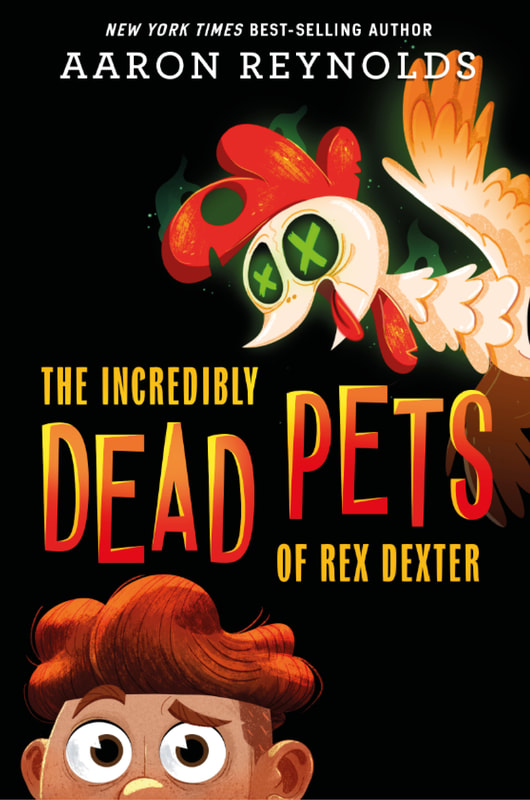 Make room on your bookshelves for The Incredibly Dead Pets of Rex Dexter, the middle grade novel debut by Aaron Reynolds. Sixth-grader Rex Dexter always wanted a dog. A chocolate Labrador to be exact. For his birthday, Rex’s parents give him a chocolate cake shaped like a Lab with chocolate ice cream and—finally!—his gift is in a box with air holes so it must be . . . a chicken?! When Rex complains that a chicken isn’t a pet, it’s a Happy Meal, he’s told this is his practice pet. So he does what any kid would: puts a leash on his chicken and heads out with his best friend, Darvish, to buy pet supplies. Then the strangeness begins.

With a nod to the Tom Hanks movie, Big, Rex finds a vintage carnival game called the Grim Reaper. Thanks to some chicken pee, Rex loses the game and receives a cryptic curse. But, it may be worse news for the chicken who, in Rex’s care for about an hour, has a run-in with a steamroller; the steamroller wins. Rex failed to keep his practice pet safe but, no worries, Rex will have plenty of time to make amends when the squashed, “ghostly fritter” of a chicken returns to haunt him—though the chicken believes their besties and wants to just chill. The now-named Drumstick is merely the first dead animal to accompany Rex through this hilarious story.

Aaron Reynolds is a master at comedy and this middle-grade novel is no exception. He had me at the title. If you like a mysterious ghost story that’s not very spooky, then this is the book for you. Kids will enjoy trying to figure out “who done it” as endangered animals in the zoo start meeting their demise and showing up in Rex’s bedroom as ghostly nuisances. More than two dozen black-and-white images scattered throughout add to the humor.

I’m a big fan of Reynolds’s books and read his releases hot-off-the-press. My favorite book of his had been (picture book) A Creepy Pair of Underwear but The Dead Pets of Rex Dexter is now tied for that spot.

Click here to order a copy of The Incredibly Dead Pets of Rex Dexter or visit your local indie bookstore.
e
Disclosure: Good Reads With Ronna is now a Bookshop.org affiliate and will make a small commission from the books sold via this site at no extra cost to you. If you’d like to help support this blog, its team of kidlit reviewers as well as independent bookshops nationwide, please consider purchasing your books from Bookshop.org using our affiliate links above (or below). Thanks!