WHO GOT GAME?:
Baseball – Amazing But True Stories 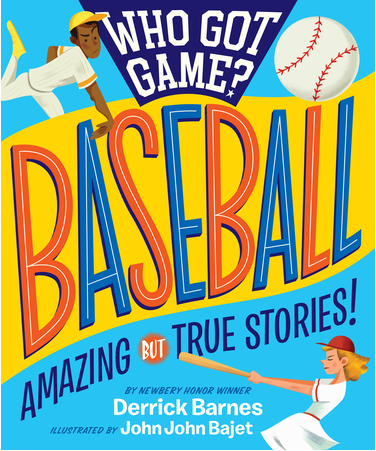 Of all the sports games I’ve ever attended, baseball ranks number one. In fact, before the pandemic, my family had plans to see the Quakes, our favorite minor league team, this summer. A few years ago we even visited the Baseball Hall of Fame in Cooperstown which I loved. Despite MLB’s shortened season, baseball remains America’s pastime and I’ve got the ideal book to read as a companion to catching the sport on TV: Who Got Game?: Baseball – Amazing But True Stories! written by Newbery Honor Winner Derrick Barnes and illustrated by John John Bajet.

Dig into a box of Cracker Jack or open a bag of peanuts to munch on as you read the book in either one sitting, or slowly (with many seventh inning stretches) to savor all the “unrecognized and unheralded figures and the untold stories that hold important spaces in baseball history.” If you’re a die-hard fan, you will easily devour every page. If you’re simply looking for some inspirational stories to feed your soul, you too will get your fill.

Who Got Game? is divided into four chapters with headings that immediately clue you in to the subject matter: “Pivotal Players,” “Sensational Stories,” “Radical Records,” and “Colossal Comebacks.” Read them in order or jump around depending on what strikes your fancy. After that, Barnes recommends you take note of what you learn, remember the people who stood out and their stories, “then tell everyone you meet!”

Find out about Andrew “Rube” Foster, the father of the Negro Leagues in Chapter #1. All-Black baseball teams emerged in the 1860s, but they were unofficial and remained that for several decades. Foster noted that when the White players came to Texas and he would practice with them, they were organized and professional. He wanted the same thing for the Negro Leagues and so, in 1920, Foster, along with “seven owners of other all-Black teams, created the Negro National League (NNL).” In fact, in 1947 Jackie Robinson was playing for the Kansas City Monarchs, first part of the NNL, and then the NAL (Negro American League) before leaving to join the Major Leagues as the first Black player.

In Chapter #2 (all the chapter numbers are cleverly located in a baseball graphic), you’ll be blown away by the story of 17-year-old Jackie Mitchell. Mitchell began learning baseball from the moment she could walk. Her dad taught her and then her neighbor, Charles “Dazzy” Vance, (an eventual Hall of Fame pitcher), took over. Not bad for a local coach! Her talent earned her a place on an all-girl team in Tennessee where she was spotted by a “big-time publicity guy” named Joe Engel. Engel “invited her to join his all-male team in a game that was the stuff of legend.” Imagine sitting in the stadium and seeing Babe Ruth come up to bat and, opposite him, at the pitcher’s mound, stands a teen-aged girl. Four pitches later he was out! She followed that by striking out another pro, Lou Gehrig, in just three pitches! No small feat when you’re up against two of baseball’s greats. Was this arranged? All three of the players involved never admitted to it, so we’ll never know. Regardless, it had to be a sight to see.


Bajet’s cartoon-style art has a nostalgic feel about it and helps ground every story shared. I especially liked the illustration of “Royals Legend George Brett and The Pine Tar Incident” and as a former New Yorker and Mets fan, I also loved the pictures of Roberto Clemente. Seven pages of useful back matter such as additional tips and resources, websites to explore and a glossary, complete the book.

There are lots more stories of unsung heroes, winners, losers, and all kinds of records broken and career comebacks to read about in this fabulous compendium that will make you appreciate the beloved game of baseball. Pick up a copy of Who Got Game? today while the season’s still on to enjoy each game, even more, knowing about all the amazing but true stories. “Holy cow!”

Read a review of another book by Derrick Barnes here.

Not Always What They Seem