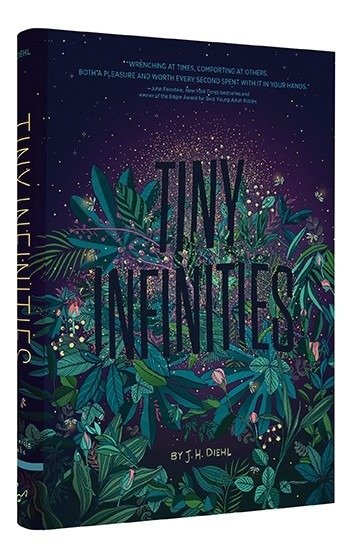 In Tiny Infinities, the debut middle grade novel by J. H. Diehl, the summer when Alice turns thirteen, her family’s structure disintegrates. Her mother has become a bedridden recluse, her father moves out, and Alice’s two brothers are temporarily placed with their aunt. Alice willfully stays at the family home, erecting the Renaissance tent her parents met in, resolving to sleep in the backyard until her father returns. Due to finances, cell phones, internet, and camps are cut. Earning money babysitting is bittersweet—Alice’s parents are too distracted to pay much attention. Alice discovers each family has complications. Piper, the young girl she watches, has an undiagnosed loss of speech and possibly hearing.

This quiet story considers deep issues including how one family member’s illness or injury affects everyone. Because of her parents’ split and her mother’s inability to recover, Alice loses touch with close friends rather than explain.

Swimming keeps Alice centered; she’s determined to get her name on her swim team’s record board. A friendship with the new girl, Harriet, develops. Harriet’s keen observations while somewhat off-putting are also perceptive: she advises Alice to switch to backstroke. While this is another change, Alice eventually realizes that she likes swimming backwards without seeing where she’s going; it gives her confidence in her ability to maneuver the pool, and life. Alice and her friends learn from one another how to find their way—realizing it is their way to find.

Tiny Infinities is an honest coming-of-age middle-grade novel. Alice understands for the first time that there is “no line between hot and cold, or warm and cool, love and not love. Tiny infinities [are] always going to be there.”

Fireflies play a clever role in the novel throughout. Beneath the book’s beautiful glimmering jacket is a stunning smooth casewrap adorned with fireflies. The brightly contrasting endpapers offer a pop of color. 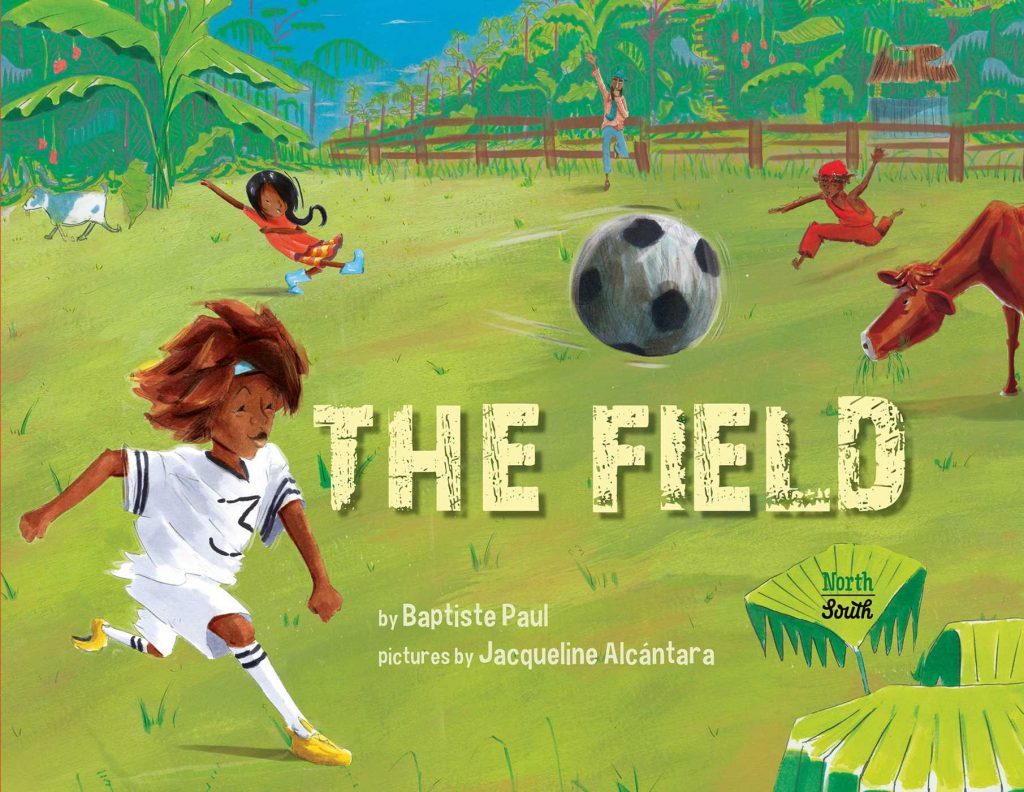 “is a debut masterpiece of collaboration and skill,” says reviewer Ozma Bryant.

In a friendly game of soccer (futbol), the magic of not only the sport but the players involved, comes into brilliant light splayed across the pages of The Field, a debut picture book by Baptiste Paul.

With a tropical rainstorm threatening the game, the players band together, solidifying their connection through love of playing ball and sportsmanship. Challenges such as the weather won’t intrude on this precious time together. The story, I might add,  is really about a group of kids—the “main character” is never mentioned by name but she’s on all the pages.

My favorite moment is when one of the opposing players is knocked down, and our main character, in her white jersey #3, reaches her hand out to him on the muddy ground asking, “Ou byen? You okay?” He responds, “Mwen byen. I’m good.” You can practically reach out and touch the splattered mud and rain that splashes across the pages as the players muscle on through, seeing the game to completion.

The sun creeps back out as the game continues, even as Mamas call the players home. Hearing a firm command “Vini, abwezan! Come now!” the children end the game then go their separate ways to rest up and rejuvenate for a new day of play.

Caked with mud and filth, children slip into tubs of warm water, smiling …  reveling in the magic that is a game well played. Dreams of new games and friendship forming float overhead, as the field lingers even in sleep.

Alcántara’s gorgeous art propels the reader forward with spare language infused with Creole words from the author’s native home in the Caribbean. The author of this amazing story explains in the back matter that Creole is rarely written, mostly spoken, and so new words are constantly being added or old ones modified in this language. A Creole Glossary is also included.

One of my dear friends hails from Haiti, and speaks Creole. He was the initial reason I was excited to read this book and learn from it. One of the first things I learned from him was that soccer was also ‘futbol’. When I saw the young girl on the cover, I wanted to put this book into his young daughter’s hands immediately. I must ask if she plans to watch the FA Cup this weekend!

I am so thankful for this incredible book and hope to share it with many readers who can also identify with its themes of friendship, connection, teamwork and not giving up in the face of adversity.

When I was a little girl, my country town didn’t have girls’ sports, so I didn’t have any formal exposure to organized competition at a young age. I use the word organized to differentiate between athletic competition, and that which girls did to compete for boys’ attention. I certainly partook in the latter.

In high school, I cheered madly for the basketball captain I was crushing on. I was myopic in my focus on him (oh, right… there were other people on the court, too), but that focus provided me with an unusual view of competition- the view he held. He was a fabulous athlete who was known to congratulate his opponents on good shots and good moves. It drove his track coach crazy when he helped his opponents with their jumping technique (yeah, I followed him in track, too). He believed that every competition was a platform for learning, about himself and others, so I learned to believe that, too.

When our daughter (yeah, I married him twelve years later) began playing basketball, we decided to coach her AAU (Amateur Athletic Union) team so she would learn about competition in its purest form… and here it is: In any competition, the only one you can ever truly compete against is yourself. Win or lose, you have to ask yourself, “Did I do better this time than I have ever done before?”

Who cares if you smoke a bush-league opponent? Where is the honor in that? We taught our players to work on their skills instead of crushing weaker opponents. Instead of racking up the points, they moved the ball around the court until every teammate scored. Rather than feeding the ball to the go-to scorers, they selected something to improve (blocking, passing, boxing out, rebounding, etc.). Honing their skills taught them to control the tempo of the game.

But what about when they lost? It was crushing to young girls unaccustomed to losing. The first thing we did in our (sometimes tearful) post-game huddle was to review their stats and emphasize their personal bests. We reminded them anyone who achieved a personal best had successfully competed, especially in the face of a stronger team. Grins replaced tears as they listened to how they improved, strengthening their resolve to do better the next game.

Was this philosophy effective? It sure was. By the time they finished Middle School, they had swept States two years in a row. In the ninth grade, nine of our players were starters for their High School Varsity teams.

And, as Petir tells Maid Rianne in Fairly Certain, you have control over who you bring to the game.

Disclaimer: The opinions expressed in this guest post are solely those of the author and may not not necessarily reflect the opinions of Good Reads With Ronna reviewers.