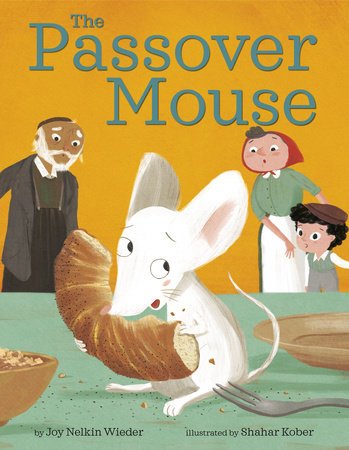 The night before Passover, a hungry and mischievous mouse steals a single bread crumb from a pile of chometz (leavened food) on a table where it waits to be burned in the morning, (to prevent the house being contaminated during Passover), and the adventure of The Passover Mouse begins! The mouse is chased first to the cobbler’s house, and then to the matchmaker’s. A different mouse and a cat join the fun, and confusion and chaos descend upon the community as they try to figure out what to do about the homes that have possibly being contaminated with the stray chometz.

This playful and inspiring tale is based upon and introduces children to a passage from the Talmud, a collection of ancient rabbis’ commentaries on Jewish law. Along with delightful illustrations by Shahar Kober, the traditional story presents a conundrum for the community, which is not resolved right away. The puzzling problem is presented to the town’s Rabbi, who presents an answer, but how to carry it out is ultimately suggested by a child, who speaks up and suggests community cooperation, which is embraced by everyone.

Joy Nelkin Wieder’s debut picture book reads like a traditional folk tale, and kids will have fun learning the many Hebrew and Yiddish words which are used throughout the story. Some may be familiar (Oy vey!) while some may be less known (yeshiva) but thankfully there is a glossary in the back with definitions along with an indication of how to pronounce them. An author’s note is also included which explains the original passage in the Talmud.

Kober’s illustrations have an engaging cast of lively, multi-generational characters that grow in numbers as the story progresses. Individual characters are recognizable and can be found, and followed, through the book. Kids will want to linger over the assorted expressive faces which reveal their personalities and reactions. The Seder scene accurately depicts traditional food, and the clothing and setting throughout portrays a traditional, fabled Jewish community. Kober’s consistent pallet of earthy colors and bright accents invoke a warm and inviting feeling that enhances the warmth and togetherness of this assorted but unified community.

The story starts with the mouse, but the main thrust of the story involves the community who take a journey from confusion, blame and arguing, to unity—coming together and working together to solve their problem. In the end, everyone has re-established their friendships, spread some kindness, and even the mouse (and its companions) don’t go hungry (don’t miss the art on the last page! A wonderful tale and moral not only for Passover, but for any time of year.