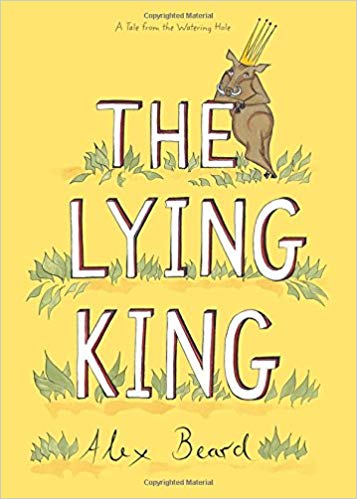 Alex Beard’s fourth book in his Tales from the Watering Hole series is the fifty-four-page picture book, The Lying King. The bright-white uncluttered backgrounds direct focus to a self-confident warthog lacking a moral compass who aspires to be king. Though the animals notice his misbehavior, they merely “think on it sadly,” too few willing to vocalize their concerns. The warthog’s lies begin small but soon (outrageously) propel him to leadership.

Clever illustrations enhance the story line’s depth. Beard’s stylistic swirls found on the main character are echoed in the beautifully drawn peacocks and in some of the birds. The king’s fanciful crown has four tall spire-shaped points topped with ruby-red accents. Rhyming hand-lettered text gives the book a handcrafted feel.

Comical asides add another layer of fun. In a scene where the text states, “He turned loyal subjects against one another, by making each question the aims of the other,” the side note has the king declaring, “White zebras with black stripes are better than black zebras with white stripes.” In response, the zebras concernedly ask one another, “Which are you?”

While parents may read The Lying King as a political allegory, children will delight in the modern images and engaging rhyme offset by a story that feels old-fashioned. Parabolic lessons include the importance of being honest, fair, and authentic.

Ultimately, the piggish king’s words ensnare him. Awakening from their stupor, the kingdom’s animals realize, “A lying pig should not be the king.”