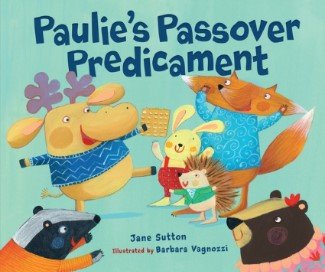 I don’t have a flair for cooking and it seems the same can be said about the main character and moos-ician, Paulie, in Paulie’s Passover Predicament by Jane Sutton. As the Passover Seder host, Paulie gets all the important dishes wrong. But unlike me, Paulie scores points because he at least makes the effort to prepare an entire meal whereas I’m more comfortable (and it’s safer, too) being someone else’s Seder guest.

Paulie’s invited all his animal friends over which includes Evelyn, Horace, Irving, Moe and Sally. At first his pals seem impressed by his Passover Seder spread. Soon however, as each traditional dish is served, there are giggles, chuckles and guffaws. “I see you have an extremely large egg on your seder plate,” said Moe. How big you ask? It’s an Ostrich egg!

There’s pepper in the salt water that’s supposed to represent “the tears of our ancestors when they were slaves,” but Paulie’s put pepper in so the pepper wouldn’t be jealous of the salt. He’s mixed pine cones instead of walnuts into the charoset, uses grass in place of parsley, and for the maror he’s carved a horse out of a radish instead of using horseradish!! But rather than ridicule Paulie who is embarrassed and saddened by his mistakes, his pals realize he’s just put his own special spin on the seder and love him for it. Happy again, Paulie reflects on the special meal. “He loved dipping his hoof in grape juice as he and his friends recited The Ten Plagues.”

When Sally is selected to hide the afikomen, everyone goes searching. Lucky Paulie finds it but unluckily gets stuck in the basement until his ingenuity saves the day (and the afikomen). I like the symbolism in his being set free just like our ancestors were and the special camaraderie amongst all the friends afterwards as they sing Dayeinu. “If God had only taken us out of Egypt, it would have been enough. Dayeinu.”

Vagnozzi’s joyful artwork will delight youngsters, some of whom may be old enough to recite The Four Questions. Paulie’s Passover Predicament is a light-hearted look at the holiday and reinforces the message that it’s really not about the food, but about being together and honoring the traditions of the past generations. Enjoy your read-aloud time with this story and wishing all those who celebrate a very happy Passover 2018!

About Passover From Paulie’s Passover Predicament:
Passover is a spring holiday that celebrates the exodus of the Israelite slaves from Egypt. The holiday begins with a festive meal called a seder. Symbolic foods recall the bitterness of slavery, the haste in which the Jews left Egypt, and the joy of freedom. Children ask The Four Questions and look for the hidden piece of matzah—the afikomen—at the end of the meal.