is reviewed by Cathy Ballou Mealey. 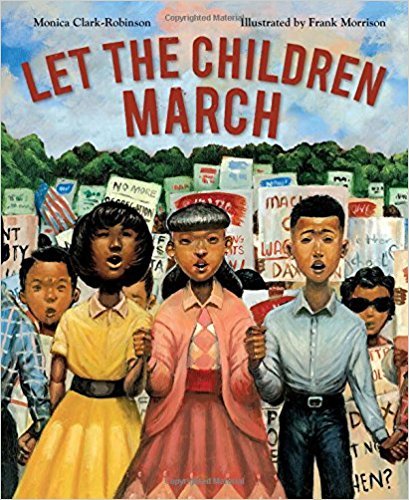 On a warm May day in 1963, young feet took the first steps on an inspiring crusade for civil rights. Through the observant eyes of a fictionalized girl, debut author Monica Clark-Robinson depicts the momentous events surrounding the Birmingham Children’s Crusade in LET THE CHILDREN MARCH, illustrated by Frank Morrison.

As the book opens, Dr. Martin Luther King Jr. has delivered a compelling speech calling for peaceful protest that has touched his listeners’ hearts and minds. But the adults feel torn by their desire to take action and their responsibilities to home and family. The children, equally moved, volunteer to unite and march in their parents’ stead. Dressed in their best clothes, the apprehensive but determined marchers walk hand in hand for change and freedom. Clark-Robinson pulls no punches in her succinct and moving descriptions of the events, noting the angry crowds, potent threats, and physical dangers. Yet her poetic text is underscored by the palpable sense of pride, courage and hope that sustain the young marchers throughout their ordeal, from march to imprisonment to release.

Morrison’s vibrant illustrations powerfully enhance Clark-Robinson’s tale, bringing to life the intensity of terrible experiences that the marchers endured. Adults as well as children are represented with portrait-like detail throughout. They convey serious, determined dignity through their steady eyes and calm, straight-shouldered stances. While the faces are ultimately most compelling, Morrison incorporates signs, hoses, flags and fences that communicate the hostile environment with depth and poignancy.

LET THE CHILDREN MARCH will surely spur important and essential conversations between young readers and the adults who share this book with them. Additional information is supplied in an afterword, a bibliography and sources of quotations. A timeline, illustrated across the endpapers, grounds the tale from beginning to end by showcasing the young faces that helped sow the first seeds for justice and freedom.