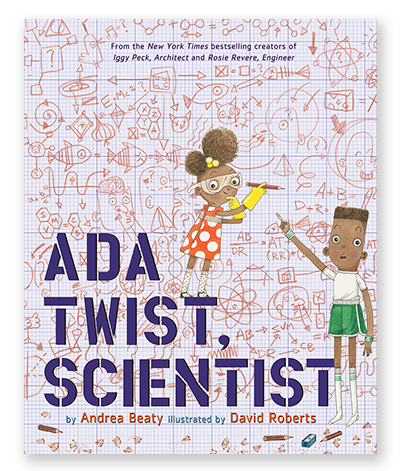 Ada Twist, Scientist is the third rhyming picture book from Andrea Beaty and David Roberts featuring an extraordinary child whose talents can be problematic. Ada Marie Twist doesn’t speak until age three then asks “Why are there pointy things stuck to a rose?” “Why are there hairs up inside of your nose?” Her parents tell her that she will figure it out.

Throughout the chaotic story, Ada tries to find the source of a terrible smell. Though the reader is never told where it comes from, children will be happy to help Ada out. The crazy antics of Ada’s experiments are illustrated in vivid detail.

When her parents finally have enough, they send Ada to the family’s “Thinking Chair.” In this pivotal page, we see small Ada surrounded by white space—with a sharpened red pencil surreptitiously nearby. Kids gleefully grasp what comes next as Ada cannot contain her big thoughts.

Thankfully, her parents understand. “They watched their young daughter and sighed as they did. What would they do with this curious kid, who wanted to know what the world was about? They smiled and whispered, ‘We’ll figure it out.’” Together, they help Ada become a young scientist . . . if only Ada could figure out where that awful smell originates.

THE VERY BEST DOG: MY LIFE STORY AS TOLD BY MY HUMAN Design by Becky…