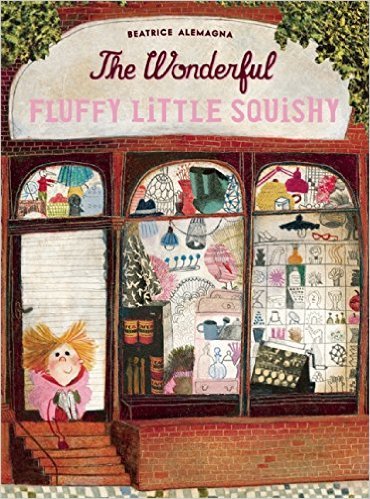 Edith – or “Eddie” as she is called – is a five-and-a-half year old charmer with straw-spikey hair, a pert pug nose, and a bright fuchsia hoodie in Beatrice Alemagna’s The Wonderful Fluffy Little Squishy. She also has a problem – it is her mother’s birthday and she needs to find the perfect present, stat. Overhearing something about a “fuzzy – little –squishy” leads her to assume that her sister might scoop the “right” gift for their mother before Eddie. So our intrepid heroine abandons a steaming teacup and sprints into the streets of her charming French village in search of the fuzzy little squishy gift.

In her wonderful walkable neighborhood, Eddie visits the baker, the florist, a clothing boutique, the antique dealer, and the butcher. She asks each adult for assistance in finding a squishy, fluffy or fuzzy something. Although they listen to her plea and try to help, each giving her a tiny treasure (except the grumpy butcher), none have the elusive gift she seeks. Discouraged, Eddie heads home in the falling snow.

Suddenly, she hears giggles over head and spies “it” – an adorable fluffy little squishy at last! A long-tailed, four legged, be-whiskered poof that is as pink as can be. Eddie immediately knows that this creature has a thousand uses, from pillow to plant to paintbrush. The small gifts from her neighborhood friends come into play as Eddie rescues the Squishy from a series of near disasters and discovers something wonderful about herself as well.

Alemagna excels in depicting enticing shop windows and displays, bursting with scrumptious pastries, delicate flowers, intriguing antiques, and a fold-out triple spread butcher shop. Her illustrations incorporate bursts of energy and action that draw the eye across the page, from steaming cup to falling snow and gushing fountains. Even little Squishy looks as though he might have been zapped by an electrical socket, shocking his fur into uncontrollable chaos. Excellent depictions of winding cobblestone streets, crowded village shops and slate roofed homes will help children appreciate the European sensibilities of this magical adventure story. And they will certainly find Eddie an irrepressible and appealing heroine whose quest is as quirky as it is delightful.

THE WONDERFUL FLUFFY LITTLE SQUISHY was recently awarded the 2016 Mildred L. Batchelder Award by the Association for Library Service to Children (ALSC), a division of the American Library Association. The Batchelder Award is given to the most outstanding children’s book originally published in a language other than English in a country other than the United States, and subsequently translated into English for publication in the United States.

Where Obtained:  I reviewed a copy of THE WONDERFUL FLUFFY LITTLE SQUISHY from the publisher and received no other compensation. The opinions expressed here are my own.