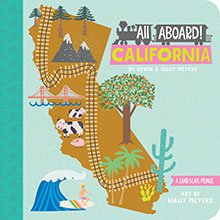 From the folks that gave us the irresistible BabyLit® Books comes a new series that promises to be another hit. It’s never too early to share the delights of our world with little ones whether that be via personal stories, songs, photos, books, TV, film or travel.

This attractively designed board book primer series introduces youngsters to the varied landscape of California, the stimulating sights of New York City, and the romance and allure of Paris and the French language. Each book consists of 22 matte finished pages filled with bold graphics in an array of colors that I might not ordinarily combine, but work wonderfully together. I want tote bags or tees of all the artwork, it’s just that visually rewarding!

In All Aboard! California, we tour the Golden State on board a train heading from south to north, making stops in the Mojave desert, and along the coastal beaches that have beckoned sun bathers and surfers for decades. After that the train heads into the Hollywood Hills, past Orange Groves and then makes tracks through the farmlands of the Central Coast. Parents will enjoy pointing out to kids how the train fills up with surf boards, oranges and cows while cruising toward its ultimate destination, the magnificent Redwood Forest. But not before first visiting the Sierra Nevada Mountains, Nappa’s vineyards and one other popular tourist attraction, San Francisco. The book ends with a helpful map and the official California State Flag. 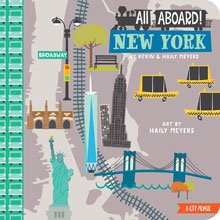 Next, with All Aboard! New York, we’re visiting the Big Apple and traveling through the Lincoln Tunnel from New Jersey into Manhattan, something I’ve done countless times (and even once got stuck in the tunnel when my car conked out!). We wind our way around Central Park and head over to take in the sights of Times Square (NOTE: Make sure to check out all the billboards as there’s lots of fun things to discover), but not before getting seated front row center at a Broadway show. What’s a trip to New York without skyscraper spotting including the one and only Empire State Building, a not-to-be-missed landmark of the Manhattan skyline? This trip also includes a ride to lower Manhattan to see the new Freedom Tower at One World Trade Center and the National September 11 Memorial as well as a glimpse of the NYSE on Wall Street. Two of my personal faves are featured in All Aboard! New York and those are the Staten Island Ferry for a breathtaking view of the Statue of Liberty and the Brooklyn Bridge spanning New York’s East River. Before leaving the city, you can even help your child count how many taxis appear in book. Remember also to show them the map at the book’s end with train cars running along the bottom of the two-page spread decorated with delicious foods found throughout the boroughs such as cheesecake, pretzels and bagels. 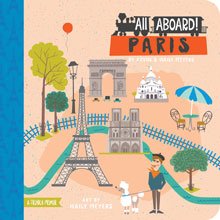 Last but not least is the City of Love as featured in All Aboard! Paris. I’m thrilled there’s such an adorable board book to not only nurture a love of the French language but of the capital city itself. It’s Bienvenue! Welcome! all around as we chug our way past the Canal de L’Ourcq and see the famous Monument at Place de la Bastille. Is that rain beginning to fall? Mais oui! It’s time to get out a Parapluie or Umbrella. The train passes close by a lovely Garden (Luxembourg perhaps) where children sail boats and lovely flowers are in abundance. Also included are Notre Dame (Cathedral), the Seine River, Sacré-Cœur atop the hill of Montmartre and the Louvre Museum. Grab a baguette and cruise on over to see the Arc de Triomphe, the Élysée Palace (or it could be Versailles – your call parents!), and 19th century iron structure we know as the Eiffel Tower. Words covered range from boy and girl to bridge and rain, and lots more, bien sûr!