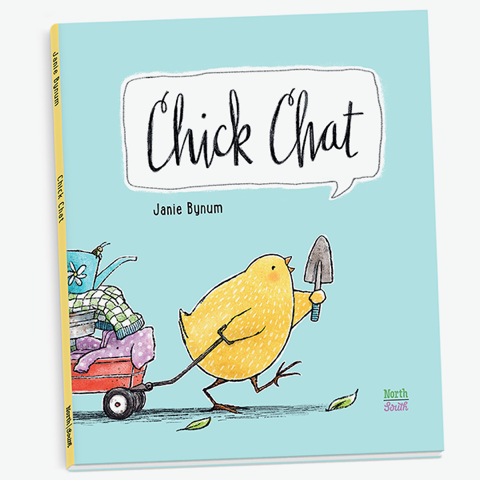 It’s Day One of the CHICK CHAT BLOG TOUR as well as its book birthday! Peep! Peep! GRWR is so happy to participate and celebrate the hatching. Please enjoy the following interview with Chick Chat author-illustrator Janie Bynum and her insights on this fun new read-aloud picture book for children.

Friendship comes in all shapes and sizes.

Peep, peep, peep! Baby Chick has a lot to say!

Everyone in Chick’s family is too busy to chat with her. But when chatty baby Chick adopts a large egg—she finally finds a friend who is a good listener. When her egg goes missing, Chick is heartbroken, until she finds that it has hatched into a brand-new friend!

GoodReadsWithRonna: Hi Janie! Welcome to the blog. I’ve got lots of questions for you today.
In your author bio on the book’s copyright page, you mention how talkative you were as a child. Can you expand on this and how it influenced creating your main character Baby Chick?

Janie Bynum: Being an inquisitive, talkative, and determined child, I’m sure I tested the patience of my family—and quite a few teachers. Baby Chick and I share all of those personality traits—as well as being a fairly self-reliant youngest sibling. As I wrote and revised Baby Chick’s story, this very talkative youngest sibling emerged. So I ended up writing from a perspective (with a voice, as it were) that I understood as a kid.

In early versions of the manuscript, Baby Chick actually spoke instead of only peeping. But, I ultimately chose to have her peep in such a way that sounds like she knows exactly what she’s saying (and she does). This way kids can interpret what she may be saying—either inferred by the illustrations or by whatever words they imagine for her.

GRWR: Which came first, the Baby Chick character design or the story?

GRWR: It was funny how everyone in Baby Chick’s family is unaffected (to the point of almost ignoring her while they’re otherwise occupied) by her nonstop peeping while she carries on joyfully by herself. Is there something to be learned from her sheer self-contentedness?

JB: Possibly … by enjoying our own company, not being entirely dependent on others to “make” our happiness for us. Baby Chick is creative and makes her own fun; and, in doing so, she discovers something to nurture, which ultimately hatches into a friend who listens.

GRWR: I was absolutely convinced Baby Chick had found a rock not a big egg. Was this deliberate?

JB: No. The giant Galapagos tortoise’s egg—which I used for reference—looks very much like a round stone. Only at first, when she hasn’t fully unearthed the object, does Baby Chick not know that it’s an egg. But once she uncovers it, she realizes it’s some sort of egg—maybe not a chicken egg because it’s so round. But Baby Chick either doesn’t notice the difference or doesn’t care. It’s an egg without anyone to tend it, so she decides to be its guardian.

GRWR: I’m curious why you decided to make the baby turtle a quiet character rather than one “with a lot to say” like Baby Chick?

JB: I could’ve made the baby turtle/tortoise even more talkative than Baby Chick, which would’ve been funny. But I wanted Baby Chick to be rewarded (for all her nurturing and protection of the egg) with a friend who likes to listen. It’s also a sort of celebration of the yin/yang relationship, how seemingly opposites are actually complementary (in this case extrovert/introvert).

GRWR: Do you see Chick Chat as primarily a friendship story or did you feel there were other themes you wanted the book to explore?

JB: The friendship theme is wrapped around a story about self-sufficiency; and, as you noted earlier, self-contentedness. So, it really has two main themes.

GRWR: What medium do you work in when creating your artwork?

JB: I used a combination of digital media and traditional watercolor, which is the way I generally work. For Chick Chat art, I worked on my iPad (in an app called Procreate) and in Photoshop on my Mac computer with large monitor. I used traditional watercolor for some areas, and added real paper and paint textures (with Photoshop layers) to give more depth to some of the digital color.

GRWR: As someone who began telling stories first visually, do you usually create your dummy with thumbnails and then add the prose later?

JB: I usually have a character in mind first that I must draw so that I can get to know them. A seed of a story germinates as I’m drawing. As I start writing the story, I sometimes create a simplified mind map to look at arc, action, and direction possibilities. Then I write some more. And I revise. And then I revise the text some more.

When I feel like I have a fairly finished manuscript, I start thumbnails. Inevitably, the text changes as I work on thumbnails and rough sketches. So, as I create the rough dummy, I work back and forth between words and pictures until I feel confident that the story (both visual and written) is ready to submit to my agent.

GRWR: I enjoyed a lot of the little unexpected details you included in the illustrations like Baby Chick’s grasshopper friend (or cricket), and the punny titles of the books Sister is reading. Did you do this in all the books you illustrate even if you didn’t write them?

JB: Thank you. Since I write/illustrate for a fairly young audience, I try to add details that older readers (especially adults) will enjoy. While I don’t include a small observer character (who sometimes participates) in all of the books I illustrate and/or write, I have done so in a few. In Otis, which I wrote, a red bird appears in many of the pictures; and, in Porcupining, written by Lisa Wheeler, a grasshopper observes and sometimes participates.

GRWR: What do you do to spark your creativity? Is your process to work daily, inspired or not?

JB: In addition to creating children’s books, I work as a creative director and graphic designer (outside of children’s publishing), so creative problem-solving is part of my day every day. But, one of the things I do as a creativity spark—at least several times per week—is just draw for no reason at all, with nothing in mind until pencil meets paper (or stylus meets iPad). Many times character ideas come from these sessions.

GRWR: How long did it take to complete Chick Chat from the idea stage to the final book we can order from bookstores today?

GRWR: Who are some of your current kidlit illustrator faves and why?

JB: I have soooo many favorites, and for so many different reasons.

I love the color and stylized work of Felicita Sala. I adore the haunting stylized art of illustrators like Isabelle Arsenault and the cheery whimsy of Louise Gay. Carter Goodrich’s dogs are divinely humorous, and he possesses quite a deft hand with paint. With Sophie Blackall’s art, I’m inspired by her use of color, texture, and pattern. Her work is retro and contemporary, both at the same time.

Oliver Jeffers’ composition on the page (including an amazing sense of negative space) and his sensitive use of color and line inspires me. Matthew Cordell’s spontaneous linework and non-complicated watercolor embodies a spontaneous loose feel that I aspire to in my own work.

I like Ryan T. Higgins’s ink line coupled with his graphic use of shape and color (and, of course, his humor); the gorgeously strange art of Mateo Dineen; and the Matisse’esque art of Olivier Tallec.

GRWR: What’s in the works for your next book?

JB: A very creative beetle is the hero of my current work-in-progress. Also, I’m considering creating something for Gary the Worm to star in. (To find out who Gary is, visit my Instagram @janiebynum.)

GRWR: Is there anything else you’d like to add that perhaps I haven’t addressed?

JB: I’d like to let educators (including parents and grands) know that they can find Chick Chat activities at my website (janiebynum.com) and at northsouth.com/resources. And last, but not least, thank you for including me in your blog!

GRWR: It’s been such a pleasure being the first stop on your blog tour and getting to know you and Chick Chat better. Thanks for your terrific answers! 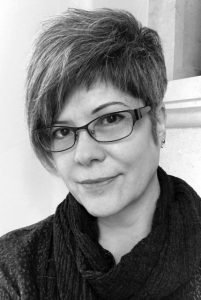 Janie Bynum grew up in Texas and graduated with a BFA in graphic design with an emphasis on illustration. As an author/illustrator, she has created many lovable characters and stories for younger children. Her work has been recognized as a Junior Library Guild Selection. She loves to travel and experience other cultures, drawing inspiration from the people, landscape, and cuisine. Known to her friends as a bit of a nomad, Janie lives in a nearly-100-year-old storybook house in southwest Michigan—for now.