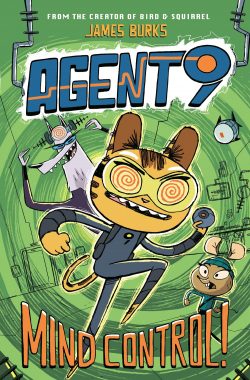 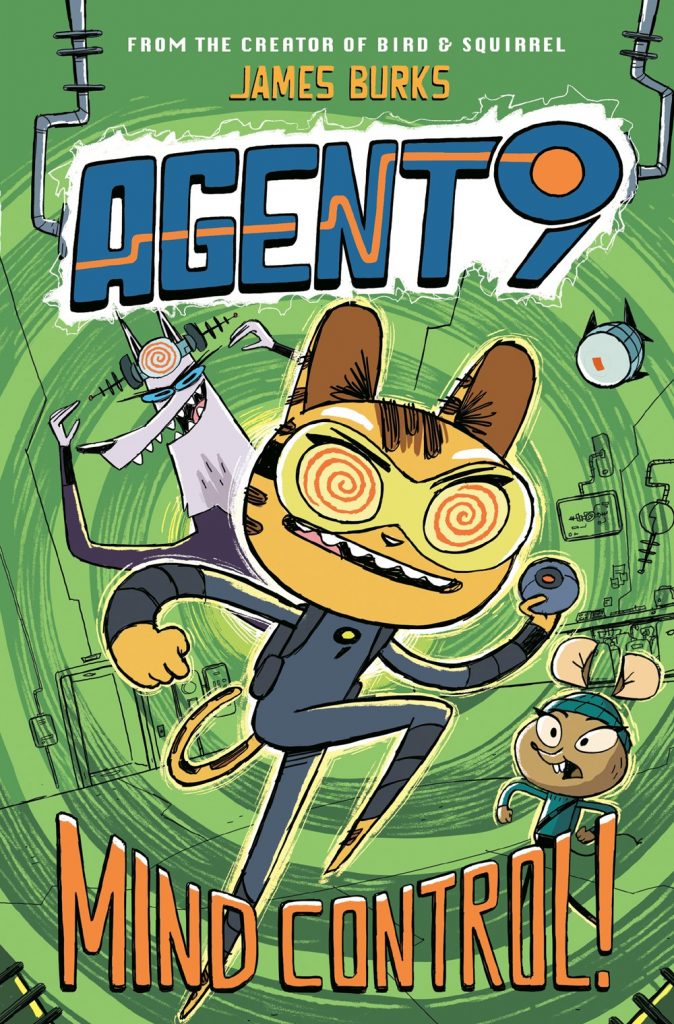 I knew I was going to love James Burks’s latest graphic novel, Agent 9: Mind Control! (book #2) from the opening sequence alone. A slick sports car races up swerving roads to the secret lab location of DiViSiON, an evil organization headed by Octopus (aka IQ). Wolf, the novel’s nemesis, emerges from the vehicle and traverses a bridge as a nasty storm unleashes its fury. The dark tones, pounding rain, and the familiar spy tropes of a James Bond film instantly assure us that, like most good spy stories, we’re in for an enjoyable but rocky ride.

After the scenes switch to a meeting at the headquarters of S4 (Super Secret Spy Service – this book’s equivalent to Bond’s MI6, British Intelligence) Agent 9 and his flying fish sidekick, Fin, learn their new covert mission from O, the big boss. They must thwart the efforts of DiViSiON to steal crucial components needed to construct a menacing Mind Control Device. The Wolf has been contracted to retrieve these items so Nine must get them first. O also informs Agent 9 that he must partner with Traps, a mouse, on this assignment. Used to only being with Fin, Agent 9 is not a happy cat. After all, he’d had visions of winning a spot as Spy of the Month. Working with Traps meant he could kiss that thrill goodbye.

Burks blends humor into both the dialogue and the art throughout this adventure all while keeping the pace going at breakneck speed. We follow Nine and Traps first to the Rail-Con event on a high-speed train to substitute the real deal with a fake electromagnet. Unfortunately, that does not go as planned. The team thing is also proving difficult despite Traps trying her hardest to help out.

Next up is a visit to Quark Labs to grab the compact-sized nanotech battery with unlimited power and infinite possibilities. But “Once again, it appears I have outsmarted you, Agent 9,” says Wolf snarkily who always manages to show up and foil things. Only this time he’s outsmarted by Nine, Traps, and Fin, who sputter away in a slow-moving vehicle in a funny sequence of panels that pit the gang of good guys and gal against the cunning canine. And though it looks like they might succeed this time …

… things go south for the trio when Nine is forced by Wolf to choose between the battery or Traps. Soon on his trail again, the spies track Wolf to DiViSiON where he pulls some outrageous moves on Octopus in an effort to wrest sole ownership of the MCD (Mind Control Device). He then turns it on Nine in an act of pure malice. What Wolf doesn’t expect is how teamwork comes through in the end with some clever plotting and a daring and satisfying rescue.

This top-secret tale takes middle-grade readers into a world of good versus evil where humor adds levity, and characters full of personality promise to keep them hooked. Keep your eyes peeled for some suspicious insect-like creatures lurking around some corners that lead us to a secret lair and a hint of book #3’s next villain. I can’t wait. And remember, there’s no I in team! 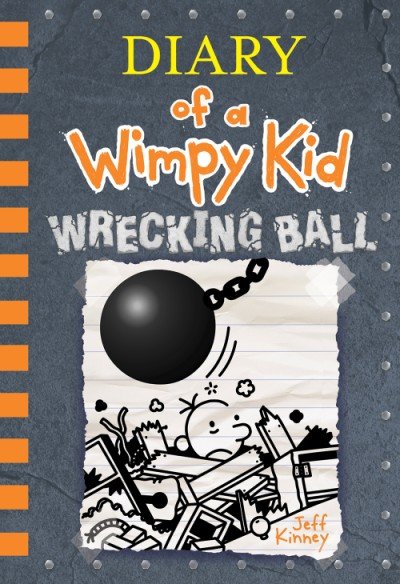 The popularity of the Diary of a Wimpy Kid middle grade series is still blazing. Kids at our daughter’s elementary school were counting the days until the release of book 14, Wrecking Ball. Then it was noses in books as they devoured Greg Heffley’s latest escapades. So what’s the appeal of this best-selling series? When I asked kids this question, the answers were simple: the familiar way the book looked, the story’s relatable humor, and its well-known characters. Great reasons since everyone likes comfortably sharing a laugh with a friend.

The title Wrecking Ball refers to construction and destruction to the Heffley’s house. As parents, we can relate to the nightmare of home improvements, remodeling, and house-hunting. Seeing these things from Greg’s perspective is, of course, funny but also very true. From tried-and-true sight gags (plumber’s crack) to the much deeper consequences of starting over elsewhere—the possibilities to reinvent yourself but also the complexity of feelings of being split from your best friend. Kids will be white-knuckled wondering if Rowley’s being written out.

Kinney’s hilarious illustrations accompany every page. I especially enjoyed Greg’s dream house which will be really small (to avoid attracting attention since he’s famous), but include a vast interlinking underground network. [PAGES 40-45] Who hasn’t envisioned what they’d build if they were rich? Greg’s idea of a glass bathtub that sits inside a giant aquarium is a kick. If your tween has some holiday cash to spend, this book is sure to please.

Fans can add to their collection with The Diary of a Wimpy Kid spinoff book Diary of an Awesome Friendly Kid as well as The Wimpy Kid 2020 Wall Calendar.