BOOKS TO READ WITH DAD OR GRANDPA

ON FATHER’S DAY OR ANY DAY 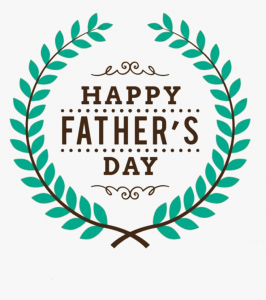 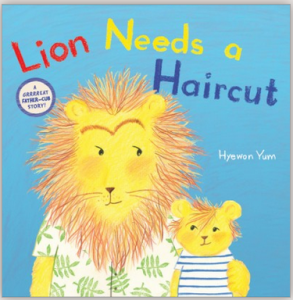 Hyewon Yum’s adorable picture book, Lion Needs a Haircut, reminds me of how much my son disliked getting his haircut when he was little. What I especially like is how Yum’s chosen to use lions, a dad and his cub, as the main characters since their manes are such powerful symbols.

The lion father lets his son know he needs a haircut, but the cub does not agree. When the big lion shows compassion, saying he understands his son’s fear, is he perhaps putting words into his son’s mouth or hitting the nail right on its head? Regardless, the cub continues to resist. When at last the little one says, “I just wanted my hair to look like yours,” the story presents a clever new twist that is so satisfying and entertaining. Suffice it to say that parents, caregivers and kids will get a kick out of some fun role reversal in this charming and sweetly illustrated story.  •Reviewed by Ronna Mandel 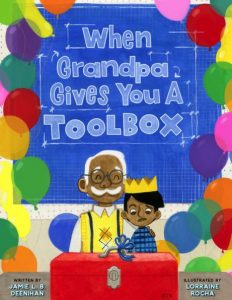 The birthday boy, with the golden crown on his head, is anxious to receive a special house for his dolls when Grandpa stops by. Lo and behold, he comes bearing a … TOOLBOX! When Grandpa Gives You a Toolbox, written by Jamie L.B. Deenihan and illustrated by Lorraine Rocha shows how an unexpected gift can actually become the one you will always remember.

Lorraine Rocha paints colorful illustrations of the grandpa, the boy and his little brown dog who remains by his side throughout the story. The reader is taken on a journey of love via bright illustrations depicting the boy patiently listening to grandpa’s stories. Deenihan’s prose are written as steps on how to handle a situation that you really don’t have much interest in, but you do out of love—a great lesson for young kids to learn. “Next, compliment Grandpa as he shows photos of all the projects he’s built since he was a kid.”

The boy listens to his grandpa until he runs out of stories, but the reader learns that the stories stay in his memory. We see the boy and his dog playing with his doll as a sad looking yellow bird sits at the bottom of a big tree. “It’ll be easy to forget about Grandpa’s toolbox. Until you meet someone in need and have an idea.” That’s when the boy realizes that maybe the toolbox can be useful. Then the reader is taken on a whole new journey showing the beautiful bond between grandfather and grandson.

At the end, the boy is not only able to get that special doll house, but he gets it by building it with Grandpa by his side. “You and Grandpa will work together measuring and sawing, drilling and hammering, gluing and painting, until finally, you’ve built exactly what you wanted.” This heartwarming story melts your heart deeper when Deenihan not only dedicates the story to her own father, but explains how her husband Ricky was diagnosed with brain cancer in 2015. In honor of Ricky, along with brain cancer patients and childhood cancer patients, a gray ribbon and gold ribbon have been included in the illustrations to raise awareness and show support for all those affected by cancer. •Reviewed by Ronda Einbinder

PAPA BRINGS ME THE WORLD 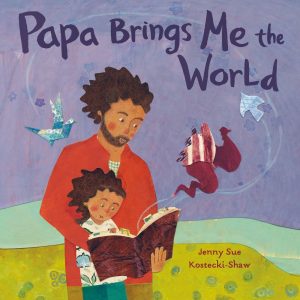 There is so much to enjoy when reading Papa Brings Me the World. It’s first and foremost a daughter’s love letter to her dad who is often gone for long periods of time due to his job as a photojournalist. “His pictures and stories are windows into magical worlds.” In addition to being about the parent/child relationship, it’s also a travel story with great glimpses into foreign countries and their cultures that the father in his career, and ultimately together with his daughter Lu, visit. I’ve also never read a picture book about a photojournalist so I think it’s wonderful and enriching to expose children to the world this way.

This book resonated with me not because one of my parents was a photojournalist, but because they loved to travel and instilled that love in me. I eventually studied abroad and then worked in the travel industry for nine years sharing my passion for world travel via educational seminars. The influence this story’s father had on his daughter was what hooked me from the start. “I was born to explore. Just like Papa.” I love how Kostecki-Shaw incorporated all the different places the father visited into journal entries and items collected along the way. Her art, a beautiful blend of acrylic, watercolors, salt, pencil, rubber stamps and collage made me want to linger on every page.

The biracial family in Papa Brings the World to Me is a loving, compassionate one. While the little girl’s thoughts revolve around her father’s often exotic trips and his anticipated return home from each one, Mama holds down the fort and provides support in a frequently one parent household. Any child who has a parent that is often away from home will relate to Lu’s dreams of spending time together with her papa either at home or on the road. The book will likely also spark wanderlust in even the youngest child when learning in the back matter about the variety of places Papa visits. This beautiful picture book is a celebration of the unique father daughter bond and one I recommend for all girl dads to read with their daughters.
•Reviewed by Ronna Mandel 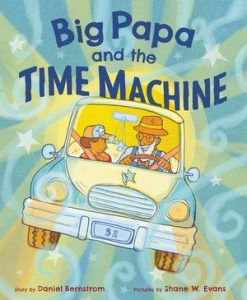 Soft pastel colors adorn the pages of this warm-hearted story of bravery throughout time as Big Papa takes his beloved grandson in a time machine (1950s automobile) telling him about times long ago in Big Papa and the Time Machine.

The beautiful artwork was the first thing to capture my attention, but it did not take long for the words to wrap around me as well. Bernstrom tells the story of his African American grandfather who fought through hardship only to come out brave, while reassuring the boy who is fearful about going off to school for the first time.

The kind grandfather with the long gray beard, orange hat, red bow tie and blue overalls kicks off the time travel going back first to Little Rock, Arkansas circa 1952. Here he is a young man hugging his own Mama ever so tightly. The grandson believes his grandfather is never scared. “No been scared lots of times,” Big Papa said. “But sometimes you gotta lose the life you have if you ever gonna find the love you want. That’s called being brave.”

Bernstrom takes readers through a series of experiences in the past: meeting Nana at a dance; his own daughter walking away from raising the boy and working hard labor, but he always ends with the same beautiful words “that’s called being brave.”

This is a story that I could reread over and over, and what a poignant story at this time in history. We are educated on the hardships this family overcame, but in the end they survived it all through love, perseverance and, of course, being brave. Bravo to Bernstrom for his words that transported me to Arkansas 1941 and 1952; Chicago 1955, 1957, and the year the grandson was placed in the grandfather’s care in 1986.

In the Author’s Note, Bernstrom explains the background to this story and how he wasn’t raised knowing his biological grandfather, but when they met his grandfather had stories upon stories to tell. Evans asks, “what is courage?” and explains that with every line of art there is a story just like there is a story in every word. I felt it in both the words and the art. A beautiful story definitely worth sharing with young readers.
•Reviewed by Ronda Einbinder. 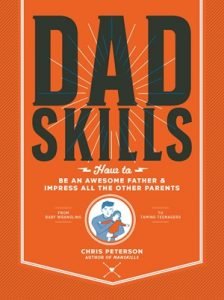 DADSKILLS: How to Be an Awesome Father and Impress
All the Other Parents – From Baby Wrangling – to Taming Teenagers
Written by Chris Peterson
(Cool Springs Press; $17.99, Paperback)

Billed as a manual for new fathers, Dadskills‘ subtitle immediately clues you in to the light-hearted read covering child rearing, from their arrival at home to their eventual departure. The six chapters (which include spot illustrations) include “Baby Wrangling,” “Dealing With Toddlers,” “The Single Digit Challenge,” “Managing the Tweens,” “Taming Teens,” and “Empty Nesting (or Not).”

Does father really know best? That’s what author Peterson is aiming for with his “We got this” fix-it guy approach to equipping men with the important skills they’ll need to be a first-rate and rad dad. “You’ll find here a breakdown on all the essentials so that you can feel a little more like ‘I’m witnessing a miracle’ and a little less like ‘What the hell is happening?'”

In the first chapter I was pleasantly surprised to find colic was addressed because, while it’s awfully uncomfortable for baby, it can also be exhausting and trying for parents who feel helpless to make their little one feel better. When our daughter had colic, it was my husband with his secure football hold that I could count on to quell her pain. In Chapter 3 dads are reminded to “enjoy this prehormonal phase of life.” And, as a book reviewer, how could I not love a section that emphasizes encouraging a young reader with tips such as “Make it a nightly habit,” integrate books into your home life, and read beyond books, for example, by playing games that require game card reading in order to practice skills and pronunciation.

Every chapter is full of invaluable information that will give dads the tools they need to solo or co-parent and make them smile while getting the inside scoop in a book created with their needs in mind. Peterson’s voice throughout the book is like that of a close friend’s. Dadskills will leave new dads feeling prepared for and less stressed about fatherhood. With its perfectly balanced blend of advice and wit, this fathering book for a new generation of dads will make a great gift for Father’s Day.
•Reviewed by Ronna Mandel