THE BEST HALLOWEEN PICTURE BOOKS OF 2017 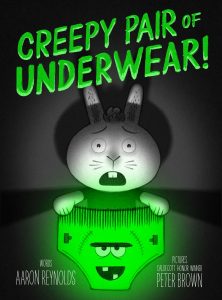 Two things are clear from the start of this book: Jasper needs some underwear and, he’s not a little bunny anymore. He persuades his mother to buy a pair of underwear advertised as, “So creepy! So comfy!” That night, Jasper wears them to bed and the trouble begins.

In Aaron Reynolds’s 48-page picture book, Jasper soon decides that, even though he’s a big rabbit, the underwear’s “ghoulish, greenish glow” and magical powers are a bit much. Instead of bothering his parents or confessing why he’s jumpy, he finds ways to rid himself of the dreaded underwear. When they keep coming back, Jasper self-reliant attitude conflicts with his fears

Peter Brown brilliantly conveys the somber mood in black and white images, offsetting the unusual underwear in neon green. When Jasper finally entombs his problem, Brown rewards the reader with a two-page wordless spread of darkness followed by Jasper’s eyes, surprised and oversized at the absolute blackness he has achieved.

The text’s refrain cleverly changes along with Jasper’s perspective. Acting like the big rabbit he professes to be, Jasper solves his own dilemma. Reader and rabbit receive an illuminating conclusion.

The team of Reynolds and Brown scored Caldecott honors with their previous book, Creepy Carrots! Featuring the same rabbit and a humorous plot, Creepy Pair of Underwear! will haunt you to read it again. 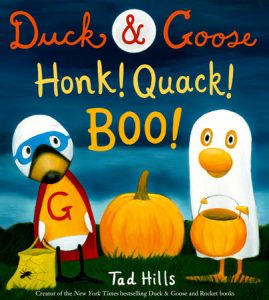 Duck & Goose, Honk! Quack! Boo! brings us a Halloween adventure with this pair of favorite feathered friends Duck and Goose. This 40-page picture book will engage young children who, during this time of year, are eager to ask, What are you going to be for Halloween?

Goose, unclear on the concept states he’s going to be himself, of course, because “it’s important to always be yourself.” And, rightly so. But, fun soon follows when their friend, Thistle, appears and boldly states that she’s not telling them about her costume. It’s a secret. Then she cautions them to beware of the swamp monster tomorrow when they go trick-or-treating.

Of course, the mention of that ghoul haunts Goose that night and the next when he sets out, ready to collect candy. All seems okay until he’s told the swamp monster is looking for them!

In this book, Tad Hills continues the beloved series wherein emotions are explored in a gentle manner. Throughout, his illustrations, are expressive, capturing Goose’s trepidation. Particularly well depicted is the forest trick-or-treating scene—such fun to see how animals celebrate.

Children can relate to the slight apprehension surrounding Halloween that is paired with the excitement of get dressed up and, in the end, sorting their bounty. 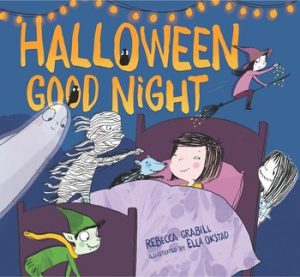 Halloween Good Night, a rhyming 32-page picture book, counts from one to ten using charmingly ghoulish families. Rebecca Grabill employs some standard spooky Halloween creatures such as vampires, zombies, and werewolves. Refreshing additions include wood imps, globsters, and boggarts. “Lurking in the swampland, lanterns glowing like the sun, sits a massive mama globster and her bitty globby one.”

The captivating cadence of the lines is spiked with clues enticing the reader to question where everyone is going. Soon, we find ghosts “sail through your door” and boggies wait in your closest for “your bedtime once again.” This removal of the so-called fourth wall makes the audience part the story.

A not-at-all-spooky conclusion is followed by a quick countdown from ten to one. Because the number sequences are handled with interest even older kids will engage with this “counting book”—there is much more to the story.

Halloween Good Night shows us that monsters can be playthings like dolls or stuffed animals. Instead of fright, they bring delight.

It’s summer, and Duck is eager to explore. Goose, however, is reluctant to leave their perfect little meadow with its tree stump, hollow log, stream, lily pond, and shady thicket.

“A TRIP? A trip sounds far away. I like close…An adventure? That sounds scary,” Goose honks.

But Duck is determined, and Goose grumpily follows him on their hike. When they arrive at the beach, Duck gets more than he bargained for. The waves are loud, the sand is hot, the ocean is big, and the beach dwellers are different. The beach isn’t what Duck expected, but it isn’t what Goose expected either, and, suddenly, he’s up for the adventure!

Goose stared at the vast stretch of sky, sand, and sea. “Isn’t it magnificent?” he said.

“Oh dear, the beach has SO MUCH water,” quacked Duck. “I feel tiny.”

“Have you ever seen SO MUCH sand?” honked Goose.

Duck & Goose Go to the Beach is a story of many levels. It presents the idea of having an adventure and doing something new. It deals with facing fears and being open to changing your mind. It’s a fun summer read. Most of all, it is charming and humorous. Duck and Goose are adorable characters. They are who they are, and that trait is so appealing to young readers (and their parents).

The oil paint artwork is almost too cute. The images of the feathered friends running down the hill and peeking over the sand dune are picture perfect. The artwork adds to the massive appeal of the book.

Whether they’re in a meadow, at the beach, or in your home, your kids will delight in Duck and Goose.