THE BALLAD OF SONGBIRDS AND SNAKES: 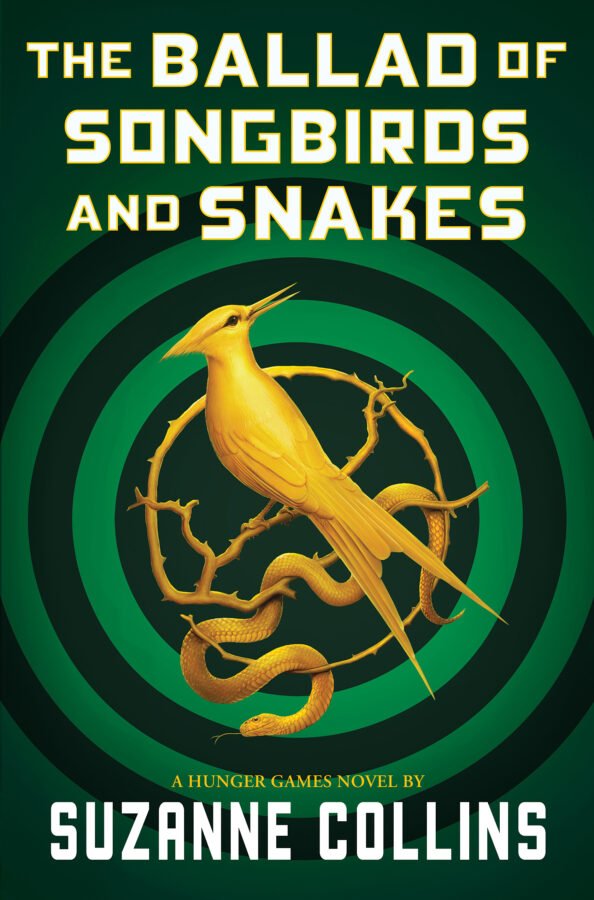 Coriolanus Snow: Anyone who has read or seen The Hunger Games knows this man. Yet, who was he before becoming the evil overload of Panem? In The Ballad of Songbirds and Snakes, we meet Snow at age eighteen. His cousin, Tigris—yes, that Tigris—and his Grandma’am are all he’s got. They haven’t had enough food in ages and aren’t far from losing their once-luxurious housing. Facing an uncertain future upon graduation, Snow must achieve personal recognition at school, in hopes of being awarded funds toward University tuition.

It’s reaping day again and this year the kids from Snow’s class are assigned tributes to mentor as their final project. His District 12 girl is quite a letdown at first. Yet, once she’s in the spotlight, Lucy Gray proves to be a charmer and that may get her through for a while. Snow, at first, sees Gray’s performance in the Games merely as an assignment to score highly on but, soon, a complex relationship builds.

Suzanne Collins reveals the surprising origin of the Games. The book, as expected, is fast-paced with many plot twists. Snow and his classmates who are also assigned tributes are drilled by Dr. Gaul, the wonderfully creepy Head Gamemaker (who may just lock you in a cage in her lab for fun). She prods kids with questions such as what the Capitol’s strategy should be now that the war is over but may never truly never be won. When questioned whether there is a point to the neon colors of her snakes, she answers, “There is a point to everything or nothing at all, depending on your worldview.” These moments with Gaul reveal the book’s deeper messages about power, whether wielded with a weapon or a rose.

I’m a fan of the trilogy and very much enjoyed this glimpse into what happened decades before the girl on fire burst onto the scene and the screen. I would be happy to continue along with Snow, filling the gap, until the day he sees Katniss Everdeen become District 12’s first volunteer for the 74th Annual Hunger Games. The folk tune, “The Hanging Tree,” reaches across the years, uniting the stories.

Pride Month Book Review – No Way, They Were Gay?

NO WAY, THEY WERE GAY?: Hidden Lives and Secret Loves by Lee Wind (Zest Books;…