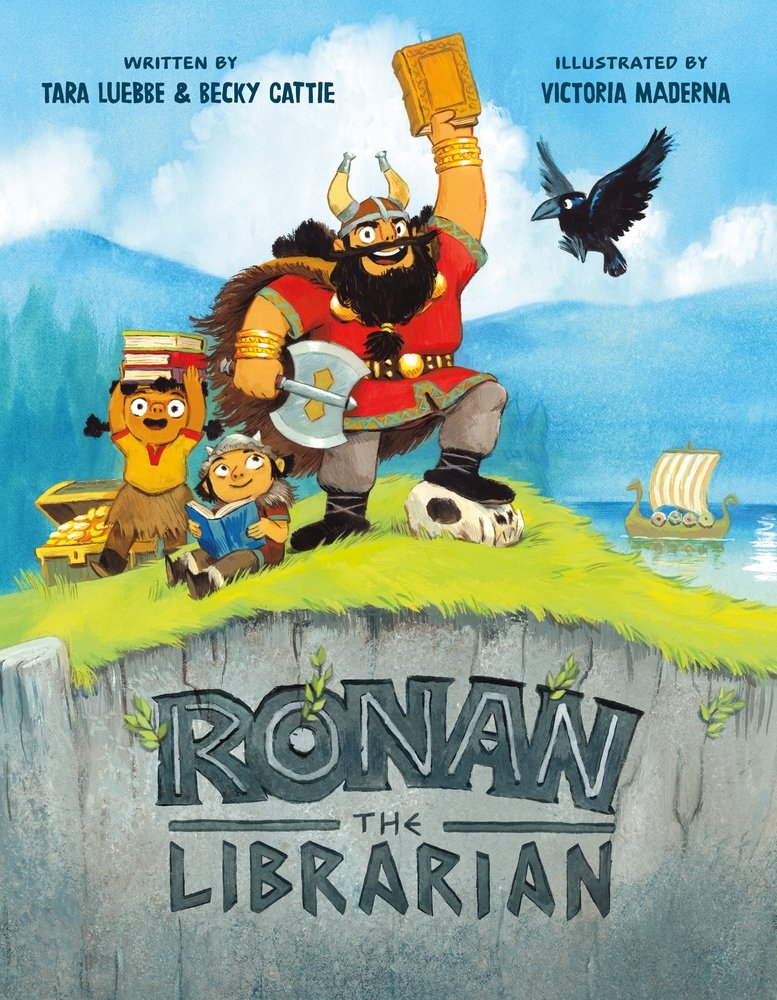 What do you get when you mix books with a barbarian? You get the delightfully disarming Ronan the Librarian by Tara Luebbe and Becky Cattie with art by Victoria Maderna.

When we first meet Ronan, the barbarian leader, he’s a typical marauder, pillaging with his cohorts and pretty much content. His usual raids involve bringing back jewels and gold, that is until his latest plundering reveals a chest full of books. Not exactly what was in the cards. While at first Ronan considers the haul useless—“Kindling? Origami? Toilet paper?”—it doesn’t take long for him to get pulled in by a picture and hooked on the book. He reads late into the night, oversleeping in fact. From that moment on, Ronan was a changed marauder.


Wherever Ronan travels to invade, raid and then trade, his mind is always focused on the current book he was devouring, eager to return home to it at day’s end. As the leader, Ronan shifts the pillaging priority from taking baubles to books and his collection grows and grows. It becomes so huge he needs a library to contain it. Much to Ronan’s disappointment, his partners in pillage show no interest in reading. “Barbarians do not read books.”

Determined to whet their literary appetites, Ronan decides to read a mythical tale aloud to his community. Yet everyone appears to carry on with their work, leaving the barbarian bibliophile convinced his story has not made an impact. However, when he later discovers the library has been invaded, not by pillagers, but by curious villagers, Ronan could not be happier. “It turns out, barbarians do read books.” Ronan lives happily ever after only now he can add librarian to his skill set. With stories filling their minds, everyone’s lives grow richer because we all know what treasures can be found inside the pages of a book.

I love how Luebbe and Cattie have taken the most unlikely of characters to ever want to read and turned that on its head. Who can’t fall for a big bearded barbarian smitten by the love of reading? Kids will love saying some of the goofy barbarian expressions like “Uff da!” They’ll also find adorable characters (I like Helgi), wonderful rhythm, and repetition that will make this a much requested read. In addition to enjoying every page, kids should make sure to revisit the art. Maderna’s added some fun details in her lively illustrations like a goat eating the paper from the book haul and again in the library munching on a book, a dinosaur skeleton under the floorboards in Ronan’s home, a library sandwich board that reads “Come Read! Free Mead,” and a library bulletin board with some very funny “Rules and Advice” notices. Parents, teachers and librarians will enjoy sharing Ronan the Librarian, a book that subtly and cleverly extols the virtues of reading. This witty picture book begs to be read at library story times and will make even the most reluctant of readers root for Ronan, even if you may think he could use a shave.


Learn more about the authors at www.becktyarabooks.com