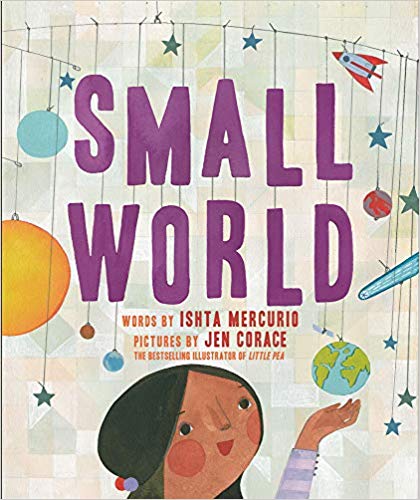 When Nanda is born, the whole of her world is the circle of her mother’s arms, but as she grows the world grows too. Small World, the debut picture book by writer Ishta Mercurio, takes the reader on a journey into Nanda’s world through shapes and structures, with out-of-this world illustrations by Jen Corace that are STEM themed “geometric meditations on wonder.”

This picture book’s colorful and stunning art, created with the matte finish of gouache, ink and pencil, introduces the young reader to the circle of Nanda’s loving South Asian family. Mom is seated dressed in a beautiful sari and scarf, while the siblings sit around the table with Nanda on her father’s lap. The round plates and faces are the first introduction to the various geometric shapes introduced to the reader. Page after page brings us into Nanda’s growing life from “slide and swings and whirligigs and tumbles through grass” as she plays with her playmates, until ultimately she goes off to college on her own, “But as she grew, the world grew, too.”

The deep blue sea outlines the town of square houses, boxes of farmland and round shaped trees, while our main character is seen soaring solo in a small airplane from above. “Nanda got bigger and bigger and BIGGER. But as she grew, the world grew, too.”

Soon new faces are seen looking up towards the sky as a space shuttle blasts off and we discover that Nanda is as high above the sky as one can be—Nanda has grown up to become an astronaut. Her “feet have touched foreign soil.” Wearing a space helmet surrounded by “A sea of stars, moonless and deep, distant suns twinkling … Marbled planets orbiting, speck-small in the distant night …”

Small World offers young readers the opportunity to think big and expand their horizons. They can see that Earth’s size varies based on perspective—large under little feet, but when you go into space, it’s easier to see how small our planet is compared to the size of the universe. Mercurio says, “children can see the Earth being as big and small at the same time in the same way that you are big and small at the same time.” Just like Nanda, if you stick with your ideas as you grow older, you will see more of our world and maybe even more of the universe.

In an Author’s Note, the reader is asked where they would go if they were Nanda and what places they have visited. Small World encourages young children to reach for the stars and to know that anything is possible. Beautifully written and illustrated, it’s both a positive and encouraging read with its “You can do this” message. Mercurio actually named her main character, Nanda, joy in Hindu Sanskrit, in honor of five women photographed celebrating at the Indian Space Research Organization after they had helped put a satellite into orbit around Mars.

Read a review of another STEM picture book here.