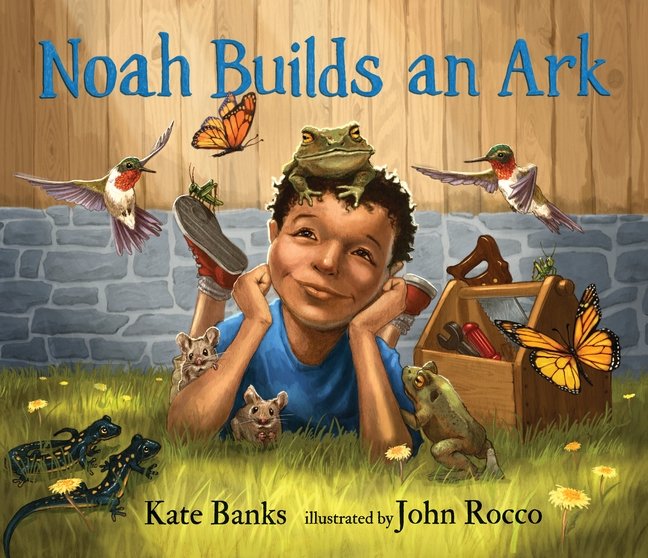 A gentle retelling of the familiar Biblical story, Noah Builds an Ark by Kate Banks with art by John Rocco illustrates the giving and receiving of tender care in the midst of a major storm.

A slight tension fills the air as dark clouds approach Noah’s house. In the backyard, restless salamanders slither “to and fro” and beetles and mice try to take shelter. Getting his tools from the yard, Noah’s father makes a thought-provoking comment: “It’s going to be a beauty.” What is? The preparation, the storm, the aftermath?

Just as Noah’s parents work hard to prepare for the storm, Noah, similarly, takes thorough care of his garden friends’ needs. For shelter, he builds an ark out of his wagon and fills the space with all the comforts of home: food, furniture, water, and light from a flashlight. Whatever his parents provide for him and his sister, Noah, in turn, provides for his critters.

Rocco’s detailed pencil and watercolor illustrations emphasize this give and take motion. On the left side of the page, we readers see the actions his parents take and on the right we see Noah mimicking that action. When the storm arrives, the illustrations once again draw similarities between the two. Both groups huddle, share food, and pass the time with calming activities. One double-page spread is particularly poignant as it draws our attention to the slats of wood—wood that boards Noah’s window and wood that houses in his garden friends. It’s a powerful image of protection and community despite the raging rain “splash[ing] down like silver swords thrown from heaven.” Banks’ imagery captures, too, the beauty and danger of their situation.

When the clouds suddenly retreat and the “sun turn[s] its light back on,” Noah is treated to a wide and stunning rainbow. A sign of the covenant between God and the earth in the original story, the rainbow here represents a symbol of peace and restoration. Two by two the creatures leave the ark and resume their roles in Noah’s garden.

So what was “going to be a beauty” after all? Dedication in caring for one another, the sense of community during troubled times, and the healing qualities of the natural world are all beautiful themes in this story. For animal and nature lovers, for those familiar and new to Noah’s Ark, for those needing a quiet bedtime story and a suspenseful adventure, Noah Builds an Ark is for any child who enjoys a timeless tale.