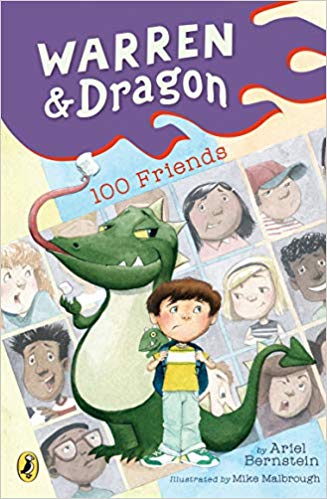 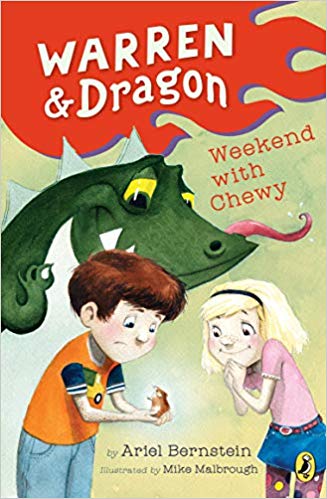 WHO AND WHAT I LOVE ABOUT THIS NEW CHAPTER BOOK SERIES:

Warren Nesbitt, a seven-year-old boy.
The realistic relationship (and dialogue) between siblings.
Dragon, a 122-year-old dragon who is real and only visible to Warren.
Dragon, the stuffed animal everyone thinks is what Warren is always referring to!
Warren’s twin sister, Ellie and her quick wit and snide comments.
Friendly next-door neighbors, Nia and Paula Berry, are a gay African-American couple with three children.
Michael Berry, first-grader and soon-to-be Warren’s good friend.
Alison Cohen, Warren’s classmate in Mrs. Tierney’s class.
The descriptions of lunchtime in Book 1.
The Nesbitt family need to move because Mom, an engineer, has been offered a job in a new city.
All of Alison Cohen’s pets in Book 2 and a burgeoning friendship.
Warren’s fear of Dragon eating Chewy in Book 2.

In Warren & Dragon: 100 Friends (Book 1), the Nesbitt family move to Eddington. While his sister Ellie is not happy about having to leave all her friends, narrator Warren has his pal Dragon and doesn’t care much. After some goading from his sister, Warren decides to set a goal of making 100 new friends despite feeling uncomfortable doing it. However, there’s no way he’ll let Ellie get the better of him when she proclaims, “There’s no way you’re going to make more friends than me!” Luckily Dragon says he knows how to make friends as long as it involves massive amounts of marshmallows. When Warren’s first day of school isn’t going as well as he’d like, things go further south when Dragon goes missing. Soon he is recovered safe and sound, even content, helping Warren to realize that the experience has taught him how to make a new friend. The book works on several levels, one being the friendship aspect and another being a “new school” story. The sibling, family, and neighbor dynamics also add to the pleasure of reading this first installment in what promises to be a popular series.

Witty dialogue from all the main characters makes for fast flowing, always funny ten chapters in this very entertaining read. Initially I read it quickly, eager to find out how Warren fared in his new school. Then I read it more slowly a second time to see how Bernstein pulled me into her well-crafted tale. Kids are going to want to read every book in the series which is great for two reasons: 1) It’s engaging and relatable and 2) Book 2 is available and Book 3 in the series, Warren & Dragon: Scary Sleepover, comes out in 2019.

Warren & Dragon: Weekend With Chewy (Book 2) had me grinning enormously through all fourteen chapters, vicariously living through the experience of taking a class pet home since I never had the opportunity. In fact I’m not even sure we had class pets when I went to school. Anyway, once again Bernstein’s created a clever premise for this story. Warren gets chosen to take class hamster, Chewy, home for the weekend. He not only has to care for him, but he also has to write a report about it. The catch is, Warren already has plans and they’re exciting. He and his friend Michael from next door are going to construct a chute between their bedroom windows “to trade snacks after bedtime.” Warren convinces Dragon to hamster-sit Chewy so he can focus his energies on ramp building. At the same time, Warren’s twin sister Ellie wants a pet of her own and thinks that, in order for her parents to agree, she must demonstrate responsible behavior. Classmate Alison Cohen gets pulled into the picture when Warren wonders how to write up the report. Before long, everyone’s attention is focused elsewhere and that’s when Chewy goes AWOL. Can the kids find the missing rodent to ensure a happy ending? Things may be looking up, literally, when Warren at last lays eyes on Chewy at his bedroom window ready to take a ride on the “chute-of-doom.”

Malbrough’s charming illustrations, dotted throughout both books, are a welcome addition for children just transitioning to chapter books. These two chapter books confirm that Bernstein knows what type of story will appeal to young readers. I’m looking forward to more of Warren and Dragon’s adventures because anything goes as long as there are marshmallows in the mix!