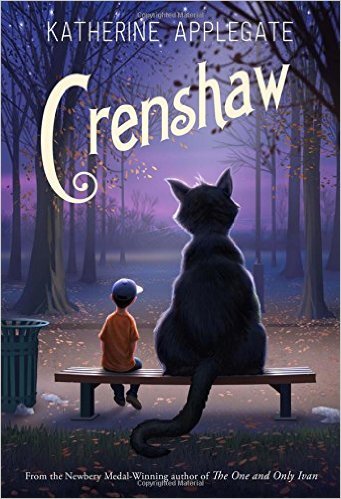 Oh, this marvelous cover. The huge cat, the small boy, the dreamy purple all around them, and the feeling like they have known each other for a long time are all reasons that Crenshaw just pulled me in when I first saw it. Of course I knew that Katherine Applegate was going to write a terrific book because she wrote the Newbery Award winner, The One and Only Ivan. So, I just trust her to write something wonderful and she did!

Jackson, known to the family as Jacks, is a person who likes facts. In fact, he loves them. So when Crenshaw shows up one day Jackson is amazed and more than slightly freaked out. Crenshaw was Jackson’s imaginary friend when Jackson was a little boy. Jackson knows better than to believe in imaginary friends. However, now Jackson has a real problem because even though he wishes Crenshaw would just go away, it’s not going to happen. Crenshaw is going to stay for a while. It’s good that he does because Jackson is going to need his old friend again.

Jackson and his family aren’t doing well financially. Jackson’s family is going to have to make a decision about how they are going to cope with job losses and disabilities. It isn’t going to be easy to be able to make any sort of decision at all when there is hardly any money. Jackson and his family have had to live in the family minivan before, and Jackson is worried that they might have to do that again. While everything around Jackson seems out of control, Crenshaw is there. He’s a giant, imaginary cat and I’m so glad he is there for Jackson. Crenshaw guides Jackson. Crenshaw helps Jackson to find a way to tell a hard truth. Crenshaw likes purple jellybeans. Crenshaw is a cat that can ride a surfboard! In short, Crenshaw is a great friend.

There’s just tons to love about this book. It’s magical, full of facts (that’s what Jackson likes), full of imagination (that’s pretty much what Crenshaw is made from), and it has this amazing warmth to it. Jackson’s family may have financial troubles, but there is no deficit of love in this family. They love each other to the moon and back again. Crenshaw received well-deserved starred reviews from Publisher’s Weekly, School Library Journal, and Horn Book. I’ll add another of my own. ★ Highly recommended!

Read an excerpt by clicking here.