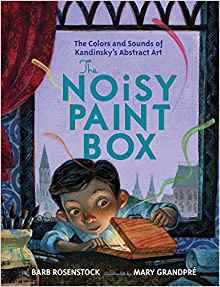 The Noisy Paintbox: The Colors and Sounds of Kandinsky’s Abstract Art by Barb Rosenstock with illustrations by Mary GrandPré (Alfred A. Knopf Books for Young Readers, $17.99. Ages 4-8) is a wonderfully inspiring historical biographical fiction picture book.

Young Vasya (or Vasily) led a staid, privileged life in 19th century Moscow, that is until his aunt presented him with “a small wooden paint box.”

“Every proper Russian boy should appreciate art,” said Auntie. She showed Vasya the correct way to mix colors on the paint-box palette.

Vasya felt the colors spoke to him. They jumped out of the box and made sounds that only he heard, sounds that could be translated onto canvas. Fortunately, Vasya’s Auntie recommended his parents put him into art class. For the Russian elite, however, art was no substitute for an acceptable career like law which Vasya pursued as was expected of him. It was only after attending an opera that it was clear to Vasya that music and the emotions it evoked inside him could be expressed through art. His old noisy paint box that had been brought to life by the orchestra could not be ignored.

After quitting his job teaching law, Vasya moved from Moscow to Munich to study from great artists of the time. Everyone wanted this talented man to adhere to more traditional styles of painting, but Vasya and his artist friends could not conform. “Art should make you feel,” Vasya told them, “Like music.” Kandinsky’s influential new abstract art evolved from the emotions he experienced from color, music and the world around him. Though at first not easily understood, abstract art “sparked a revolution in the art world.”

Fans of Mary GrandPré will once again be treated to beautiful artwork that, like its subject, is never boring. As an artist bringing another artist’s work to life, GrandPré’s illustrations perfectly convey the emotion and vibrancy of Kandinsky’s creations.

In Rosenstock’s Author’s Note in the back matter, she goes into more detail about Kandinsky’s emergence as an artist and the speculation he may have had a genetic condition known as synesthesia where one sense (in his case listening to music) triggers a different sense. Rosenstock explains that individuals with synesthesia hear colors, see music, taste words, or smell numbers. –