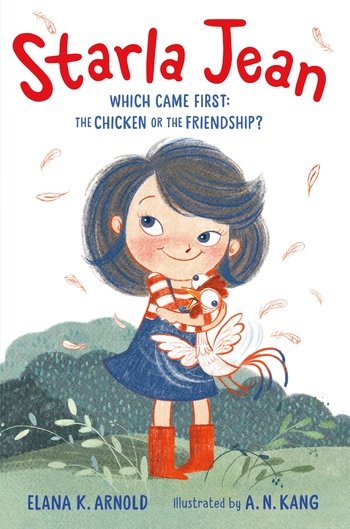 Which Came First: The Chicken or the Friendship?

Illustrated by A. N. Kang

Starla Jean – Which Came First: The Chicken or the Friendship? is the first in a new early chapter book series by author Elana K. Arnold. Divided into four chapters and written in first-person, the book begins with Starla Jean and her father going to the park where Starla Jean happens upon a chicken. Her father tells her, “If you can catch it, you can keep it” not believing that she actually will. But Starla Jean can do anything she sets her mind to! So, of course, she does catch the chicken and they take it home. She names her Opal Egg, so the chicken will feel more comfortable and know they don’t want to eat her “because you don’t give a name to your dinner.” Back home Mom is not too pleased although baby sister Willa eventually benefits from Opal Egg.

However, the big question remains: if Starla Jean found a chicken, does that mean someone lost a chicken? The family puts up ‘Found’ signs to locate her owner but when the chicken’s owner does show up, does that mean Starla Jean will have to say goodbye to her new friend?

A. N. Kang’s illustrations are crisp and plentiful on every page, encouraging early readers who are attempting to read this book on their own. Humor is also abundant in each picture, whether it’s showing a chicken taking a dust bath or Opal Egg wearing one of Willa’s diapers, an idea Starla Jean has to satisfy her mother’s complaint against her.