How They Choked:
Failures, Flops and Flaws of the Awfully Famous
by Georgia Bragg
with illustrations by Kevin O’Malley
(Walker Books for Young Readers, $17.99, Ages 10-14)

is reviewed today by Ronna Mandel. 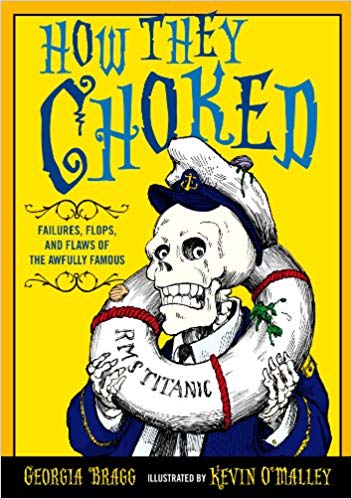 Your fifth through eighth grader is going to thank you for getting them this book to read over the summer. Bragg put pen to paper (okay may fingers to keyboard) and tongue in cheek when she wrote How They Choked, an entertaining and educational nonfiction book about how successful people from the 1400s through the 1900s botched up big time. If that’s not a great way to start off summer vacation, I don’t know what is?

When kids see O’Malley’s hysterical illustrations, it will be obvious the artist had as much of a blast as Bragg did bringing out all the humor and irony surrounding these often over-achieving historical figures. For example, when the greedy, neurotic and power hungry (to say the least) Queen Isabella started the Inquisition, O’Malley drew two signs on the page: “Heretics Out!” and another one “Leave Your Stuff.” From Marco Polo and Queen Isabella of Spain, to the Aztecs and Anne Boleyn, from Benedict Arnold and Susan B. Anthony to Vincent Van Gogh and Amelia Earhart and lots more in between, there are characters galore to learn about, laugh about and yes, I admit it, occasionally feel sorry for.

You may recall Bragg as being the author of How They Croaked, so it’s only fitting that she should carry on this riotous tradition, an engaging look at history full of chapter heading hooks to pull in even the most reluctant of readers – Dressed to Kill (about Custer) or Least Likely To Succeed (about Van Gogh). Her gift is being able to talk to the reader in language they’ll understand, language that is not dated, but is at times quite daring. Frankly that’s what made How They Choked all the more appealing to me and I’m confident your kids will feel the same way. Whether she’s dishing the dirt on Marco Polo’s dad who offered his son to royal and notorious Kublai Khan or Montezuma acting like a “real living god” and not seeing the writing on the stone once Cortes entered the picture, the historical anecdotes Bragg’s included make for a multitude of “Wow, really!?” moments.

I got such a kick out of the section on Anne Boleyn called Till Beheading Do Us Part. This social climbing lady-in-waiting should have resisted Henry VIII’s advances, but no, she had to outdo her older sister, Mary. When Henry grew tired of Mary and moved onto the younger sibling, it became impossible for Anne to refuse, what with jewels bestowed upon her and the temptation of being Queen. Never once though did she imagine she’d be losing her head over the King. And Benedict Arnold? I knew his name was synonymous with traitor, but I had no idea how absolutely despicable he was. Forgiven by George Washington not once, not twice, but three times, Arnold was an arrogant turncoat who “made more money than any other American officer in the American Revolution.”

The mistakes of today’s rulers and politicians pale in comparison to many of the excellent examples in How They Choked making this a must-read book for aspiring political science majors and anyone even slightly interested in history. The pages are filled with tales of larger than life individuals being knocked down to size so as the warning in the beginning of the book says: “If you only want to see people at their best, this book isn’t for you.”

COOKBOOKS FOR ALL! A Roundup of Recommended Reads        …