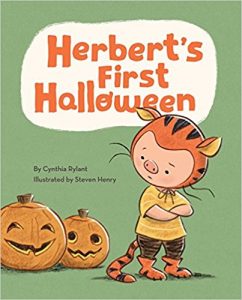 I’ll never forget my son’s first Halloweens. He was dressed up as pirate and ready to join the ranks with a seasoned pro, his older sister. But before we stepped foot out of the front door, a trick-or-treating ghost rang the doorbell. When we opened the door to offer candy, my son dashed behind me and refused to leave the house. Even the prospect of candy couldn’t get him to budge. I’ll hand it to the father in Herbert’s First Halloween, he has a gentle way about him to help ease his little one’s apprehension. As the story unfolds, “Herbert was not sure about Halloween.” Readers can see the reluctance in his eyes as Henry’s illustrations so warmly depict. At the same time, the passion and excitement about the holiday are written all over Herbert’s father’s face. He’s determined to make this first Halloween a special one for his son, even sharing photos of when he was young dressed up like a cowboy. Soon, Herbert’s more engaged, asking questions about costumes and his dad is all too happy to accommodate his son’s desire to be a tiger. On Halloween the pair encounter neighborhood kids in what is perhaps my favorite spread in the book. There’s something magical about that first time taking to the streets under the glow of street lamps, candy bucket in had, trying to figure out who is who behind the masks and zany outfits. Though it’s a pretty simple story, it’s totally age appropriate. There’s a genuine feel-good quality about Rylant’s prose when coupled with the old-fashioned picture book style off-white paper, choice of font and Henry’s charming artwork. When seeking a book to help lessen a child’s fear of Halloween, Herbert’s First Halloween, is a terrific tale to turn to. 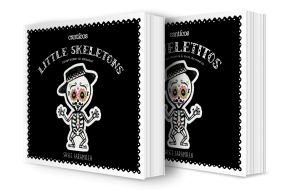 Whether you’re interested in buying this accordion style bilingual board book for Halloween or Day of the Dead, it won’t matter to your kids. They’ll love the artwork, the book’s layout and reversibility from English to Spanish and vice versa, the interactive clock face and the rhythm of the tune which when translated from Spanish is called “The Skeletons Come Out of the Tomb.” The origins of this song remain a mystery, but that won’t stop parents from finding a fun beat to share with youngsters when reading out loud. The book comes packaged in a sturdy box and while all the interior artwork is black and white, there’s a touch of color on both the box and book covers. Count up to 12 with Esqueletitos and teach the time too with the help of all the adorable skeletons. In addition to the two-books-in-one feature, there’s also a free sing-along app to accompany the book.

In a Dark, Dark Room And Other Scary Stories: 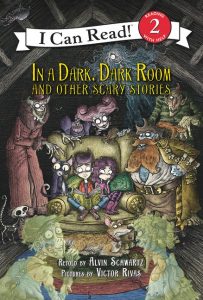 This hard cover book is labeled a high interest story for developing readers. It instantly took me back to my days at camp where scary stories were always told around a crackling fire and then afterwards I was the only one who couldn’t fall asleep. Why do counselors do that? Anyway, depending on your child’s fear level, you may want to consider reading this in the daytime. There are some classic tales that I recognized and got such a kick out of reading again, especially as engagingly recounted by Schwartz and illustrated vividly by Rivas. For example, The Green Ribbon is the tale of a charming girl whose head was attached to her body with said ribbon which is why she never removed it until her deathbed. Perhaps the most chilling of the seven poems and stories is The Night it Rained. Here’s a story many adults may recall about a driver picking up a rain soaked young boy and loaning him his sweater only to discover the next day that the boy was a ghost. There’s also a foreword and back matter about the author, the illustrator and where the stories originated. 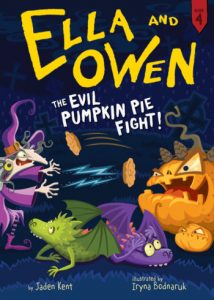 Ella and Owen are twin dragons who, while seeking adventure, always end up in some kind of mess. In this, the fourth book in the series, the siblings end up being out at night while trying to escape some trolls. A light in the distance, however, doesn’t end up leading them to safety. Instead it turns out to be from candles belonging to the nasty Pumpkin King. Exasperated, the siblings just want to find a way out of the Terror Swamp and so the orange body-less guy offers them a deal. If they can recover his body from the local witch, he’ll give them an escape map. Jaden Kent, a writing team of two authors, has the dragons encounter obstacle after obstacle while peppering each of the nine brief chapters with humor and language first and second graders will enjoy. I mean what kid doesn’t like the idea of a pumpkin pie fight? Bodnaruk’s spiced up this pumpkin themed story with plenty of black and white illustrations to entertain young readers and help them feel accomplished as they fly through this book. There’s a surprise love angle to this particular volume providing LOL moments with dialogue such as, “Okay. This just got really weird,” that kids will relate to. A bonus is a sneak peak at book #5 Ella and Owen: The Great Troll Quest which I’m sure will be as engaging as this one.
Find more Ella and Owen books here. 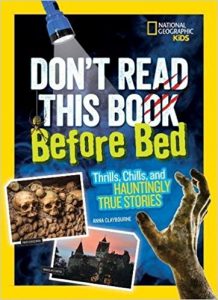 Written by Anna Claybourne
(National Geographic Kids; $14.99, Ages 10 and up)

If you want to get older kids scared, this 144 page book should do the trick. After deciding I wasn’t brave enough to read the stories rated over a five in the Fright-O-Meter provided, I braced myself, chicken that I am, and made my selections using that number as my guide. For a tween who gets spooked easily, suggest something else, but if they’re the sort who truly finds the creepy stuff cool, the two-paged table of contents can provide a tantalizing tease with titles like The Real Life Dracula, Telepathic Twins, Island of the Dolls and The Green Children of Woolpit. NatGeoKids.com does these almanac-style paperback books better than anyone else with their great images, creepy fonts and fascinating factoids that your kids will want to share with friends. Pages six and seven explain how to use the book which was where I learned about, and was grateful for, the Fright-O-Meter. On top of the visual fright fest and the accompanying tales, there are six quizzes scattered throughout the book, a great way for kids to catch their breath which they may not have realized they were holding. My recommendation: bring this book to a Halloween party. Why be the only one awake at night? Seriously though, this one’s a year round treat.

Read part one of this Halloween roundup here.