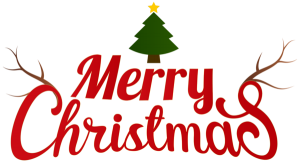 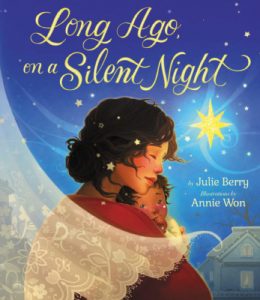 Written by Printz Honor recipient Julie Berry and illustrated by Annie Won, Long Ago, on a Silent Night connects the Biblical story of the birth of Christ with the birth of a mother’s newborn babe. Ancient and modern times meet to express the promise of peace, joy, and hope the Christmas season brings.

Won’s glowing, airy illustrations produce a dreamlike effect. Interchanging pages of light and dark color highlight the story’s juxtaposing themes: extreme joy and the deep mystery of the miracle of birth. Just as a “piece of heaven fell to earth” when God became flesh “at that sacred birth,”the mother feels her boy “came straight from heaven, too” from “the moment” she held him. Berry’s tender language, told in elegant verse form, captures the holiness of the relationship between mother and child, and in a broader sense, humankind’s relationship with the Christ Child. Though He had the power to “one day calm a tempest wild,” Jesus instead chose to save the world through His “gentleness” and humility. The birth of the baby is a reminder of the ripple effect of God’s loving kindness throughout the generations.

A great addition to your Christmas picture book collection, Long Ago, on a Silent Night highlights the relevance of the Nativity story to our modern times. 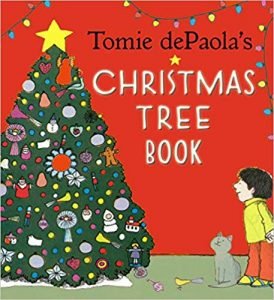 Beloved children’s author/illustrator Tomie dePaola offers us a picture book full of fun facts about the most widespread of all Christmas traditions: the Christmas tree.

In its second edition, Tomie dePaola’s Christmas Tree Book begins with a family visiting a Christmas tree farm to pick out their own tree. The children’s curiosity about “how Christmas trees [got] started” leads to a fascinating discussion of the historical role “decorated trees and branches” have played during the holiday season.  As far back as the Middle Ages, decorated evergreens were used during church plays and transitioned into people’s homes after the plays were no longer performed. It’s interesting to learn about the varied forms of the evergreens and shrubs as more people brought the plants indoors for decor. The children’s questions guide the family’s discussion naturally and fluidly in a gentle way that doesn’t feel like the reader is getting a “lesson.” We learn of other major transitions: the arrival of the Christmas tree in America, the addition of lights on the tree, and even the evolution of the Christmas tree stand. One piece of history is particularly delightful (and a matter of presidential importance) but you’ll have to get the book to find out!

Though much of the book presents factual information, the story arc takes readers from beginning to middle to end as we watch the family purchase, transport, and decorate their tree. The addition of the grandmother in the second half of the book adds a personal touch to the historical facts as she shares with her grandchildren her memories of Christmas trees long ago. As always, dePaola’s muted color palette, familiar shapes, and soft lines provide warmth and comfort to his words.

Perfect for school reports or for quelling those myriad questions from curious little ones, Tomie dePaola’s Christmas Tree Book will both educate and entertain. Click here for bonus materials from the publisher’s website. 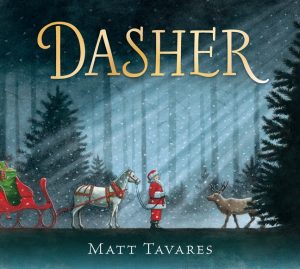 Growing up as part of a demanding traveling circus is not much of a life for Dasher, a little doe with an adventurous soul. The harshness of hot days does not compare to the magical place in Mama’s stories where the weather is cold, the air crisp, “and the ground was always covered with a cool blanket of white snow.” Dasher’s days are filled with meeting children which she loves. At night, however, surrounded by her family, she wishes upon the North Star for the home Mama has described.

When one windy night’s unusual circumstances bring Dasher into contact with Santa and his tired horse, Silverbell, it’s as if her wish were answered. Because his sleigh filled with massive amounts of toys is getting too heavy for just Silverbell, Santa invites Dasher to help pull his sleigh. There’ll be no looking back now. Only something is missing. Her family. Of course, Santa makes that wish come true, too, when he takes Silverbell and Dasher back to the circus and invites Dasher’s family to join the sleigh. Now everything’s in place for Christmas to be perfect!

Dasher, the wonderfully imagined and illustrated tale of Santa’s team of reindeer—before Rudolph came along—feels believable and satisfying. The old-fashioned look of the art (done in watercolor, gouache, pencil, and pastel) depicting J.P. Finnegan’s Traveling Circus and Menagerie and filled with rural folk dressed in their late 19th century garb, adds to the feeling the story is real. Youngsters will be easily convinced, too, and love the lyrical way Tavares has woven together all the threads of this charming origin story so skillfully. Let yourself be transported back in time with this clever tale that will have you convinced this is exactly how Santa’s reindeer Dasher, Dancer, Prancer, Vixen, Comet, Cupid, Donner and Blitzen came to pull Santa’s sleigh.