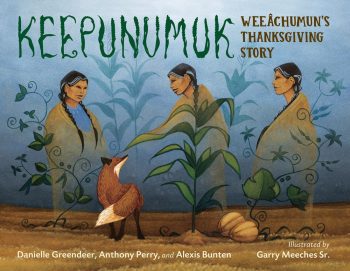 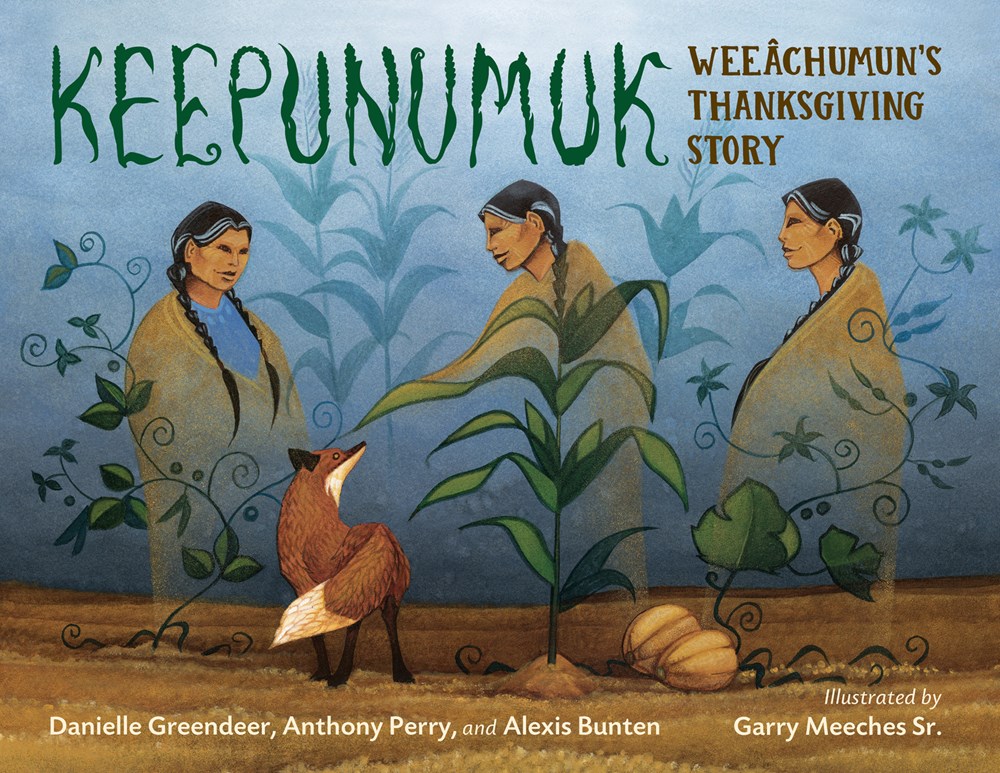 Four Native American creators weave together the story of Keepunumuk, the time of harvest.
In this Wampanoag story told in a Native tradition, two kids from the Mashpee Wampanoag tribe learn the
story of Weeâchumun (corn) and the first Thanksgiving.

The Thanksgiving story that most Americans know celebrates the Pilgrims. But without members of the
Wampanoag tribe who already lived on the land where the Pilgrims settled, the Pilgrims would never have
made it through their first winter. And without Weeâchumun (corn), the Native people wouldn’t have helped.
An important picture book honoring both the history and tradition that surrounds the story of the first
Thanksgiving.

This is the book I’ve been waiting for. This is the Thanksgiving story I’ve needed to read and I hope you’ll feel the same way I do. It’s a book to return to every year so the important perspective shared can become as ingrained in our culture as other holidays whose origin stories were incomplete. What I loved best was how the four authors and illustrator, all First Peoples, conveyed this fresh, honest look at Thanksgiving using the same storytelling tradition that has passed from generation to generation for thousands of years. This meaningful tale is presented from the point of view of the vital corn (Weeâchumun) and will pull readers into following along to learn how the first Thanksgiving came to be.

Keepunumuk begins with young Maple and Quill enjoying being outdoors in the garden. They are from the Mashpee Wampanoag tribe of Massachusetts. The rich colors hint at the time of year, one not only of a seasonal change but of a time long ago when the Pilgrims arrived. The children ask their grandmother (N8hkumuhs in the Wôpanâak language) about what vegetables to pick. She thinks corn, beans, and squash, also known to Native Americans as the Three Sisters, are a good choice. She also shares a story about what some call the first Thanksgiving but to the First Peoples it’s always been known as harvest time or Keepunumuk.

Corn’s voice came alive as it described how soon word went round that the Pilgrims planned to stay but were unprepared for the harsh winter. They suffered from a lack of food too. The corn, beans, and squash as well as animal friends including fox and rabbit, duck, and turkey grew concerned.

Over the next few nights, Weeâchumun sent
dreams to the First Peoples with a message:
Bring me and my sisters to the newcomers.
They are hungry and need help.

The First Peoples sent their leader to meet with the newcomers (see illustration above). Then he asked Tisquantum, also known as Squanto, to teach the Pilgrims how to plant and grow their native vegetables, the Three Sisters corn, squash, and beans. This was instrumental in their survival and also where the Pilgrim’s take on the three-day celebration of Thanksgiving arose. Readers also learn that to the Wampanoag it was a time of mourning, not one of giving thanks.

It’s explained that while there could not have been a Thanksgiving without the help and guidance of the Wampanoag people, it came at a great cost to them. Many caught illnesses brought over by the Pilgrims and died. And of course, there were wars with settlers as they moved onto and claimed more and more of Native American land. The landscape of America was forever changed after this. At the beginning of the book there is a helpful glossary. Back matter explains how the story of Thanksgiving has been passed on, how the Wampanoag celebrate more than one harvest feast, and how they honor nature and those who have passed into the spirit world by offering Spirit Plates of food in gratitude. I am grateful this book is in the world and can become a part of home, school, and public library collections. Like its gorgeous atmospheric art throughout, this book will add warmth and a greater understanding and appreciation to any Thanksgiving celebration. Having the Wôpanâak language included grounds the story as does the photo of the real-life Maple and Quill.

Learn More About the Authors and Illustrator: