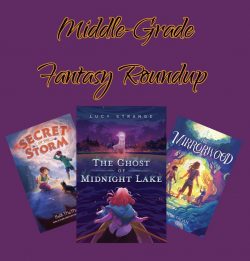 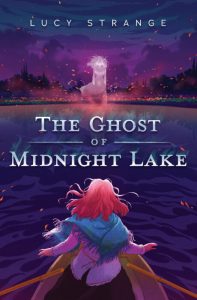 The spooky middle-grade novel, The Ghost of Midnight Lake by best-selling author Lucy Strange, stands out because of its interesting and unpredictable riches-to-rags plot. Set in 1899, the story opens with twelve-year-old Lady Agatha Asquith’s world falling apart after her father, the Earl of Gosswater, dies. Cruel cousin Clarence (who inherited everything) states that since Agatha’s not really an Asquith she must get out. Shocked, Agatha struggles to come to terms with this news as she’s abruptly moved in with her possible biological father, a poor goose farmer, and (maybe) thief. Though Agatha yearns to hear the truth from him, he’s closed-lipped.

At the Earl’s funeral on Skelter Island, Lady Agatha realizes there is no going back and decides to try embracing her new life, renaming herself Aggie. She soon makes her first-ever friend—Bryn, a boy who works on this cemetery island—but cannot find the words to tell him her real identity.

As Aggie tries unraveling her history, she begins seeing a female spirit. Is this her past self? The ingenious plot shows Aggie’s growth from pampered to strong-willed where she bravely takes charge, seeking answers and forging her path forward. Gosswater’s a place with harsh contrasts between the aristocrats and the peasants. In this small community, the paths people live (determined mainly by their social status) differ dramatically.

Aggie and Bryn are very likable characters and their bumpy road as friends feels truthful. Some of my favorite elements include the presence of geese throughout and the contradicting information that Gosswater is either named after the geese there or after the ghosts! Susan the goose is quite a character, playing a significant role in this thrilling story.

Whether it’s a real ghost haunting Aggie or merely her past, this fascinating story about family, friendship, and self-discovery is one that will keep you enthralled as you follow Aggie into the uncertain future filled with lies, secrets, and one charming goose! 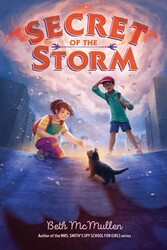 In Beth McMullen’s middle-grade fantasy, Secret of the Storm, twelve-year-old Cassie King has lost everything lately: her father’s sudden death turned her mother into a shell of herself, and Cassie’s BFF now hangs with the cool girls. The future seems hopeless until some freaky weather, a scraggly kitten, and the school outcast, Joe Robinson, set Cassie on a new trajectory.

A mystery begins to unfold as the kitten, Albert, shows some decidedly un-catlike traits. During Cassie and Joe’s after-school volunteer duties at the town library, they suspect their beloved librarian may be hiding information related to recent, unusual activities. (Take a peek at the cover image for a clue about Albert’s secret!)

Beth McMullen accurately captures Cassie’s pain as well as the relief in her developing friendship with an unlikely classmate—depicting how a person’s perceptions can change. Still, Cassie struggles with whether to be a bystander or to do something when popular kids pick on individuals who don’t fit in. Woven in with the fantastic upheaval brought on by her unusual kitten are realistic friendship and family problems.

Short chapters with lots of action make this an ideal book for young middle-grade readers. Older kids will enjoy this story as well; even if they clue into the “secret of the storm” early on, the book is heartfelt and unpredictable enough to provide engagement throughout. 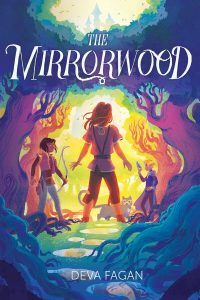 I had to read Deva Fagan’s middle-grade fantasy, The Mirrorwood, because of the back-jacket blurb: “I was wearing my sister’s face on the night the hunters came to our cottage.” Awesome, right?! The Mirrorwood is an enchanted land sealed in with a wall of thorns where the inhabitants are locked in time under the rule of a demon-prince—kind of a twisted Sleeping Beauty. The main character, twelve-year-old Fable, has been cursed by magic that leaked from the Mirrorwood and does not have a face of her own; to stay alive, she needs to take faces from others.

Luckily, her loving family hides and helps her but there’s only so much they can do before hunters arrive to eradicate people like Fable (who are called “blighted”). Vycorax, an apprentice near Fable’s age is charged with destroying Fable, however, circumstances set these adversaries on a path where they seem to share the goal of freeing the Mirrorwood from its curse. The dynamics between these two girls are tensely portrayed.

One of my favorite characters is Fable’s fearless cat, Moth, who accompanies her into any situation, able to communicate with her telepathically. Cat people will appreciate Moth’s perfectly catty lines as he adventures along with Fable and Vycorax.

Strong female lead characters, friendship, family, coming-of-age, and adventure make this a well-rounded book that will keep you guessing who’s the bad guy and whether Fable’s wish to have her own face will ever come true. Fagan does an excellent job portraying realistic, dimensional characters in a familiar yet modern fairy tale. I would happily follow Fable onto more stories. This book may be better for older middle-grade readers because of the plot turns and creepiness of face-stealing.