THE BOY WHO DREAMED OF INFINITY:
A Tale of The Genius Ramanujan 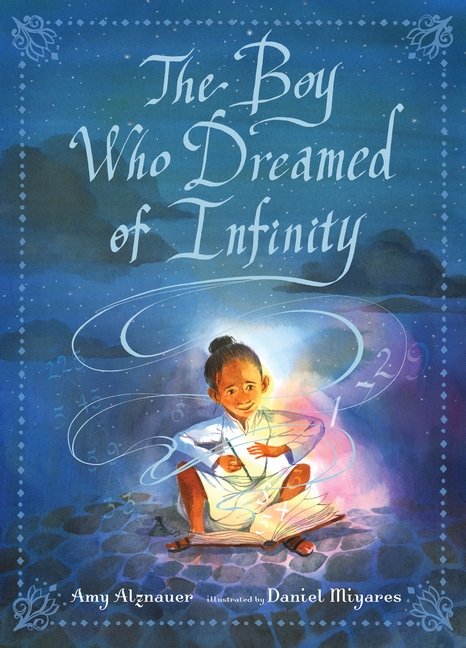 Did you know Srinivasa Ramanujan was one of the greatest mathematicians the world has seen? I didn’t, but was thankful to come across The Boy Who Dreamed of Infinity by Amy Alznauer and learn a little bit about this man whose amazing accomplishments are still studied today.

Born in a small South Indian village in 1887, Ramanujan began questioning the world at an early age: “What is small? And what is big?” He spent endless hours writing and erasing on his slate, trying to capture his thoughts about numbers and size. “Ramanujan was a number theorist, a person who studies the properties and patterns of numbers.” This book’s examples make these large concepts easy to understand such as when Ramanujan takes food to the man by the river who claims to see odd creatures that aren’t there. To this, Ramanujan says, “Sometimes even invisible things can be real.” Kids can relate to this while their parents have a greater understanding of what Ramanujan meant.

This self-taught genius felt alone with his thoughts until reaching out to Cambridge University in England because of its great mathematical center where he finally connects with top mathematician, G. H. Hardy (whose pamphlet on infinity Ramanujan had recently discovered). Just six years after making that connection, Ramanujan died in 1920, at the age of thirty-two. “The profound originality of his ideas has been a source of inspiration for mathematicians ever since.”

Daniel Miyares’s lovely illustrations show us Ramanujan’s India blended skillfully with the boy’s thoughts. One of my favorite scenes discusses how numbers whisper to Ramanujan in his sleep; he tries catching ideas before they disappear. The accompanying art has multiple images of Ramanujan leaping and climbing on numbers, set against a night sky. Get this book for the kid in your life with big thoughts—whether anyone else can see them or not.