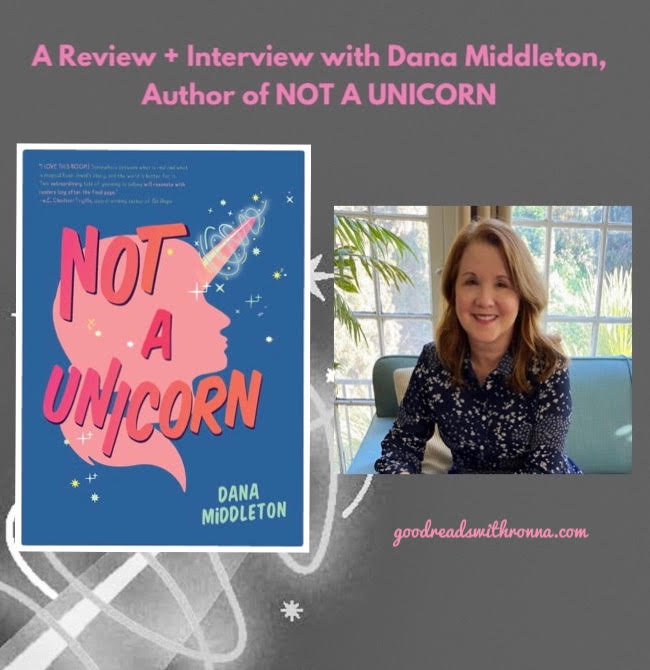 A REVIEW PLUS AN INTERVIEW 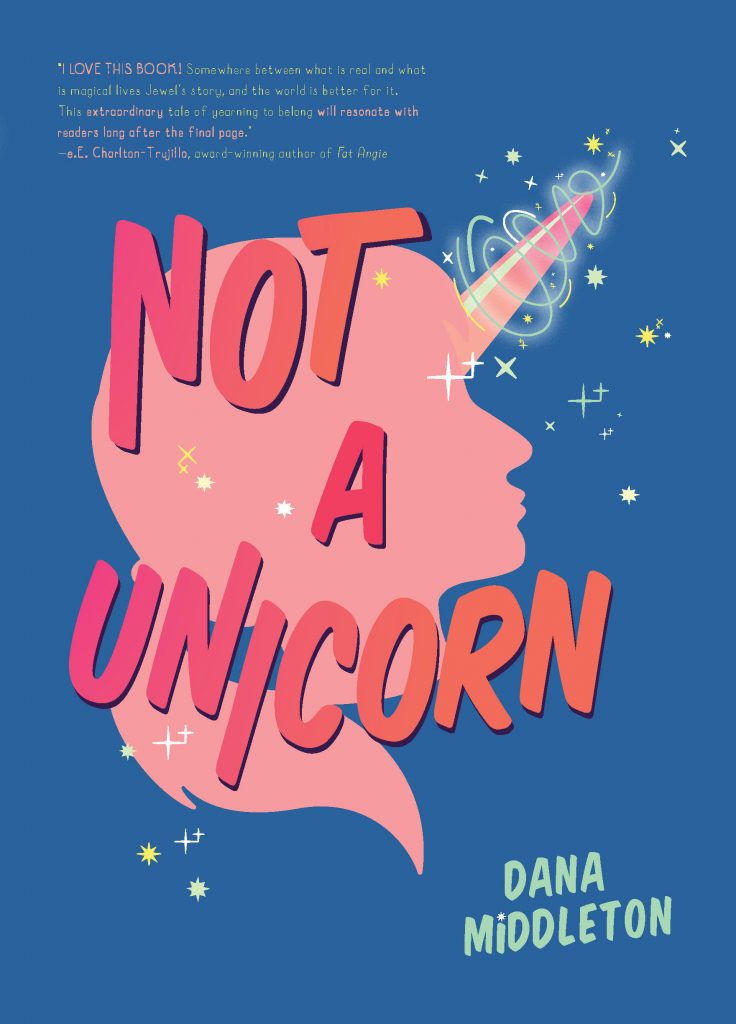 Dana Middleton’s third novel will delight middle-grade readers who enjoy a story that blends contemporary issues with just the right amount of magical realism and likable, relatable characters who would be fun to hang out with.

Readers learn early on that the main character, Jewel, age 13, has a unicorn horn on her forehead. Her friend Mystic  likes it because it makes Jewel different, the way she feels and Nicholas believes it’s cool and magical. “Are you kidding?” he tells her at one point, “You don’t have to have a horn to be different.” These three spend their time at the “freak” table (where Jewel has found refuge following an unintentional impaling of a fellow student who survived), discussing ‘the horn,’ comics, the upcoming French essay competition, and the popular kids. As the story progresses, Carmen, Jewel’s invisible magical guardian unicorn begins to play more of a role in the plot.

In her apartment, Jewel lives with her mom, and early on her grandmother moves in and shares her bedroom. The family is portrayed as lower-class where money is tight and Jewel’s mother wants her to have a better life. “You are going to graduate from college. Got it? You’re not going to end up like me.” While they clearly care for Jewel, they don’t seem to grasp how much Jewel struggles with the horn and wants to have it removed. But doing so involves great risk. It also means a huge expense, a trip to Los Angeles, and initially going behind her mother’s back.

As the story unfolds, Jewel’s lost friendship with her former best friend Emma rears its head again at the prospect of her horn being surgically removed and becoming popular. Complicating things is Mystic’s stealing a necklace from Emma’s pal, Brooklyn, the ultimate popular girl. There’s so much for Jewel to consider and weighing heavily on her is having been offered a chance to tell her “horn” story in French at the competition she has dreamed of.  At the same time, calling attention to it will make her feel like she doesn’t fit in even more, and reconciling those two feelings are taking their toll on her. Additionally, it turns out that reuniting with Emma may not be all Jewel hoped it would be.

The good news is that Jewel ultimately gets her wish and has her horn removed in Los Angeles. But the horn, it seems which bonded her to Carmen, will kill the unicorn unless she can find a way to save her.  It’s here Dana has cleverly tied in a graphic novel that Jewel has been working on with Nicholas called Highwaymen. When the storyline mixes the graphic novel into the quest to save Carmen, there is action and adventure around every turn that will keep readers in suspense in the best possible way.

I loved how when the book ended, the characters stayed with me and filled me with hope. The thoughtful and exciting journey Jewel took brought her to a place where she could finally embrace her horn and her uniqueness. Coming to terms with what made her different ends up being the biggest and most satisfying magic Jewel, and readers, experience.

Since I could not put down Dana’s latest book I felt compelled to ask her some questions to satisfy my curiosity. I hope you’ll scroll down now or return to the interview below when you’ve finished reading Not a Unicorn.

GoodReadsWithRonna: Welcome to the blog, Dana. I’m thrilled to discuss your latest middle-grade novel, Not a Unicorn. Do you recall how the idea for it came to you?

Dana Middleton: Actually, it was all Jewel. This girl with a unicorn horn showed up in my mind and wouldn’t let go.

GRWR: Was it a long time until you fleshed out the story?

DM: It did take quite a while, in part because I thought the idea was so weird and I wondered if people would get it. And then I thought, maybe people would think I was weird, too! Like Jewel, I had to accept all the parts of me (even the weird ones) to be able to write this. I was sure about one thing early on though—that there would be three parts to this story concerning Jewel’s horn. I won’t spoil it here, but that initial structure never wavered. I knew how it had to go, but I wasn’t sure if I could write it.

GRWR: One of my favorite parts of the story is the friendship between the main characters, the “different” kids Jewel, Mystic, and Nicholas. I love how they stayed with me after the story ended because I thoroughly enjoyed spending time with them. What did you draw upon when writing them?

DM: I thoroughly enjoyed spending time with them, too! Nicholas was loosely based on a friend of my nephew’s, and Mystic came from someplace unknown. And then Carmen, Noah, and Tall Ethan wandered in. I felt like it was so important to get these characters right because each of them had such a profound effect on Jewel.

GRWR: I’m a Francophile like Jewel. Is there any of you in her or maybe the popular girls like Brooklyn or Emma?

DM: Like you, I am a Francophile! I studied French and even went to study at the Sorbonne for a summer during college. I always wanted to travel and by imbuing Jewel with this desire, it created conflict because of course, she felt like she couldn’t be seen in big spaces. I always had this picture in my mind of Jewel looking up at the Eiffel Tower because she’d become brave enough to go there.

And as far as Brooklyn and Emma are concerned, I definitely wasn’t either of them. But Brooklyn, that girl turned out okay. She became someone I didn’t quite expect.

GRWR: How did your hometown in Georgia influence the setting or anything else in the novel?

DM: My family moved to the mountains of North Georgia (to a town called Dahlonega) when I was a teenager and that’s the town where Jewel lives. It’s a mixture of Dahlonega past and present, and some of it made up in my mind. I thought if you had a unicorn horn on your head, it would probably be best to live in the relative safety of a small town. That also created for Jewel more fear about the possibilities of venturing into the outside world.

GRWR: Can you speak to what it was like incorporating the graphic novel/comic you created called Highwaymen into the plot?

DM: Let me just say that Highwaymen was a complete surprise to me. I had no idea how that would develop in the story but it kept developing into something and I kept following. I really love Highwaymen, and like Jewel, I have a soft spot for Esmeralda. She’s so bad-ass awesome!

GRWR: What was the biggest challenge you faced when writing Not a Unicorn?

DM: Trusting that it would all work out. I guess a lot of writers feel this way, but sometimes I wasn’t sure I could make this book what I wanted it to be. I was very blessed to have an agent and editor who believed in Jewel and helped me to make it the best book that I could.

GRWR: If young readers took away one thing from your novel, what would you hope that would be?

DM: The best question for last! I hope this book helps young readers accept who they are more deeply. Because we all have something that we just wish we could change— it may not be a unicorn horn, but it’s something. If Jewel can help someone accept their ‘difference’ and make it into their superpower, then my job is done.

My sincere thanks to Dana for taking the time to chat with me about Not a Unicorn. Here she is below with author Jill Diamond during her virtual book launch. 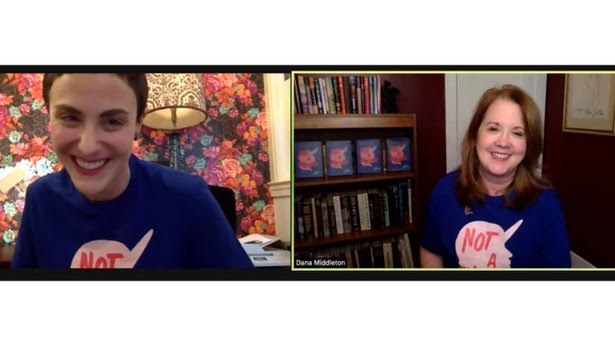 Dana Middleton is a middle-grade author of contemporary novels for young readers who enjoy a dash of fantasy and mystery. Her latest book, Not a Unicorn, is from Chronicle Books. She is also the author of The Infinity Year of Avalon James (a Young Hoosier Book Award nominee and Oregon Battle of the Books selection), and Open If You Dare. Dana grew up in Georgia, but lives in Los Angeles with her British husband. You can visit her online at danamiddletonbooks.com.