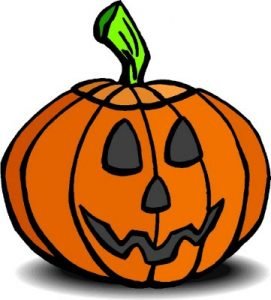 This seven-book roundup covers wickedly wonderful Halloween season reads. From a gentle book about the fall season to spooky ghouls, goblin-witches, ghosts, vampires, a witch’s hut, and a haunted house, we’ve got you covered. 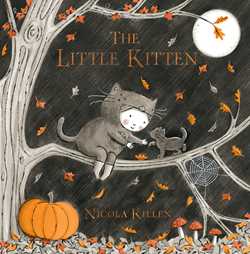 With whimsical art in blacks, whites, and grays offset with oranges and foil accents, The Little Kitten embodies the spirit of autumn. Leaves blow across the pages, bringing movement that propels Ollie on her adventure. As promised by the title, there is a little kitten, but also Ollie’s cat, Pumpkin. Nicola Killen’s art and storyline

beautifully convey the playful, loving spirit of this book. It’s a pleasure to see a gentle story that’s engaging and fulfilling—it even has a surprise ending, shh! 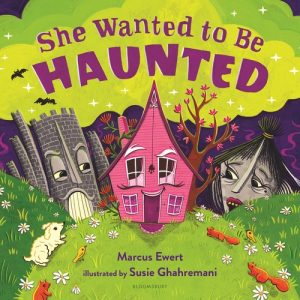 SHE WANTED TO BE HAUNTED
Written by Marcus Ewert
Illustrated by Susie Ghahremani
(Bloomsbury; $17.99, Ages 4-8)

I’m a sucker for a great book title and just had to read Marcus Ewert’s She Wanted to Be Haunted—plus, what a great idea! As promised, Clarissa, an “adorable and pink” cottage finds herself disappointed with her appearance. Her father is a castle and her mother a witch’s hut, but Clarissa got the short end of the broomstick with her undeniable cuteness. “Daisies grew around her, / squirrels scampered on her lawn. / Life was just delightful! / —and it made Clarissa yawn.”

What kid hasn’t felt bored when things were mellow and nice? Susie Ghahremani’s hand-painted artwork brings Clarissa to life in (dreaded!) upbeat colors. Inside, on Clarissa’s fuchsia, wallpapered walls, we sneak a peek at her family’s photos and, yes, she’s surely the oddball of the bunch. My favorite scenes involve the surprise ending. If you want to know if Clarissa’s attempts to gloom-down her appearance work, you’ll have to read the book. Trust me, the ending is awesome! Click here for a coloring page. 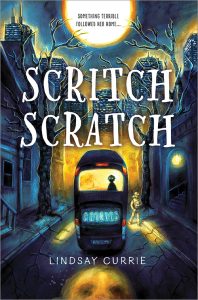 Scritch Scratch—the title of this middle-grade novel by Lindsay Currie will get under your skin as all good spooky books should. Because, of course, this sound is made by the ghost haunting Claire. Prior to this, science-minded Claire absolutely did not believe in ghosts and found her Dad’s ghost-themed bus tour and book embarrassing. So why did this ghost choose her? Claire’s too afraid to sleep and should have plenty of time to solve this mystery. However, since her BFF’s hanging around with the new girl, Claire may need to figure it out alone.

I’ve never been on a haunted bus tour, but, after reading this book I want to if they’re all as interesting as the one in this story. “Forgotten” facts about Chicago are cleverly woven in—what a great way to sneak in a history lesson! Click here for a discussion guide. 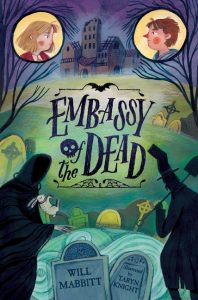 EMBASSY OF THE DEAD
Written by Will Mabbitt
Illustrated by Taryn Knight
(Walker Books US; $16.99, Ages 8-12)

This book opens with a warning from the Embassy that “[b]y signing, you hereby accept all responsibility for any death, dismemberment, or condemnation to the Eternal Void that results from reading.” How irresistible! When Jake Green receives a kind of creepy package in error, a fun adventure ensues dodging bonewulfs and their master Mawkins (a grim reaper). Accompanied by ghosts Stiffkey, Cora, and, an adorable fox named Zorro, the unlikely group tries to avoid being sent into the Eternal Void—a fate worse than death.

Will Mabbitt’s well-developed characters are very likable and Taryn Knight’s art plays up the humor. I appreciate the Embassy of the Dead’s new ideas about ghosts and their companions such as Undoers (someone who helps a ghost trapped on the Earthly Plane move on to the Afterworld). Mabbitt nails a perfectly written ending. I’ll gladly follow Jake and his friends onto the next book in the series. Click here to read a sample chapter. 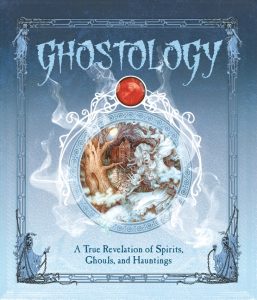 Fans of the beautifully made Ologies series won’t be disappointed in the latest addition, Ghostology. Packed full of stories, this book will keep you haunting its pages because there’s so much information from psychics and mediums, to fakes and frauds. Want to know what’s in a ghostologist’s field kit (sketchbook, accurate timepiece, and, of course, a ghost-detecting device, just to name a few items), or how to hunt ghosts? You’ve come to the right place. Pay attention to the “Types of Ghosts” chapters.

Beyond reading, the book is a sensory experience with its sealed pages, official documents envelope, flaps, and textures. If there’s such a thing as a coffee table kid’s book, this is it. The icy blue color scheme of the cover is offset by a large faceted red “gem.” Raised letters just beg you to run your hand over them and invite you to look inside. The thought and detail in this book are phantom-astic! 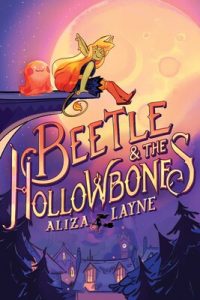 In Aliza Layne’s middle-grade graphic novel, Beetle & the Hollowbones, Beetle is a twelve-year-old goblin-witch being homeschooled by her gran. Beetle, however, would rather hang out with her current BFF Blob Ghost at the old mall (where they are inexplicably trapped). When Beetle’s previous BFF, Kat Hollowbones, returns home after completing her sorcery apprenticeship at a fast-track school, their friendship isn’t the same. Kat’s aunt Marla is the wonderfully drawn skeletal antagonist.

With well-developed characters and plenty of action, this fast-paced book will bewitch you. The struggles of moving through school and friendships falling apart are accurately depicted. The panels, grouped into chapters, capture your attention with their fantastic illustrations, engaging colors, and lively text. I like how Layne includes some concept art at the end, inspiring other artists with a behind-the-scenes peek. 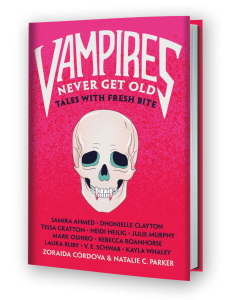 Vampires Never Get Old: Tales with Fresh Bite is a YA short story anthology with the goal to “expand on and reinvent traditional tellings.” How awesome is that?? Editrixes Zoraida Córdova and Natalie C. Porter’s story, “Vampires Never Say Die,” is a suspenseful, modern tale about a teen and vampire who meet online. They also provide the introduction and insightful commentary after each piece, delving into the many areas of the vampire myth. There are so many wonderful things in this collection; I’ll give you a few nibbles to whet your appetite.

“Bestiary” by Laura Ruby is set in a near dystopian future; Jude works at the zoo and has a special connection with animals. This story stood out for me because the reader must piece together the truth. It’s quite a different twist on thirst and the theft of blood and humanity.

“Seven Nights for Dying” by Tessa Gratton opens with the line, “Esmael told me that teenage girls make the best vampires” (because they’re “both highly pissed and highly adaptable, and that’s what it takes to survive the centuries”). We follow Esmael’s chosen girl through a week of uncertainty as she considers joining the undead. This cleverly layered story demands to be reread to truly appreciate Gratton’s well-crafted words.

Weaving in old superstitions, “The Boy and the Bell” by Heidi Heilig expands upon the Victorian tradition of burying their loved ones with a bell (allowing them to call for help if mistakenly buried alive). Set at the turn of the century, Will is a graverobber for all the right reasons—he wants to become a doctor, and “acquiring” freshly buried bodies allows him to trade for a spot at the back of the amphitheater where dissections take place. With only a few glimpses at Will’s thoughts, we find out volumes about his struggles.

This anthology breathes life into the short story and lets readers appreciate the many perspectives and styles from a very talented array of writers. My favorites tend to have unexpected endings. There’s something for everyone. Just read it already!