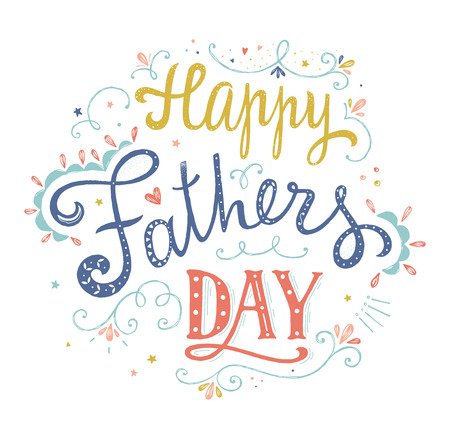 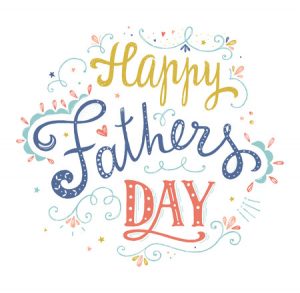 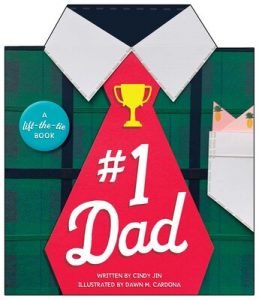 A fun spin on the classic Father’s Day gift of a dress shirt and/or tie, this unique rhyming board book invites little ones to lift the tie (flap) and reveal which trophy goes to dad for the things he’s so good at. Whether a father excels at making repairs, cooking, styling hair, or reading bedtime stories, #1 Dad probably covers something a father can claim is his specialty. Paper-cut artwork adds to the enjoyment of this entertaining celebration of dads. 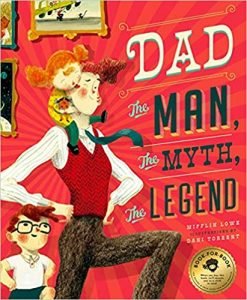 The beautiful pastel colors of oranges and reds carry the heroic red-headed father and his red-headed kids through a magical story of what makes up a true hero in the newly released Dad: The Man, The Myth, The Legend. Mifflin Lowe and Dani Torrent’s picture book begins with portraits on the walls in the family home depicting a superhero father like no other. He lifts cars above his head; travels to the moon; and is stronger than Sasquatch and Thor. Mom says he is a legend in his own mind, Lowe writes which is a pretty great description of many dads.

One great example of this larger-than-life father is when he gets tangled in a hose and his son sees him as Tarzan. This sweet story for young readers makes a big statement that no matter what Dad does, and however mad he may make Mom (speeding in a minivan is not the same as driving a race car), Dad will always be amazing. One of Torrent’s most heart-warming illustrations is of the boy and his sister on Dad’s lap reading with his eyes closed. Dad can do no wrong even when sleeping! And no matter how much Dad drives Mom crazy, she says it just makes her crazy about him. And, if you purchase this book Bushel & Peck will donate another to a child in need! 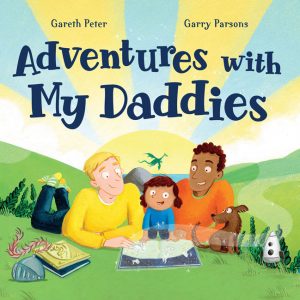 ‘My daddies are amazing—the world’s best king and king,” says the brown-haired child with big brown eyes in Adventures With My Daddies written by debut author Gareth Peter and illustrated by Garry Parsons, illustrator of the best-selling series The Dinosaur That Pooped. The Daddies in this blended family are not the best at everything, but our young narrator really doesn’t care. The Daddies tell adventurous stories But my daddies’ favorite story is … the one that brought them me. Peter’s rhyming text takes the reader on exciting adventures, with colorful illustrations of roaming hills of green grass and deep blue oceans. This LGBTQ+ and adoptive family story shows the power of familial love whether a child has two moms, two dads, or one mom and one dad. What a lovely, upbeat story about diversity and inclusiveness. Click here for an activity sheet. 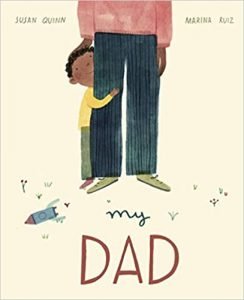 My Dad is another newly released lyrical rhyming text taking the reader through the one-of-a-kind relationship between a boy and his dad (and the orange cat who is often close by). The sweetness of everyday activities is simply conveyed, like Dad making mornings special because he loves to bake, while the young boy leans his head on the counter with a smile on his face watching Dad pull the cookies from the oven.

Ruiz’s warm color palette brings added charm to this touching story. Delightful detail is shown in the artwork, as the boy sits with one cat slipper on while the other has fallen to the floor (and, of course, the cat stares at the mysterious cat slipper in awe). Dad has the magical ability to make everyday tasks such as shopping, which he says is boring, into an adventure where they pretend they are in the jungle looking for tasty food to eat. The imaginative take on people in line at a store surrounded by monkeys and tigers will make every child eager to go shopping with Dad. This comforting bedtime story for any dad to read to his child reinforces how special the father-son bond can be. 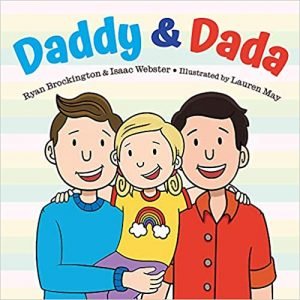 This picture book was written as a love letter to daughter Rumi, and soon to follow son Xander (that is with an X, not a Z as our main character teaches the reader) because authors Ryan Brockington and Issac Webster were unable to find a story about families similar to their own. Illustrator Lauren May depicts framed photos on a wall of all kinds of families because every family is unique in its own way. The take-away from this story is that the most important thing is being raised with lots of love, no matter who you call your parents.

Rumi’s daddies play different roles in her life. Daddy sings her songs, while Dada reads her stories but They both love me THIS much as May illustrates Rumi’s arms opened wide. The family of five—we can’t forget adorable black and white dog Betty—goes for hikes together, while other families eat ice cream or play basketball. May’s illustrations, created with Photoshop Elements, show all sizes and colors of families. The story ends with Rumi sitting on the floor with her green cape and the words Tell me about your family. This conversation starter is a fabulous way for parents to discuss their own family dynamics, or maybe a relative or friend’s family. It is also a perfect school art assignment for young kids.

Other Recommeded Reads for Father’s Day or any day to celebrate dads: 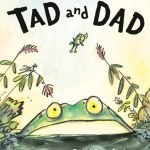 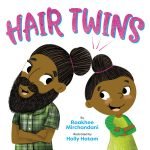