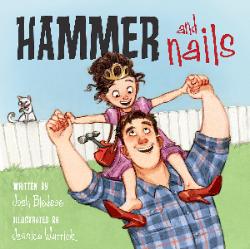 Hammer and Nails
Written by Josh Bledsoe
Illustrated by Jessica Warrick
(Flashlight Press; $17.95, Ages 4-8)
Josh Bledsoe wrote this story about my husband, or at least he could have because the father in Hammer and Nails (love the wordplay in this title) has a heart of gold with a touch of pink. When his daughter’s playdate plans fall through, it’s dad to the rescue, declaring a daddy daughter day. The pair agree to trade off on completing their lists of activities they’d intended to do before things changed.

If you’ve ever known a father to play dress up with his daughter and even agree to have his hair and nails done, you’ll find that guy here, bonding beautifully with his child. At the same time, the dad asks his daughter to step outside her comfort zone to pound some nails into loose boards on their fence amongst other chores. “Princess, sometimes things you’ve never done end up being fun. Try it.” Everything about Hammer and Nails is fun and upbeat from Warrick’s silly scene of a laundry fight to daddy and daughter getting down with some celebratory moves. With each new page turn, this book will fill young readers with the joy of experiencing quality and creative time spent with a caring dad.

Beard in a Box 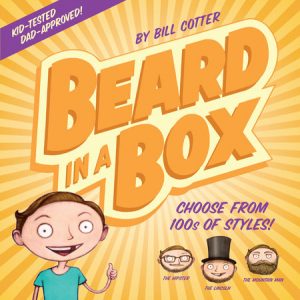 Written and illustrated by Bill Cotter
(Knopf BYR: $17.99, Ages 4-8)
Just when you think you’ve seen every kind of Father’s Day book, Beard in a Box arrives! A boy who is convinced the source of his dad’s coolness and power is his beard, decides it’s time to grow one of his own. Only he can’t, despite multiple imaginative efforts. Lo and behold, what should happen to be on TV while this lad is despairing his lack of facial hair – a commercial touting the amazing kid-tested, dad-approved Beard in a Box from SCAM-O. This simple five-step program appeared to work and there were all kinds of bristles available -from the Beatnik to the Biker, the Lincoln to the Santa. What the commercial failed to say was that after following all the required steps, the user had to wait 10-15 years to see results.

When little dude tells his dad how he was ripped off, he notices his father’s beard is gone. Can that mean his dad has lost his coolness? Maybe not with Cotter’s clever examples proving you can’t judge a dad by his beard! The hilarity of Beard in a Box begins with the cover and continues all the way through to the endorsements from satisfied Beard in a Box customers on the back cover: “Don’t take more than the recommended dose. Trust me on this.” – Bigfoot A not-to-miss new read for Father’s Day or any day you need a good laugh or your child yearns for a five o’clock shadow. 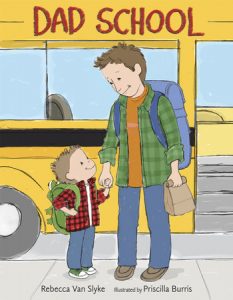 Written by Rebecca Van Slyke
Illustrated by Priscilla Burris
(Doubleday BYR; $16.99, Ages 3-7)
Kids go to school to learn their ABCs so when a little boy’s dad says he also went to school, the youngster figures it had to be Dad school. Van Slyke and Burris have teamed up again after last year’s hit, Mom School, to bring readers a glimpse of all the skills a father must acquire to parent successfully.

“At Dad school, I think they learn how to fix boo-boos, how to mend leaky faucets, and how to make huge snacks …” There is a lot of wonderful humor in both the text and artwork that will not be lost on parents reading the story aloud, especially the parts about dads learning how to multi-talk or their failure to learn how to match clothes, brush hair, and clean the bathroom. Dad School is totally entertaining from start to finish, only I wish it hadn’t ended so soon. I loved the little boy’s imagination and am certain your kids will, too. 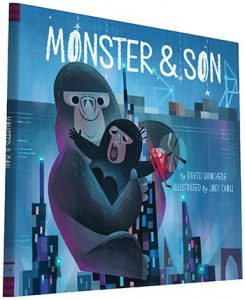 Monster & Son
Written by David LaRochelle
Illustrated by Joey Chou
(Chronicle Books; $16.99, Ages 2-4)
Here’s a fresh take on Father’s Day, a look at the father/son dynamic from all kinds of monsters’ point of view. Filling the pages of this wild ride are yetis, werewolves, dragons, serpents and skeletons sharing their own special, often “rough and rowdy” type of love.

Chou’s visuals are modern. They feel bold and imaginative with colors perfectly suited for a monstrous read. LaRochelle has written Monster & Son using well-paced rhyme that adds to the various father/son activities featured on every page. Whether stirring up waves for a game of catch or frightening off a knight coming to the aid of a damsel in distress, these monster dads all have one thing in common, and though it may be giant-sized, it undeniably love.

The Most Important Thing: Stories About Sons, Fathers, and Grandfathers 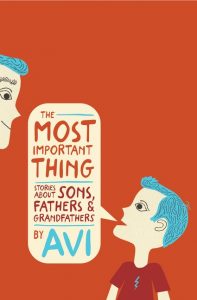 Written by Avi
(Candlewick Press; $16.99, Ages 10 and up)
This collection of seven short stories is sure to move middle grade readers and make them think about their own relationships with their fathers and grandfathers. According to the jacket flap, what the stories have in common is that they each explore the question: “What is the most important thing a father can do for his son?” Each story features a new character facing a different situation.

Stories flows easily one to the next meaning they can be read in one sitting or just one at a time. I’ve chosen three to highlight here. In the book’s opening story, Dream Catcher, Paul is an 8th grader who feels disconnected from his father. When circumstances require him to spend a week of school break with his estranged grandfather in Denver, Paul begins to understand the demons that have plagued his grandfather and caused the estrangement. Both Paul and his grandfather work together to forge a new relationship leaving the reader with hope that Paul’s father and grandfather may too at last be reconciled.

Beat Up introduces Charlie who has plans to attend a church dance despite a friend’s warning that gangs may be present. Though the dance goes off well, Charlie gets surrounded by a gang then beat up on his way home, only to be chastised by his unforgiving father for having pretended to be hurt and knocked out rather than fighting back and putting himself at greater risk. “Biderbiks don’t cry” is what Charlie’s dad believes, but Charlie is clearly not a coward for having sought a safe solution to his assault. Beat Up is a powerful tale of a son’s courage to speak up in the face of his father’s unjust fury.

Departed deals with the accidental death of Luke’s father before their camping trip that shakes up a family. When what appears to be the father’s ghost remains around the apartment, Luke realizes what he must do with his father’s ashes to set his soul free, and thus come to terms with his father’s passing. While there are not always happy endings, there are certainly realistic, satisfying, and sometimes heart wrenching conclusions offering much to learn from the various young men’s approach to life and the father/son dynamic. 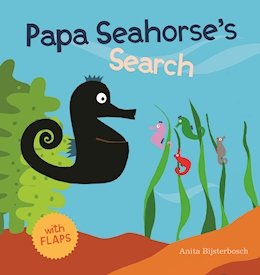 by Anita Bijsterbosch
(Clavis; $14.95, Ages 1-4)
A sturdy lift-the-flap counting book about a Papa Seahorse looking everywhere for his missing little seahorse. Numbers introduced range from 1-10 and the cast of characters making appearances behind and in front of the assorted flaps include a colorful puffer fish, sea turtles, angelfish, sea snake, crabs, a sea anemone, jellyfish, octopuses and shrimp. This book will provide interactive fun for pre-schoolers and toddlers alike. 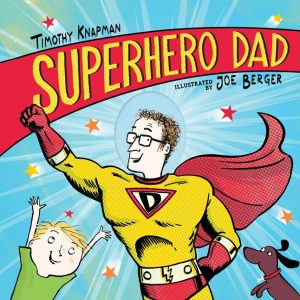 Superhero Dad
Written by Timothy Knapman
Illustrated by Joe Berger
(Nosy Crow; $15.99, Ages 3-7)
Kids will relate to the main character’s über admiration for his father in this rhyming read-aloud, Superhero Dad. Though not a new concept, the idea of a dad who can make a super breakfast though he’s only half awake, or make monsters disappear, is one that is always appealing to children. Coupled with comic book styled artwork, and a definitely cool die-cut cover, this humorous take on what qualities qualify for superhero-dom is a fast paced, fun read that is sure to please for Father’s Day. 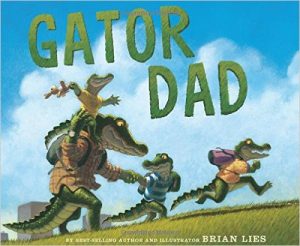 Written and illustrated by Brian Lies
(Houghton Mifflin Harcourt; $17.99, Ages 4-7)
If you’re looking for something original, this is it. The father in Brian Lies’ Gator Dad knows how to show his kids a good time and that’s evident on every wild and wacky gator-filled page. Intent on squeezing in the most fun a day can offer with his three gator kids, Gator Dad can make roaming aimlessly in the park an adventure, make bath time the best time, and make bed time stories come alive. It’s obvious this dad gains the greatest joy giving his gator-all in everything he does with and for his children.

Be Glad Your Dad…(Is Not an Octopus!)
Written by Matthew Logelin and Sara Jensen
Illustrated by Jared Chapman
(Little Brown BYR; $16.99, Ages 2-5)