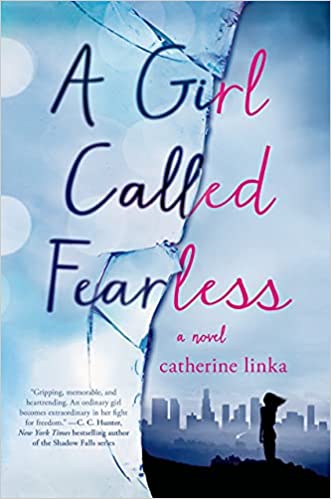 Avie Reveare is an average teen in a not-so-average world. Like most teens, she loves music, hanging out with her friends, and is especially close with her best friend Dayla, and a childhood pal, Yates, whom she may or may not be falling for (also typical of a teen).

The time is now and Avie is living a well-off life in Pasadena, California. However, this being dystopian fiction, author Linka has had to create a believable America unlike our present one. This one is still reeling from the aftermath of Scarpanol, a synthetic hormone that was used in beef and ended up killing fifty million women ten years earlier. The end result – young girls are a protected commodity, contracted for marriage often by the highest bidder.

Females have been losing their rights since the Scarpanol tragedy and the Paternalist movement, which threatens to control them entirely, is causing many teenaged girls to flee to Canada. When Avie’s father accepts a marriage contract offer for his daughter from Jes Hawkins, a massively rich Paternalist running for governor and one of the sleaziest characters I’ve seen in print recently, she realizes she too must make a run for the border. Readers soon learn that escaping the clutches of a wealthy, well-connected wannabe politician, is a lot easier in theory than in reality. Avie, with the help of Yates, is forced to go underground, but in doing will she rise to the occasion, get involved in a cause she’s tried to avoid or succumb to the emotional and physical consequences of escaping her forthcoming marriage?

With A Girl Called Fearless, Linka’s created a page turner for teens that will pull them into her world immediately and keep them reading because they’ll care about Avie and what happens to her; the urgency of her situation tenable. Teen vernacular is captured perfectly, and Linka’s use of song lyrics and the anger behind them is also employed successfully in the storyline.

“Better Learn My Name”
By Survival Instincts
…
I’ve got a hundred names,
But it all comes out the same
I’m someone’s prize possession
Not a person. An obsession

Is it the end of the world as Avie knows it or can something good come from all the malice boiling just below the surface of everyday dystopian life? I recommend getting this YA novel as a gift this holiday season for that teen who might otherwise be attached to a cell phone for the next two weeks.

Q & A With Catherine Linka:

What is your book about?

A Girl Called Fearless and its sequel, A Girl Undone, are about Avie, a junior at a girl’s school in Pasadena who comes home from school one day and finds that her dad has “Contracted” her to marry a man twice her age who she’s never met. The book is set in Los Angeles today, but assumes that ten years ago, synthetic hormones in beef killed most adult women in the US, so teenage girls have become the most valuable and protected commodity in the country. Avie must choose whether to get married or run for freedom in Canada.

We’ve seen a lot of strong girl characters like Katniss from Hunger Games and Tris from Divergent. How does Avie compare?

I wanted to write about a girl who’s not a superhero-style character. Avie’s a typical teenage girl suddenly thrust into a situation that tests her to the max. She doesn’t think of herself as “Fearless” even though her friend Yates likes to call her that. I felt it was important to show young readers that many of us don’t know what we’re capable of until we are pushed to our absolute limits. At the end of book one, Avie says, “I am fearless,” because she has survived.

Authors tend to put themselves into their characters. How are you and Avie related?

Well, I’m obviously not a sixteen-year-old girl, but Avie and I share a strong sense of what is fair and just. Avie’s been insulated from what is happening in the world around her until she is Contracted to marry a man who is running for Governor of California. As she starts to see how the Paternalist politicians are manipulating men’s and women’s lives, she feels she has to act somehow. She can’t sit back and do nothing. I couldn’t sit back and do nothing, either.

What has surprised you about the reaction to A Girl Called Fearless?

One thing I never anticipated was getting emails from readers as young as eleven and as old as eighty-five. Younger readers seem to enjoy the story’s action and adventure, while older readers see the historic and political parallels between Avie’s America and the real world. And I never expected guys to read the book or enjoy it. Never! I’ve also been surprised that both grandmas and teens have thanked me for showing Avie choosing to wait instead of having sex.

Yes, the books have been optioned and a series is in development. It’s fascinating–and a tiny bit scary– to see how a book is taken from the page to the screen, because the author has very little control. But the lead screenwriters are geniuses, so my fingers are crossed things will come out well.

What was your biggest challenge when writing the first novel- was it creating a believable epidemic, believable characters or something else altogether?

The biggest challenge was initially the book felt like two books–before Avie leaves Los Angeles and after. I united the halves by making the businessman that Avie is Contracted to marry into a candidate for Governor of California from the Paternalist Party. This strengthened the political theme and heightened the stakes.

You sure seemed to have had fun writing the role of Avie’s skeevy intended, Jes Hawkins – was he one of the easiest to write?

I adore writing villains. They can have big, bold personalities, and it’s much easier to create a villain who possesses positive character traits than it is to write a hero and give him enough flaws to make him believable.

In addition to Avie and Yates, there are so many interesting characters in your novel – her teacher, Ms. A, a priest, Father Gabe, her gynecologist, Mrs. Prandip and her underground connection Maggie. For me though, my particular favorites were those living in the rebel enclave of Salvation. Were you inspired by anyone or anything in real life when you conceived of this community?

When I wrote Salvation, I wanted to give voice to a part of America that values self-sufficiency, personal responsibility, religion, and freedom from government control. I was inspired by stories of frontier settlers, but I also read books and blogs written by survivalists who wanted to be off the grid.

Without a plot spoiler, can you give us a tease about what we can expect in the sequel, A Girl Undone?

Avie faces some tough decisions. At the end of A Girl Called Fearless, she makes a promise, but keeping that promise puts her life at risk. The first book was about Avie discovering her inner strength. A Girl Undone is about choosing between what is best for her and what’s best for the country.

Despite the publishing industry saying that they’ve moved on to other genres, dystopian-themed stories remain extremely popular with teens.  To what to you attribute this? What’s the appeal?

I think the publishing industry gets bored with genres faster than readers do, but that said, I believe “dystopian” stories are popular because they are high-stakes action/adventure stories. In many ways, they are monster stories where the monster is government or technology out of control.

How do you differentiate sci-fi, fantasy and dystopian fiction for parents who want to know what types of books their kids are reading?

When people think of fantasy, they often think of Harry Potter or Lord of the Rings where magic inhabits an Earth-like world. The conflict is often between those who practice good magic and those who use magic for evil.

Sci-fi differentiates itself from fantasy by offering a world transformed by advanced scientific technology, and the action often takes place away from planet Earth. Dystopian is usually set on Earth in the future, and involves a catastrophic event or technology fail that dramatically changed the society or government. The themes of both usually involve survival, or freedom from totalitarian control.

What is your current WIP?

Right now I’m reviewing the typeset pages of A Girl Undone that are due next week. I am also working with my publisher on how to make available a novella I wrote about Sparrow, a character from A Girl Called Fearless. We are considering putting it on Wattpad where readers could try it out for free.

Disclosure: I happen to know Catherine Linka who has reviewed many books for GRWR, however this did not influence my opinion about her novel.

Meet Catherine Linka on her Thank You Sciba Book Tour.
In appreciation for the support of indie booksellers this year,
she can be found signing her debut novel, A Girl Called Fearless,
and hand selling children’s and YA books at the following stores.
She’s the best at helping you find the perfect gift!
Be sure to pick up several copies of her book.

Nominated to ALA Amelia Bloomer Project, 2014

From the very first page of Complicit (St. Martin’s Griffin, 2014, $19.99, Ages, 14 and up), author Stephanie Kuehn keeps readers off-balance, trying to figure out what’s true and what’s right. The YA psychological thriller opens at 3:29 a.m. with the narrator’s phone ringing. “I like to be prepared,” Jamie says, “so I sleep with my phone beneath my pillow just in case someone calls. No one ever does of course.” But the phone is ringing, and already something doesn’t add up.

At breakfast, Jamie figures out the call was probably from his sister Cate, who has just been released from prison, much to the family’s dismay. Another problem for the reader: how could a teen do something so awful that even her parents and brother completely give up on her? On hearing that Cate is free, Jamie’s hands go numb, which is inconvenient because he has all sorts of routine high school activities planned for the day, including playing piano in the school jazz band. There’s nothing routine about the condition that occasionally makes his hands limp and useless, though: “even the big-shot doctors down at Stanford can’t figure [it] out”.

In other words, before the first chapter is over, it’s easy to like Jamie and empathize with him, but there are also already lots of questions about the past he shares with his troubled sister. It’s the beginning of a wild ride that forces the reader to consider the repercussions of shielding people from painful truths. Also, does hiding someone else’s bad behavior make you complicit in the crime?

I recommend this book to all teens and adults who like a thriller and can handle Hitchcockian violence — there are some horrors to imagine in Complicit, but the violence occurs off-stage. This is author Kuehn’s second novel. Her first, Charm & Strange, won the 2014 William C. Morris Award for outstanding YA debut.